The Iowa Secretary of State’s office altered how it publicizes monthly voter registration numbers after moving 294,000 Iowa voters to “inactive” status this spring.

For years, shareable graphics posted every month featured the number and partisan breakdown of active registrants in each Iowa Congressional district. Since May, Secretary of State Paul Pate has posted images with totals that include inactive voters.

The new approach obscures the fact that active registrants dropped by about 13 percent during the latest round of voter roll maintenance in April.

Under previous Iowa law, the Secretary of State’s office sent “No Activity” notices in April of odd-numbered years to “voters who have not voted in any election and have not updated their voter registration information in the past four years.” People whose card were returned as undeliverable were designated inactive, which is the first step toward being removed from the voter rolls.

But a wide-ranging election law Republicans enacted this year requires the secretary of state to send those mailings to anyone “who has not voted in the most recent general election and has not registered again or who has not reported a change to an existing registration.” (See section 25 of the bill.) “Registered voters receiving such notice shall be marked inactive,” the code now stipulates.

The Secretary of State’s office mailed notices to and inactivated 294,148 Iowans in April. Anyone who received the “No Activity” postcard could get back to active status by responding to the mailing to update their voter registrations.

Pate has downplayed the significance of the changes, tweeting in April that inactive voters “are treated the same as active voters when they go to vote,” and that receiving a “No Activity” mailing “does not affect anyone’s ability to vote in any election in 2021, 2022, 2023 or 2024.”

Yet the Secretary of State’s office apparently didn’t want to call attention to the large decline in active registered voters.

The Secretary of State’s office updates voter registration numbers on the first business day of each month. The full reports on the official website include both active and inactive voters and show totals by county, state House district, state Senate district, and Congressional district.

Pate also posts a map every month on his Facebook page and Twitter feed, showing the partisan totals for the four Congressional districts. These graphics consistently used active voter numbers. Here’s an example from last August. 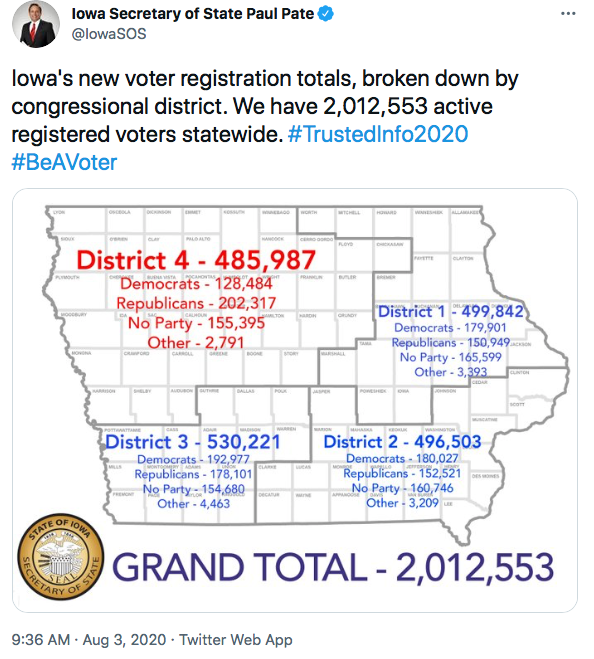 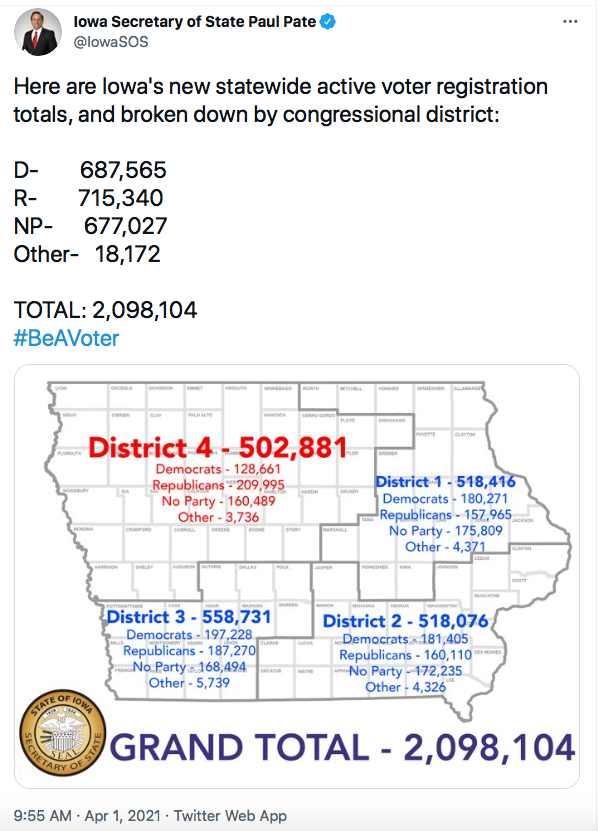 Later that month, the Secretary of State’s office inactivated all Iowa registered voters who didn’t cast a ballot in the 2020 general election and didn’t respond to the “No Activity” mailing. Thousands of them should not have been moved to inactive status, and Pate’s office claimed to fix those errors promptly. Nevertheless, updated figures posted on May 3 showed just 1,821,284 active registered voters statewide, down 276,836 from the corresponding number at the beginning of April.

You wouldn’t guess that from Pate’s tweet announcing new registration figures on May 3. The “grand total” is about 100,000 higher than the previous month’s. 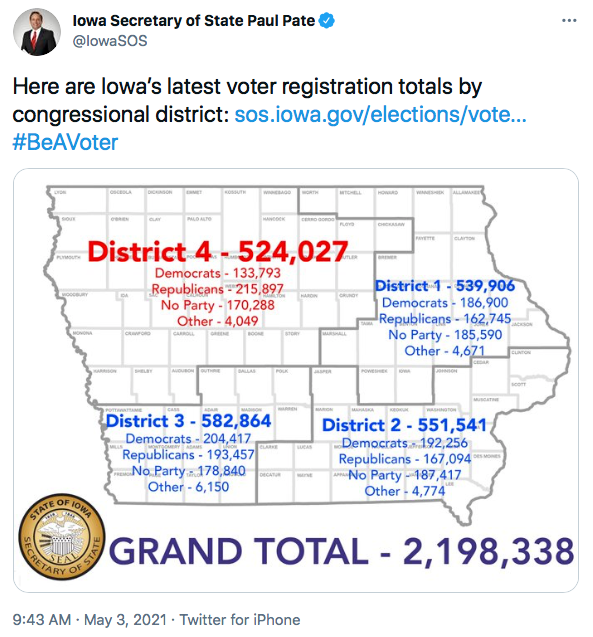 Kevin Hall, communications director for the Secretary of State’s office, did not respond to Bleeding Heartland’s inquiry in May about why Pate was no longer highlighting the active voter registration numbers, and whether that would become standard practice.

It’s now clear that including inactive registrants on the monthly graphics is the new normal. Without announcing that change, the Secretary of State’s office used total registrations, not active voter numbers, to create the maps shared on social media at the beginning of June and July. Here’s the latest graphic, posted on July 1. 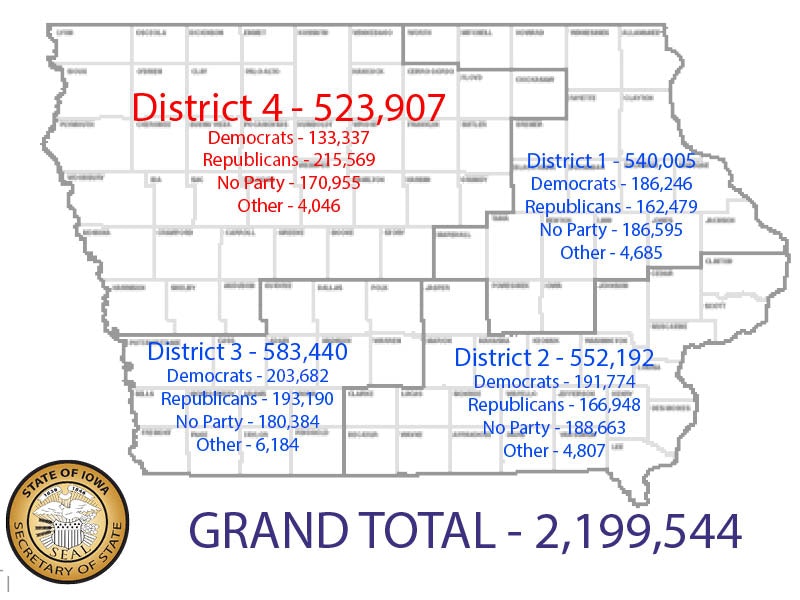 Pate’s staff previously argued against including inactive registrants in voter counts, emails obtained by Judicial Watch through an open records request show. In February 2020, while fielding numerous media inquiries over Judicial Watch’s false claims about potential voter fraud, Hall told reporters that “active voter registration totals are more accurate,” and that counting inactives “greatly skews the numbers.” He added in a message to one persistent reporter, “We would like to remove inactives in a more expedited fashion but we are bound to follow the law.”

Bleeding Heartland sought to confirm whether the Secretary of State’s office asked legislators to allow voters to be moved to inactive status more quickly, and if so, whether that had been a longtime objective for Pate or stemmed from the media firestorm Judicial Watch ginned up in February 2020. Hall did not reply.

Iowans on the inactive list in 2020 had not voted at any time in at least four years, suggesting (in Hall’s words) that they “most likely moved out of state.” Under the law Republicans enacted this year, an Iowan would be moved to inactive status after missing one general election for any reason, even if that voter had participated in city, school board, or primary elections during that same two-year cycle.

Whereas the old law targeted voters who had not cast a ballot over an extended period, the current law will sweep up hundreds of thousands of Iowans who only vote in presidential elections, or who are unable to vote as planned due to an illness, family emergency, or last-minute work trip.

Final note: Some of Iowa’s youngest registered voters were moved to inactive status in April, but that group won’t be affected in the future. Pate’s staff inactivated about 400 Iowans who registered to vote at age 17 but did not cast a ballot in November 2020 because they were not yet of voting age. Under a bill approved on the final day of the 2021 legislative session and signed by the governor last month, voters who were not 18 years old on the date of the general election “shall not be sent” a No Activity notice the following year.