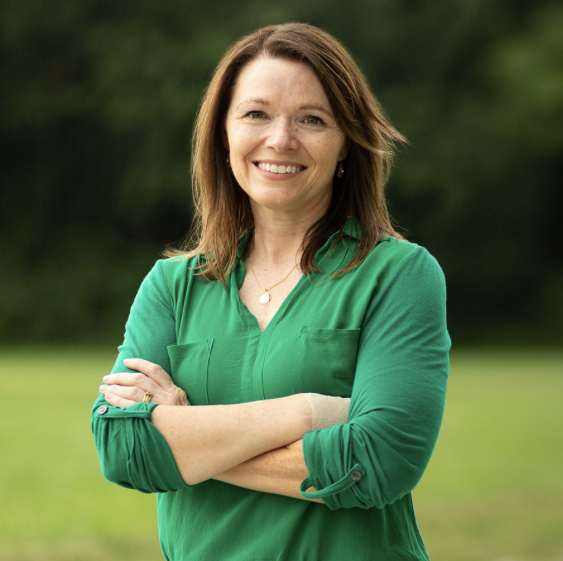 Interview: Christina Bohannan on running for Congress in IA-02

State Representative Christina Bohannan confirmed on August 24 that she's running for Congress in Iowa's second district. She's the first declared Democratic candidate for the seat, where Republican U.S. Representative Miller-Meeks was certified the winner in 2020 by six votes out of nearly 400,000 cast.

Last year's campaign in IA-02 was Iowa's most expensive U.S. House race, with the candidates spending nearly $6 million and outside groups putting in more than $15.5 million over the cycle. Both parties are expected to target the district next year, and Miller-Meeks' campaign had more than $1.1 million cash on hand as of June 30.

Speaking by phone a few hours after her campaign became official, Bohannan told Bleeding Heartland, "I'm having way more fun than I think you're supposed to when you're running for Congress." She said she's enjoyed the conversations she's had today and is feeling "really good" about her early fundraising.

I had more questions for the new candidate.

On not waiting for a new map

Like many who are closely following the redistricting process, I wondered why Bohannan decided to announce now. Why not wait a month or two to see how the second district changes on the next political map?

"It's a great question," Bohannan told me. "I know there's a lot of talk about the maps. But my view is that if you're going to run a campaign, you get in, you go strong, you go bold right from the beginning."

She added that no one knows when a new Congressional map will come out. (The Iowa Supreme Court assumes authority over enacting state legislative maps after September 15, but no state constitutional deadline exists for U.S. House maps.)

Some Republican lawmakers have indicated they hope one will be adopted by January, Bohannan said. "That would be very late" for a successful campaign to get off the ground. "I'm going to put forth the best campaign that I can, and that means working really hard right from the beginning."

On balancing a district-wide campaign with two other jobs

Bohannan's on the University of Iowa law school faculty and was elected to the Iowa House last year after defeating a long-serving incumbent in the Democratic primary. How will she juggle those obligations with running for Congress?

Bohannan worked out an arrangement with the University of Iowa to be on half-time at the law school for the fall semester. She'll be "taking a half salary, and I have a half teaching load and other responsibilities." For the spring semester, she will be on complete leave from the law school: no salary, no benefits.

She will be spending a lot of time on legislative work during the 2022 session, which begins in January and will likely run through April. Otherwise, her efforts will be focused on the Congressional campaign.

On the race to succeed her in the Iowa House

Bohannan's legislative seat (House district 85) covers some of state's most heavily Democratic precincts in Iowa City. I wondered whether she plans to endorse a candidate to succeed her in the state House.

No one has declared for her legislative district, Bohannan said, and she hasn't decided how to approach that race. She's talked with some people who may be interested in serving and wants "a really good person to run for that seat." She anticipates "a lot of new blood" may take a look at the race and hasn't decided whether she will endorse before the June 2022 primary.

On outreach in southeast Iowa

Although we don't know the shape of the next IA-02, it's likely to encompass much of southeast Iowa. How many counties has Bohannan visited so far, and what are her plans for the coming weeks?

Bohannan said she's been speaking with people in just about all of district's current 24 counties, "mostly wanting to hear from them what's happening" in their area and what are the pressing issues for families. Many challenges are common across the district, while others are specific to a certain community. "That's the most exciting part of this for me," getting to know new people.

Reaching out to Republicans and independents will also be important for her campaign. "I think that we're too siloed, too divisive." People would be able to find more common ground if they took the time to talk to each other, in her view.

On lessons learned in the legislature

I wondered how Bohannan's experience from her first year at the state capitol informed her decision to run for Congress and plans for serving at the federal level, if elected.

One of many lessons learned from Iowa House work was "the ability of Democrats and Republicans to work together sometimes" and reach compromises. That said, she's also "stood up for people who I think need a voice" when she disagreed with the majority. (Bohannan spoke on the House floor during some of the most contentious legislative debates, including on a proposed constitutional amendment on abortion, a wide-ranging policing bill that escalated penalties for protests and gave law enforcement officers broad immunity from lawsuits, and a last-minute push to ban local mask mandates.)

Constituent service was "a really fun and rewarding part of the job." While it can "take months or years to get legislation through," helping a constituent fix a problem can happen almost on a daily basis. "Whether it's state benefits or problems they're having with an agency, or just trying to find the right person to talk to about something. [...] Sometimes it's housing or stimulus checks. or I'll connect somebody to deal with a passport, anything."

As a member of Congress, Bohannan said, she'd be committed to providing good constituent service throughout the district, regardless of any person's party association or where they come from.

On her early message to Iowans

At this stage, Bohannan mostly wants people "to know who I am as a person." Her campaign announcement and launch video focused on her life story; I've enclosed both in full below.

Republicans are already trying to peg Bohannan as someone from "the most liberal state house district" who therefore can't "connect with everyday Iowans." But the Democrat grew up in a trailer park with parents who struggled to make ends meet. She also spent much of her childhood living in rural areas. She's confident "my background and experience will resonate with people throughout the district."

Bohannan is currently the only declared Democratic candidate in IA-02. The filing deadline for federal candidates in Iowa is March 18, 2022.

UPDATE: Bohannan's campaign announced on August 25 that donors had contributed more than $100,000 in the first 24 hours. Bleeding Heartland will analyze the new candidate's fundraising when third-quarter disclosures are publicly available in mid-October.

Full text of August 24 news release from Bohannan for Congress:

Bohannan: "There's so much at stake--and our kids, our families, and our small businesses are worth fighting for. We need less bickering in Washington, and more working together--for a government that works for the people."

Today Democrat Christina Bohannan, a mom, law professor, state representative, and former engineer, announced her campaign for Congress. Christina, who grew up in a rural, small town trailer park, knows firsthand the struggles too many Iowa families face. When she was a teenager, her dad got sick and his insurance was cancelled, forcing her family to choose between paying for his medicine and paying for everything else. In Congress, Christina will fight every day for Iowa families, kids, and small businesses because she believes if you work hard, you deserve a fair shot to get ahead. 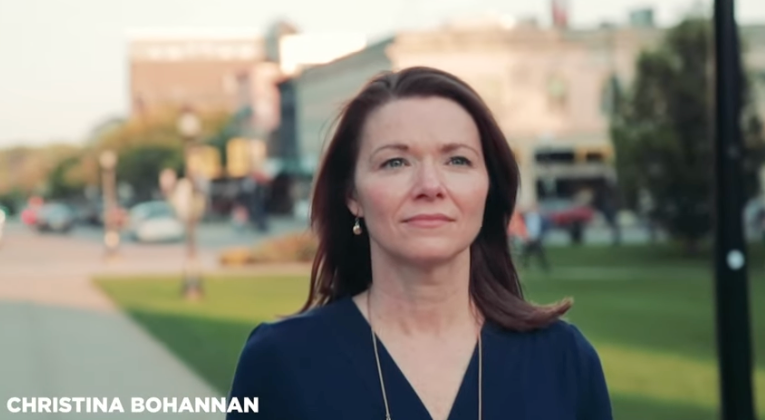 Christina Bohannan is a mom, law professor, state representative, and former engineer. She is running for Congress because she believes we need less bickering in Washington, and more working together — for a government that works for the people. Christina will fight every day for Iowa families, kids, and small businesses because she believes if you work hard, you deserve a fair shot to get ahead.

The youngest of her parents’ three children, Christina grew up living in a trailer in a rural small town. Her parents never finished high school, and her mom worked at a daycare while her dad struggled to make ends meet as a construction worker.

When Christina was in high school, her dad got sick with emphysema, and his health insurance was cancelled, forcing her family to choose between paying for his medicine and paying for everything else.

Thanks to the support and guidance of strong public school teachers, student loans, scholarships, and Christina’s hard work, she became the first in her family to graduate college. She worked her way through engineering school and then law school by picking oranges, cleaning trailers, and working as an engineer. Christina graduated first in her law school class and was Editor-in-Chief of the law review, and after graduation went on to clerk for the United States Court of Appeals for the Eleventh Circuit.

More than two decades ago, Christina was given a life changing opportunity to move to Iowa and become a law professor at the University of Iowa. She is proud to have raised her daughter here on the Iowa values of decency, fairness, and hard work. Christina’s daughter recently graduated from City High and is in her second year of college. In their community, Christina and her family have been involved in several organizations, including groups that advocate for women and girls, support hard-working and low-income families, and serve underprivileged areas.

At the University of Iowa law school, Christina teaches and writes in several areas of law, including teaching Constitutional Law, Torts, and Intellectual Property. She’s spent her career working on business innovation, capitalism, and economic growth, and teaching our young people about the importance of democracy in a country founded on the promise of freedom and equality.

In 2020, Christina stood up to run for office, taking on politics as usual and defeating a 20-year incumbent to now represent District 85 in the Iowa House. During her time in the Statehouse, Christina has listened to her community to protect working families, look out for seniors, push for more investment in our public schools, and help Iowa families and small businesses recover from the unprecedented challenges of COVID-19. She’s worked with both parties to pass legislation to crack down on human trafficking and to address the often overlooked problem of elder abuse.

Now, Christina is running for Congress because she believes we need a government that works for the people, not Washington special interests.  Too many Iowa families are struggling, worrying they’re just one bad break from not making ends meet, like her family was when her dad got sick. In Congress, Christina will work for more technical and vocational training for high-skill, high-wage jobs right here in Iowa, greater investment in our kids and schools, real steps to make Iowa a clean energy leader, strong protections for voting rights, and better access to quality, affordable health care and broadband all across Iowa.

Outside of serving her community in the Statehouse and teaching at the University of Iowa, Christina enjoys running, hiking, and bike riding, and spending time with her daughter, fiancé, and enthusiastic little spaniel named Ginger.