Candidates for federal offices are raising more money than ever, and that trend was noticeable in the second-quarter Federal Election Commission filings for Iowa's four U.S. House incumbents. Most of them reported fundraising numbers that would have attracted national attention just a few cycles ago. Many large donors live outside Iowa, a sign that national committees are driving contributions to candidates perceived to be in competitive districts.

With that caveat, let's review where things stand for the three Republicans and one Democrat who represent Iowa in the lower chamber of Congress.

First-term Representative Ashley Hinson (IA-01) landed seats on the coveted House Appropriations Committee as well as the Budget Committee. That was a message to Republican donors: protecting this rising star is a high priority. They got the memo.

Hinson's campaign has also used aggressive fundraising tactics like pre-checking recurring donation boxes on online forms (a technique the FEC has asked Congress to ban). Here's an image from an appeal texted this week: 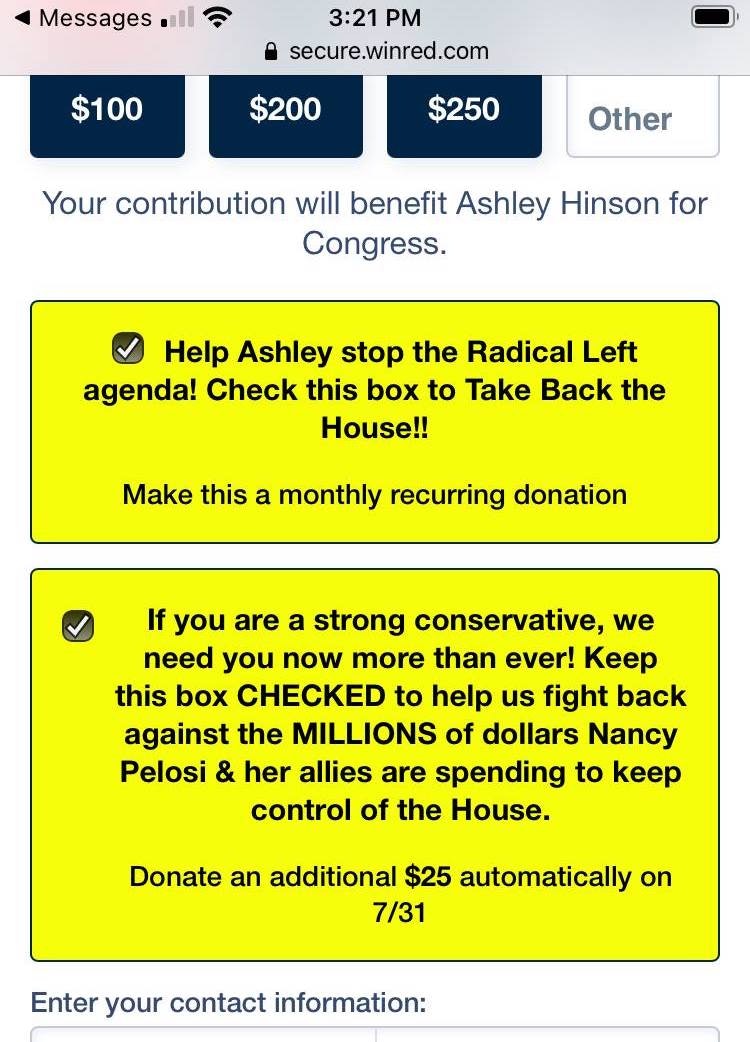 The incumbent's fundraising increased during the second quarter: $776,892.69 in total contributions, of which $613,867.13 came from individual donors. Even Senator Chuck Grassley hasn't raised that much from individuals this year. By my count, 27 of Hinson's donors, including some "usual suspects" like David Barker and Pete Brownell, have maxed out for the 2022 cycle with contributions totaling $5,800. The rest could give again. (One of Hinson's regular donors, Lynne Archer of Texas, continued to make frequent small contributions after maxing out, resulting in many campaign refunds of $25 or $50.)

From April through June, Hinson's campaign also brought in $163,025.56 from a long list of Republican or corporate political action committees, and $96,779.36 in transfers from other political committees.

No Democrat has confirmed plans to run in IA-01, but State Senator Liz Mathis is thinking seriously about it and may announce her decision soon.

Representative Mariannette Miller-Meeks didn't improve on her first-quarter fundraising totals, but still had a solid quarter for an off-year. Total receipts from April through June were $494,882.12, down about $55,000 compared to the first quarter. The intake included $250,860.43 in contributions from individuals (down nearly $90,000 compared to the first quarter), $127,600 from conservative or corporate PACs (nearly double the number from the first quarter), and $114,847.69 in transfers from other committees (up by around $42,000).

Ten donors have maxed out to the campaign, including several who also gave $5,800 to Hinson (such as Frank Brownell and Pete Brownell). The rest of Miller-Meeks' individual contributors could give again.

The incumbent is running a relatively lean operation. Her campaign reported $95,313.53 in total disbursements during the second quarter, way down from the 1Q total that included legal costs associated with the disputed election result in IA-02. Operating expenses totaled $42,735.67, with fundraising consulting, direct mail, and compliance consulting accounting for the largest line items. Miller-Meeks also gave $32,761.00 to the National Republican Congressional Committee, which spent more than $3.8 million on the 2020 race in IA-02. (Hinson's campaign gave the NRCC $55,000 earlier in the year but nothing during the second quarter.)

To my knowledge, no Democrat has confirmed plans to run in IA-02. Presumably the prospective candidates are waiting to see how Iowa's new political map pans out.

Representative Cindy Axne, the lone Democrat in Iowa's Congressional election, hasn't let up on fundraising while she considers whether to run for a third term in 2022 or for another office (most likely governor).

Axne's fundraising picked up in the second quarter. Her latest FEC filing shows $701,808.35 in contributions, about 85 percent ($598,407.35) from individuals and $103,401 from PACs. Looking through both quarterly filings, I counted 45 people who have contributed the maximum $5,800 to the campaign for the 2022 cycle. All the other individual donors could give again.

Only one Republican candidate in IA-03 has filed an FEC quarterly report. Mary Ann Hanusa raised $37,793.85, all from individuals. After spending $8,134.68, her campaign had $29,659.17 cash on hand as of June 30. That won't go far toward raising the Council Bluffs native's name ID in the central Iowa counties where most district voters live.

The other two Republicans who have declared in IA-03 (Zach Nunn and Nicole Hasso) won't disclose their fundraising and spending until after the third quarter. I expect Nunn to report big numbers, given his GOP establishment support.

During the last election cycle, Randy Feenstra's early fundraising was underwhelming, considering how many high-powered Iowa Republicans were backing his challenge to Steve King. He has picked up the pace a bit as an incumbent. Feenstra's campaign reported $290,734.89 in contributions during the first quarter: $201,834.89 from individuals and $88,900 from various GOP or corporate PACs. He also transferred $72,778.64 from the Feenstra Victory Fund committee.

At least 24 people have maxed out to Feenstra, including well-known Iowa Republicans like Bruce Rastetter, Pete and Frank Brownell, John Smith and his wife Dyan Smith, and Joe Crookham.

Feenstra's campaign spent only $29,076.44 in the first quarter (on routine operating expenses) but bumped up the spending to $166,967.95 in the second quarter. The biggest line items were for fundraising consulting, digital ads, polling, and video production. He also transferred $10,000 to the NRCC. As of June 30, his campaign had $484,268.04 cash on hand and $21,491.51 in unpaid bills to the Victory Enterprises consulting firm.

Although Feenstra has less money in the bank than Iowa's other members of Congress, IA-04 should remain in a safe Republican seat in any redistricting scenario.

I'm not aware of any declared Democratic challengers here.

Final observations: I did not find any record of Feenstra raising money in the second quarter from disgraced Republican donor Steve Wynn. The Hinson and Miller-Meeks campaigns each accepted $5,800 from Wynn earlier in the year.

Also worth noting: the Richard Spencer who has given $5,800 this year to Miller-Meeks and $5,000 each to Hinson and Feenstra is not the neo-Nazi. This Richard Spencer is a real estate developer in Fresno.