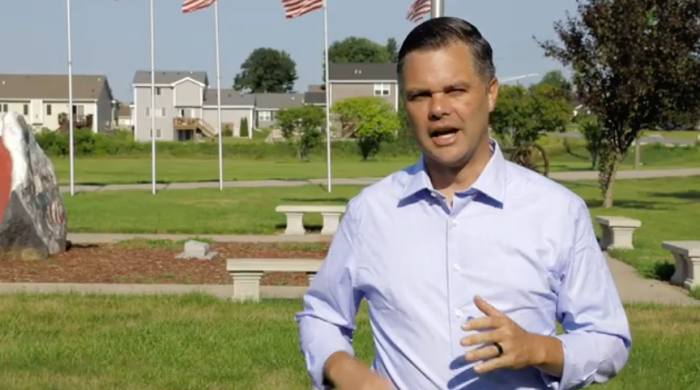 State Senator Zach Nunn launched his Congressional campaign on July 13 with a promise to "bring Iowa’s record of success to the nation’s capital" and "defeat the far-left’s socialist agenda.”

Although Republicans Mary Ann Hanusa and Nicole Hasso are already running in Iowa's third district, Nunn entered the race as the clear front-runner for the GOP nomination.

A combat veteran in the U.S. Air Force and former federal government staffer, Nunn served two terms in the Iowa House before winning an open Iowa Senate seat (against a deeply flawed Democratic candidate) in 2018.

More Republicans may enter the field in IA-03 before the filing deadline next March, but Nunn will be very hard to beat in the GOP primary, for three reasons:

Nunn thought seriously about running for Congress during the last election cycle and even held a "listening tour" around IA-03 shortly after the state legislature adjourned in 2019. He backed off after Republican establishment figures including Senator Chuck Grassley and former Governor Terry Branstad got behind David Young early.

Many of my contacts in both parties thought Nunn would have run a stronger race against U.S. Representative Cindy Axne, who won re-election by a 48.9 percent to 47.5 percent margin, similar to her 49.3 percent to 47.1 percent victory over Young in 2018.

Former Polk County GOP chair Will Rogers is already backing Nunn and is quoted in the candidate's campaign announcement, enclosed in full at the end of this post. I expect more well-known Republicans to endorse soon. Iowa Senate President Jake Chapman recently confirmed he won't run for Congress in 2022, so he won't be competing with Nunn for legislative support.

Like Nunn, Hanusa worked on Grassley's staff early in her career. She later held a position in George W. Bush's White House before running unsuccessfully for Iowa secretary of state in 2006. Nevertheless, she hasn't landed any big endorsements since announcing her Congressional campaign in April.

July is a popular time for Congressional candidates to launch because it's near the beginning of a fundraising quarter. Nunn will likely report big numbers on his first quarterly Federal Election Commission filing in October.

A solid base in Polk County

Iowa won't have a new Congressional map for another couple of months, but we know one thing for sure: Polk County will be the anchor of IA-03. The ideal population for a U.S. House district in Iowa will be 797,592. Polk County had an estimated 490,000 residents as of July 2019 and will have a higher number in the official 2020 census count.

Polk County is also home to about 46 percent of active registered Republican voters in the current IA-03. Any candidate who can dominate the Des Moines metro area will be heavily favored in the 2022 primary, regardless of the new shape of the Congressional district.

Hasso also lives in Polk County but is a first-time candidate and hasn't laid the groundwork Nunn has for this kind of race.

No red flags for the GOP base

Nunn was a classic example of a rising star: named to the Iowa House Republican leadership team during his first term and to the fourth ranking position in the caucus in his second term. He was put in charge of the House Judiciary Committee during his final year in that chamber.

I can't think of any issue on which Nunn has strayed from the conservative Republican position, or any bill or amendment where he voted against the majority of the GOP caucus. (Please let me know if you are aware of any examples.)

In contrast, former State Representative Hanusa was never part of the leadership team during her five terms in the state House and never chaired a powerful committee. She voted against at least two high-profile Republican bills: the 2017 legislation that shredded collective bargaining rights and the “water quality” bill passed in 2018. The first vote would anger business-friendly conservative lobby groups and and the second would anger Big Ag.