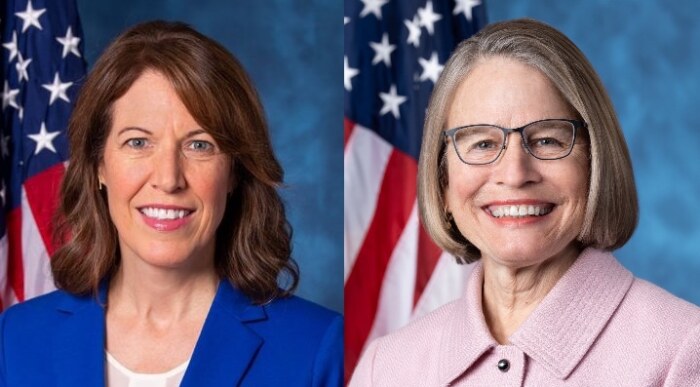 Ethics complaint a hard lesson for Axne, warning for Miller-Meeks

The non-profit watchdog group Campaign Legal Center filed ethics complaints on September 22 against seven members of Congress, including U.S. Representative Cindy Axne (IA-03). The complaints ask the Office of Congressional Ethics to investigate four U.S. House Democrats and three Republicans, who did not disclose stock trades within the time frame required by the Stop Trading on Congressional Knowledge (STOCK) Act. That 2012 law was designed to prevent members of Congress from turning inside knowledge into profit.

For Axne, it was the worst way to find out about a disclosure problem. The ethics complaint generated extensive Iowa media coverage, all of which included quotes from delighted Republicans. For U.S. Representative Mariannette Miller-Meeks (IA-02), the episode was a heads up to get her own financial disclosures in order before she faces similar scrutiny next year.

The STOCK Act requires members of Congress to file “periodic transaction reports” within 45 days of any purchase or sale valued at more than $1,000. The Campaign Legal Center’s staff compared annual financial disclosures for all House members who have served more than one term, looking for clues about transactions that were not disclosed in a timely manner, or at all.

The group’s full complaint against Axne is enclosed at the end of this post. Staff identified 28 assets from her annual disclosure for 2019 “that do not reappear on her 2020 disclosure,” suggesting those stocks were sold. Another fifteen assets reported on the 2020 disclosure were not listed on the previous year’s, suggesting Axne “purchased those assets but failed to report the transactions as required.” The total value of the assets in question is somewhere between $43,043 and $645,000.

Axne did not file any periodic transaction reports in 2019 or 2020. While some purchases involving her accounts may not have triggered STOCK Act reporting requirements, if they were valued below $1,000, that’s unlikely to have been the case for all of the undisclosed transactions.

The group asked the Office of Congressional Ethics to conduct a “preliminary review to determine whether Rep. Axne’s nondisclosure was an intentional violation of the STOCK Act and House rules,” and “an attempt to avoid scrutiny of trades connected with non-public information or with potential conflicts of interest.”

The complaint argued that failing to file the disclosures “is unlikely to be merely an oversight,” because Axne was “required to attend mandatory ethics training” in 2019 and 2020. In addition, the complaint says Axne “should have known about the disclosure requirements,” because “High profile insider trading allegations engulfed several senators in March 2020 and became widely publicized.”

In a news release, the Campaign Legal Center said, “This ongoing trend of STOCK Act violations shows that merely the threat of a nominal fine is not deterring members of Congress from breaking the law.” Kedric Payne, the group’s general counsel and senior director of ethics, said a lack of accountability “is basically giving elected officials the green light to buy and sell stocks based on information gained from committee meetings without any transparency for their voters.” He added, “Until we see meaningful enforcement paired with real transparency, I see no end to this troubling trend.”

“SHE DOES NOT PERSONALLY MANAGE OR EXECUTE TRANSACTIONS”

After news broke about the ethics complaint, a spokesperson for Axne said in a written statement,

While Congresswoman Axne completes her own financial disclosures, she does not personally manage or execute transactions related to her retirement account or the ones she has with her husband or her small business.

In accordance with her legal requirements, Cindy Axne has submitted disclosures of her assets through her first three years in Congress. If there are errors with those disclosures, they are unintentional and the Congresswoman will take immediate and all necessary steps to ensure her disclosures are accurate and in accordance with the law.

Axne’s staff declined to answer follow-up questions on the record. The statement implies Axne did not realize the law requires her to disclose all stock transactions from her accounts, even if not directed by her.

The training videos provided by the House Ethics Committee to all members are not publicly available. It would be useful to know whether that training, which covers annual financial disclosures as well as the STOCK Act requirements, clarifies that all sales or purchases must be reported within 45 days, regardless of who directed the transaction.

To determine whether Axne knowingly violated the law, the Office of Congressional Ethics will need to find out who initiated stock sales or purchases from her accounts, as well as how she understood the reporting requirements. Comparing the timing of the transactions with the House Finance Committee’s hearing schedule will also be important to discern whether inside information played into any investment decisions.

“She’s been caught red-handed. She broke federal law,” he said. “Her excuse is weak. This is purposeful. Look, she sits on the Financial Services Committee. You do not conduct 40 transactions with total amounts possibly up to well over half a million and have that not be purposeful.”

Kaufmann can’t know whether Axne’s actions were “purposeful.” He doesn’t know whether she was even aware of the stock trades at the time, let alone “conducting” them. Many people don’t pay close attention to how their funds are being managed. Nevertheless, he and Iowa GOP communications staffer Kollin Crompton have continued to claim Axne “knowingly broke federal law.”

We’ll know more when the Office of Congressional Ethics reports their findings. But regardless of what that investigation uncovers, Kaufmann’s talking points will surely appear in many 2022 campaign ads against Axne. The campaign arm of U.S. House Republicans is already trying to brand Axne as “corrupt.”

One other Iowan in Congress appears to have violated federal disclosure laws. Fortunately for her, she has a chance to correct the errors before they prompt a formal ethics complaint from a watchdog group.

Miller-Meeks, a Republican representing Iowa’s 2nd District, filed the least information on her financial disclosure form. Her report says “none disclosed” for assets and “unearned” income, liabilities, positions or agreements.

For her earned income for 2020, Miller-Meeks reported $100,000 for her salary as a U.S. representative, although she didn’t start that job until January 2021. It’s possible she intended that amount to represent the share of her $174,000 congressional salary she’d been paid through Aug. 13, when the report was filed.

Will Kiley, a spokesman for Miller-Meeks, said Wednesday his boss now is working with the House to update her form to add her Iowa Senate salary. He said Miller-Meeks does not have any outside income, including from IRAs or 401(k)s, that she would be required to report on the form.

Kiley did not respond to my emails seeking to clarify whether Miller-Meeks really has no assets, outside income, or retirement accounts. It would be unusual for a doctor with several decades of experience not to have any savings or investment accounts.

I turned to Campaign Legal Center staff to help me understand what federal law requires. If Miller-Meeks co-owns a home, would that need to be listed as an asset or liability? If her name is on a bank checking or savings account, would the balance (within some range) need to be listed as an asset on her annual disclosure? If she has any investment or retirement accounts, would those need to be reported as assets, even if she drew no income from them during 2020?

Delaney Marsco, the center’s senior legal counsel for ethics, responded via email on September 24. She noted that the group didn’t review Miller-Meeks’ annual disclosure in detail, or those of any first-term House member. For this project, they scrutinized annual reports only from members who filed them for two or more years.

Speaking generally about the law, Marsco told me, “For personal residences, members must disclose any mortgages or home equity loans in schedule D, ‘liabilities,’ in their financial disclosure report. A personal residence does not need to be disclosed as an asset in schedule A, unless it generates rental income (i.e., from the rental of a basement “unit” or room in the house). A second home that is held for investment purposes/generates rental income during the reporting period must be disclosed.”

Regarding other assets, Marsco explained,

Banking and checking accounts held by the member, the member’s spouse, or member’s dependent child must be reported as assets in schedule A if their value exceeded the reporting threshold ($1,000) during the relevant reporting period.

Investment and retirement accounts (like IRAs and 401(k)s) must be reported as assets in schedule A, including all underlying assets in those accounts.

Miller-Meeks did not disclose any assets or liabilities. That may not be a problem with respect to her residence, if she and her husband own one home free and clear (that is, with no outstanding mortgage or equity loans), and the home does not generate any rental income.

It seems extremely improbable that Miller-Meeks has no reportable banking or investment accounts, though. She loaned her Congressional campaign $195,000 during 2020. Federal Election Commission filings have listed that loan as coming from “personal funds.”

Unlike Kaufmann and Crompton, I operate in good faith. So I’m not asserting that Miller-Meeks knowingly broke federal law. Based on what Kiley told the Cedar Rapids Gazette, Miller-Meeks and her staff appear to have the mistaken impression that investment accounts need to be disclosed only if the member received income from them during the reporting year. They should know better, if they completed the ethics training required for members of Congress and staff. But people can make honest mistakes.

In response to one of my recent tweets, Crompton asserted that Miller-Meeks, “never failed to disclose a transaction. Axne is illegally hiding stock trades. You know better.”

What I do know is that Miller-Meeks has not filed any periodic transaction reports so far this year and didn’t disclose any accounts or stock holdings whatsoever. If she owns any stock at all, she has failed to disclose assets. And if there has been any activity in any of her investment or retirement accounts, she may have also neglected to disclose stock trades. We’ll know if and when she files more complete annual financial reports for 2020 and 2021.

Miller-Meeks is lucky to have time to fix her disclosure problems before the Campaign Legal Center looks closely at the next round of annual reports.

P.S.— U.S. Representative Ashley Hinson (IA-01) told the Dubuque Telegraph-Herald in April that she and her husband “would sell all their publicly traded stocks,” and going forward would “only will invest in widely held mutual funds and exchange-traded funds for their retirement savings.” Hinson filed a periodic transaction report detailing a number of stock sales in March. So as far as I can tell, she has kept her promise and complied with STOCK Act requirements.

Representative Randy Feenstra (IA-04) disclosed banking, pension, and 401(k) accounts on his annual disclosure. He has not filed any periodic transaction reports this year, but that may not be a problem if there has been no recent activity in any of his investment or retirement accounts.

Appendix: Complaint filed against Cindy Axne with the Office of Congressional Ethics