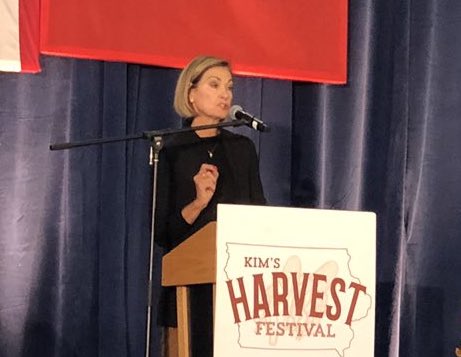 The state of Iowa ended fiscal year 2021 with the largest surplus ever recorded: nearly $1.24 billion. That’s four times higher than the general fund’s ending balance of $305 million when the books closed on the previous fiscal year, and it doesn’t include an estimated $801 million in Iowa’s cash reserves and economic emergency funds.

Governor Kim Reynolds declared in a news release, “Iowa is in a very strong financial position due to our fiscal responsibility.” Her staffer Joel Anderson, who is temporarily running the state’s budget agency, commended the governor “on recognizing the importance and need for a healthy and strong balanced budget.”

But an enormous surplus is not a sign of a healthy budget or responsible decisions. On the contrary, it suggests state government should have spent more on the public services Iowans need.

During the fiscal year which ran from July 1, 2020 to June 30, 2021, Reynolds and legislative leaders could have allocated additional state funding to help individuals or businesses struggling during the worst pandemic in a century. They could have devoted millions of dollars to helping Iowans repair their homes following the most destructive derecho in recent memory. They could have passed supplemental appropriations bills to bump up state spending on education or crucial services like child care or children’s mental health. They could have funded new soil conservation programs or cleaned up dirty waterways.

They chose not to do any of the above. However, GOP lawmakers and the governor did approve an extra $44.23 million to spend during fiscal year 2021 on paying off the state’s contract for the Workday computer system.

Virginia’s Democratic governor has called for using some of that state’s record-setting surplus to invest in “utility support, rent relief and public health service.”

Republicans operate from a different playbook: cut services when the budget is strained, cut taxes when revenues exceed costs. Reynolds tweeted from her political account on September 27, “This is your money, not the government’s and I won’t forget that. Republicans in the legislature won’t forget that either, which is why we will work together to continue to CUT taxes in the state of Iowa.” She delivered the same message during a September 25 campaign fundraiser.

But the “main purpose of state government isn’t to amass a record surplus,” observed Randy Bauer, who served as Governor Tom Vilsack’s budget director for six and a half years. “How is Iowa doing relative to other states in employment growth? Personal income growth? Health outcomes? Aren’t those more important? Hint: Iowa’s not doing so well on those.”

It is important to give credit where credit is due. As mentioned by Iowa’s non-partisan budget experts at their last meeting, the state budget would not be in the strong position it is in today without the unprecedented COVID relief and recovery measures taken by President Biden and Democrats.

This spring, Reynolds repeatedly bashed the latest federal COVID-19 relief package (called the American Rescue Plan) as a “blue-state bailout.” But she has taken credit for initiatives to improve housing and broadband that rely on American Rescue Plan funds. The Des Moines Register’s Stephen Gruber-Miller reported,

“There are a lot of areas where the governor has funded normal operating expenses by using federal dollars,” Hall said in a follow-up interview. “And at the same time, some of the global expenses have actually been less of a cost to the state because of COVID than they would be normally. And so that kind of gives the appearance of an inflated ending balance.”

Joel Anderson, the state’s interim budget director, who was appointed to the job by Reynolds, said the surplus was the result of Iowa bringing in more money than projected from sales tax and corporate and individual income taxes.

“It wasn’t necessarily that it was from us using COVID relief funds on certain things,” he said. “This was Iowans and taxpayers (who) generated more tax receipts.”

No doubt both factors played into the surplus. Reynolds did use large amounts of federal COVID-19 relief funds to cover routine expenses, like $10 million for salaries of state troopers whose duties were largely unchanged during the pandemic.

The surplus is sure to be a major theme of Reynolds’ re-election campaign. Pat Garrett, who recently left the governor’s office to work on the 2022 campaign, depicted the state’s ending balance as evidence of Reynolds’ “incredible leadership.”

State Auditor Rob Sand, a possible Democratic candidate for governor, has repeatedly called for more state spending on pandemic relief, tapping reserve accounts if necessary. During one news conference last December, he put it this way: “On our rainiest day, let’s not hoard the umbrellas.” Brianne Pfannenstiel reported at the time,

Sand said state leaders have an obligation to reduce suffering amid rising food insecurity, housing insecurity, business losses, and mental health needs exacerbated by the pandemic. He said tax cuts would not provide immediate relief to those who need it most.

“We need to get the money out faster than that,” he said. “And it needs to be targeted, as opposed to a broad-based approach where we’re just putting more money in the hands of people for whom the pandemic has been an inconvenience, but not a life threatening experience.”

Sand tweeted from his personal account on September 28, “During a time of crisis that killed 750 restaurants alone, our Gov is the 3rd servant in the Parable of the Talents… & thinks it is good for her politics.”

During a time of crisis that killed 750 restaurants alone, our Gov is the 3rd servant in the Parable of the Talents… & thinks it is good for her politics. https://t.co/g11VIfpAle pic.twitter.com/yK4jadUlZB

In that parable from the Gospel of Matthew, two servants wisely invest their master’s property and increase its value, while the third servant hides the property in a hole in the ground, not putting it to good use.

Gov. Kim Reynolds announced today that the State of Iowa will end Fiscal Year 2021 with a balance of $1.238 billion in its General Fund.

“Iowa is in a very strong financial position due to our fiscal responsibility,” said Gov. Reynolds. “This surplus proves we accomplished exactly what we set out to do—overcome the financial challenges caused by the global pandemic and invest in education, workforce, healthcare, agriculture and technology. We will continue to invest in these important priorities going forward to meet the needs of our citizens and state.”

“I commend the dedication of Governor Reynolds on recognizing the importance and need for a healthy and strong balanced budget for the state of Iowa,” said Joel Anderson, interim director of the Iowa Department of Management.

FY 2021 closed on June 30th, but the accrual period officially ends on September 30th. During this time, Iowa closes the books and pays out and receives outstanding obligations. Last year’s budget surplus was $305 million dollars.