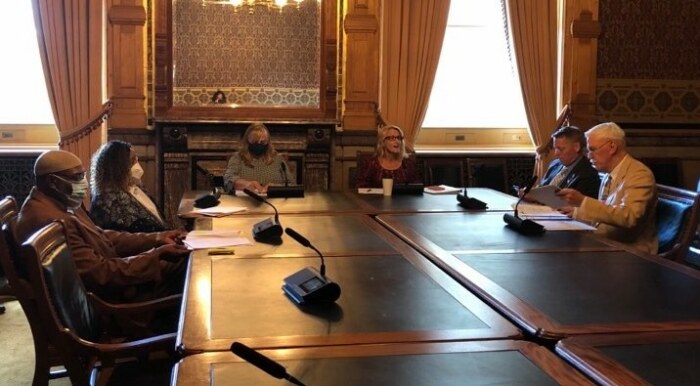 Democratic State Representative Todd Prichard filed the complaints in May after a leaked video showed Heritage Action's executive director Jessica Anderson boasting that the group had worked "quickly" and "quietly" with Iowa lawmakers to help draft and pass a new election bill. In the complaints, Prichard asserted that Anderson and Hans von Spakovsky, manager of the Heritage Foundation’s Election Reform Initiative, violated the Iowa legislature's lobbying rules by not registering as lobbyists.

Unlike most Iowa legislative committees, the House and Senate ethics panels have an equal number of Democrats and Republicans. While discussing the complaints, committee chair Anne Osmundson and fellow Republicans Stan Gustafson and John Wills repeatedly said there was no specific evidence Heritage Action had engaged in undisclosed lobbying. Alluding to Anderson's remarks to donors, Gustafson said "somebody can brag about something. Whether it happened or not is a different story."

The GOP lawmakers cited letters from an attorney for Heritage Action, who denied the group had lobbied the legislature. They also pointed out that members of the public do not need to register as lobbyists when urging their representatives to support or oppose legislation.

By way of example, Wills mentioned the Iowa Environmental Council, which has mobilized many grassroots supporters to contact legislators about proposed water quality legislation. Those citizens don't need to register as lobbyists. (Wills did not acknowledge that the Iowa Environmental Council's paid staff members, who are involved in such organizing efforts, do register as lobbyists. The question is whether Heritage Action's paid staff spent time engaging Iowa-based activists.)

State Representative Monica Kurth, the ranking Democrat on the Ethics Committee, argued that Heritage Action should be "admonished" for its actions. She read several passages from Anderson's remarks to Heritage donors, which indicated that the group had successfully advocated for specific provisions to be included in the election law.

Kurth also observed that a letter from Heritage Action's attorney referred to "sentinels" who pushed for the legislation in Iowa, but did not define the term or clarify whether those sentinels were paid. If they were, they should have registered as lobbyists.

Democratic Representatives Ruth Ann Gaines and Ako Abdul-Samad raised similar points during the panel's discussion and voted with Kurth against the Republican motions to dismiss each complaint.

The 3-3 votes mean the committee has taken no action. A legislative staffer explained following the meeting that Prichard's complaints technically remain before the committee, but there is no obligation for members to take them up in the future.

Before members adjourned, Kurth asked for the committee to send a letter to Heritage Action explaining Iowa's lobbying rules. Osmundson said they need to check with staff on that, and the committee may discuss the matter at its next meeting.

The Iowa Ethics and Campaign Disclosure Board, which enforces state rules on lobbying the executive branch, determined this summer that Heritage Action did not lobby Governor Kim Reynolds on the election bill.