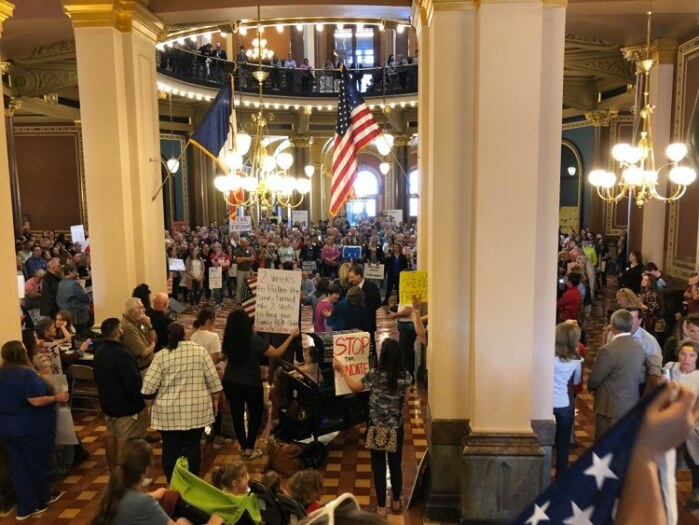 Let's not change the definition of local control

Bruce Lear: Instead of allowing elected school boards to make decisions for a school district, Iowa's governor now defines local control as parents deciding what’s best for their own children.

I’ve said it before, but it’s worth repeating, especially since Governor Kim Reynolds has altered the definition of local control to justify signing a mask mandate ban for schools. There’s a reason “Community” is the middle name for almost every public school district in Iowa.

Public schools are often a town's largest employer as well as the community center. On Friday nights, the school's fields or gyms can be the center of the universe for young athletes and their parents.

In fact, the relationship is symbiotic. The community helps the school thrive, and the school helps a community survive.

Too bad Reynolds distrusts Iowa communities so much she won’t allow local control over safety decisions fitting the community. Instead she is appealing a federal court decision that put the mask mandate ban on hold.

Here’s the long-accepted definition, and the one her political party supported for many years.

In education local control refers to the governing management of public schools by elected or appointed representatives serving on governing bodies such as school boards or school committees, that are located in the communities served by the schools.

Instead of allowing elected school boards to make decisions for a school district, Reynolds now defines local control as parents deciding what’s best for their own children.

Now, cowed by the governor, some local school boards, including in Sioux City, are allowing a minority of loud parents to make a community safety decision. In addition, there have been some really ugly and scary school board meetings, where angry parents drowned out common sense.

It’s time for boards like Sioux City's to stand-up and vote for a mask mandate. Requiring masks on buses is a good step, but it’s a band aide approach for a tourniquet problem.

It also ignores common sense to allow school districts to get by with being opaque about the number of COVID-19 cases, and then claim there is no need for a mask mandate because of low percentage of spread. If the community infection rate is at 15 percent and the school is reporting far less than that rate, my guess is someone is spinning numbers.

It is not about individual parents choosing. It’s about community safety. School board members need to do what’s best for the health of children based on sound medical science, rather than bowing to loud protests.

On the surface, letting parents decide might sound reasonable, but during a public health crisis, it doesn’t pass the smell test. Reynolds' approach and the lack of action by the Sioux City school board disregards the risk to the community when individual parents make an uninformed decision based on misinformation or a particular political ideology.

Parents are partners in education. But they are not customers who are always right. For example, if parents make the choice to send their children to school without shoes, no one believes that’s local control. We’d all know it’s child neglect. The school and the community would immediately intervene, because there’s an interest in protecting all children.

Currently, more than 20 percent of all new COVID-19 cases in Iowa are children. Many medical experts worry the virus will continue to mutate among the unvaccinated until there is a variant that can e vaccine.

After vaccines, masks are the best, proven tool to fight the virus. Requiring masks is not a plot by the government to steal freedom, it’s a chance for the whole community to have freedom from this virus. No one loves masks. No one loves seat belts. We use both to protect ourselves and our community.

There’s an old saying, “You can put lipstick on a pig, but it’s still a pig.” Reynolds can call individual parent decisions "local control," but that doesn’t make it local control. School boards need to step up listen to the whole community, and do the right thing to protect our kids.

Bruce Lear lives in Sioux City and retired after 38 years of being connected to public schools. He was a teacher for eleven years, and a Regional Director for Iowa State Education Association for 27 years until retirement.

Top photo by Laura Belin taken during the October 5 rally at the state capitol by Informed Choice Iowa, a group opposing COVID-19 vaccines, masks, and other mitigation practices.