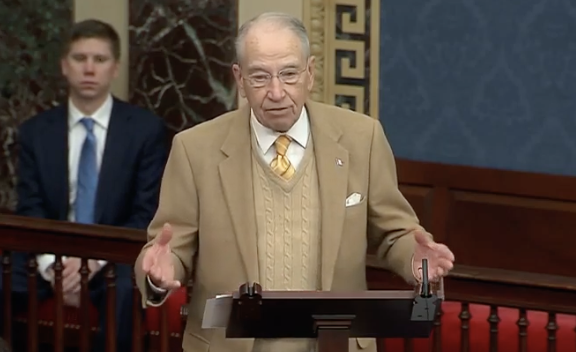 U.S. Senator Chuck Grassley on December 2 blocked Senate debate on a bill that would require background checks on all firearms sales. Democratic Senator Chris Murphy of Connecticut requested unanimous consent to proceed with debating the bill, known as the Bipartisan Background Checks Act of 2021, following the latest horrific mass shooting at a school, which ended the lives of four Michigan high school students.

The bipartisan background check bill is one of two gun safety measures the House approved in March, with support of Democratic Representative Cindy Axne (IA-03). Eight House Republicans voted for this legislation, but most of the GOP caucus (including all three members from Iowa) opposed its passage.

Murphy noted on the Senate floor, “there’s almost nothing in the political world that enjoys such high support as universal background checks. 80 percent, 90 percent of Americans, the majority of Republicans, Democrats, gun owners, non gun owners support universal background checks. But we can’t get it done because it seems as if many of my colleagues here care more about the health of the gun industry and their profits than they do about the health of our kids.”

Grassley framed his position differently, of course. Here’s the full video of his remarks.

Grassley began by citing procedural concerns. Democrats control all the Senate committees, so why not bring up this bill under regular order?

He acknowledged Murphy feels strongly about the issue “because of the tragedy that happened in his state in 2012” (the Sandy Hook elementary school massacre in Newtown). “Nobody’s going to justify that,” Grassley said. He also expressed regret for the “shocking act of violence” at the Michigan high school this week.

Then he moved into lecture mode. “Difficult topics require across-the-aisle conversations, particularly when you have to have 60 votes to get anything done in this body.” Grassley touted a bill he co-sponsored in 2013 “to improve the National Instant Criminal Background Check system” known as NICS.

As for the bill Murphy was trying to pass, Grassley has “serious concerns.”

This bill is hostile towards lawful gun owners and lawful firearms transactions. This will not solve the problems that it seeks to solve. So-called universal background checks will not prevent crime, but will turn otherwise law-abiding citizens into criminals.

In contrast, Grassley claimed the bill he has reintroduced would “reauthorize and improve NICS, increase resources for prosecution of gun crime, and address mental illness in the criminal justice system.” He said it would also cover “straw purchasing and illegal firearms trafficking statutes” without burdening Second Amendment rights.

An overwhelming majority of Iowans (including most Republicans) also support background checks for all gun sales. But Grassley appears to be more worried about his standing with the conservative GOP base. The latest Iowa Poll by Selzer & Co for the Des Moines Register and Mediacom shows the senior senator’s approval has dropped to its lowest level in nearly 40 years, in part because just 71 percent of Republican respondents now approve of his work. In contrast, the same poll found 80 percent of Republicans surveyed approve of Senator Joni Ernst.

A December 2 news release from Grassley’s office boasted, “Grassley Shields Second Amendment From Liberal Attack.” That may play well in some GOP circles. However, the Democratic challenger in next year’s Senate race should not hesitate to remind Iowans that their senator directly intervened to preserve a loophole that allows many prohibited purchasers to acquire guns.

UPDATE: Forgot to mention that Grassley was eager to spread the word about his stance on this issue to his 668,000 Twitter followers.

In contrast, when President Joe Biden signed the bipartisan infrastructure bill last month, Grassley didn’t mention the event on his social media feeds, nor did his office send out a news release touting his vote for the measure. National polls have shown the infrastructure spending is broadly popular, but within the GOP many were angry at Republicans in Congress who supported that bill.