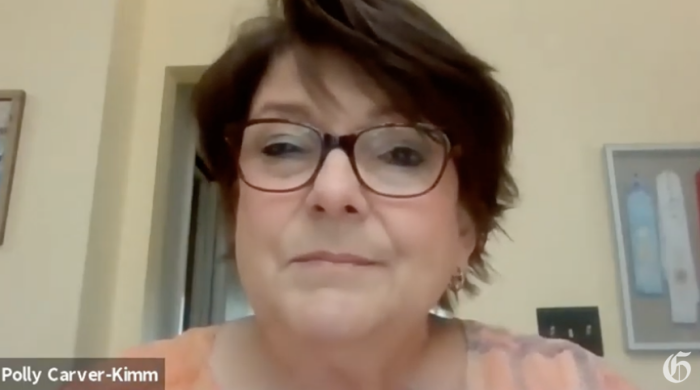 Carver-Kimm handled press contacts and public records requests for the IDPH for thirteen years before being forced to resign in July 2020. She asserts that she was "stripped of her duties and later terminated after she made repeated efforts to comply with Iowa's Open Records law (Chapter 22) by producing documents to local and national media regarding the State of Iowa's response to the ongoing pandemic."

District Court Judge Lawrence McLellan's December 22 ruling (enclosed in full below) affirmed the importance of the open records law and rejected the state's effort to remove Reynolds as a defendant in this case.

At this stage, the court was not deciding the merits of Carver-Kimm's claims. Rather, the court was determining which parts of the lawsuit can proceed to a jury trial, which is currently scheduled to begin in July 2022.

The state advanced several legal arguments in its motion to dismiss. The judge rejected all of them.

WHISTLEBLOWER CLAIMS AGAINST REYNOLDS AND GARRETT CAN PROCEED

Carver-Kimm's lawsuit cites Iowa's whistleblower law. The plaintiff asserts that her job duties were reduced and she was ultimately terminated after she had "regular conversations" with a human resources employee "where she reported and disclosed that, among other things, the ongoing removal of her duties and responsibilities amounted to mismanagement, abuse of authority and a specific danger to public health given the ongoing state-wide pandemic."

The state maintained that while Carver-Kimm can bring a wrongful discharge claim against some individuals, she cannot do so against Reynolds and Garrett because they "did not have the legal power" to fire her. "[O]nly the Director of Public Health could do that."

Judge McLellan noted that "On a motion to dismiss, the court accepts as true the petition’s well-pleaded factual allegations, but not its legal conclusions." Regarding this point, "the court concludes that Carver-Kimm set forth sufficient allegations in her petition that defendants Reynolds and Garrett effectuated her termination" by influencing or authorizing actions by IDPH leadership. The plaintiff can try to make this point at trial, where the jury in its fact-finding role will determine whether the governor or her communications director did wrongfully terminate Carver-Kimm's employment.

As Ryan Foley of the Associated Press was first to report in July, the state argued that the open records law is not “a well-recognized public policy” that can be cited in an employee's wrongful termination claim. The state's motion to dismiss acknowledged that "Chapter 22 has played a significant role in ensuring that state and local government remains accountable." But it went on to say the open records law does not give "an employee a right to sue if their termination wasn’t in the interest of 'free and open examination of records even if such examination may cause inconvenience or embarrassment to public officials.'"

The state's legal argument so alarmed transparency advocates that the nonprofit Iowa Freedom of Information Council intervened in this case to argue Carver-Kimm should be allowed to state this claim, and that dismissing her case "would chill future records production" by government entities. (Disclosure: the Iowa Freedom of Information Council and Bleeding Heartland are co-plaintiffs in an unrelated lawsuit stemming from the governor's failure to comply with the open records law.)

[A]ny state or local government employee could feel that his or her job is at risk if the person complies with the legal obligations contained in Chapter 22.

I worry that the State’s legal arguments in the motion to dismiss will be viewed by government officials and government employees across Iowa as a roadmap for how to circumvent the clear duties and obligations imposed upon them by the open records law.

There are plenty of citizens of Iowa besides myself who worry that if the State’s legal position is allowed to stand unchallenged that Chapter 22 will be severely weakened. That certainly will occur if employees feel their job security can be in jeopardy if they comply with Chapter 22 --- especially when their boss does not want to incur the anger of the city administrator, the mayor, the county auditor, or the superintendent.

We are not saying that Chapter 22 is to be ignored or is not important public policy. This brief is not a policy statement nor is it a general comment on Chapter 22. The argument is made in a very limited context regarding the way courts – here and elsewhere – have established “clearly defined and well-recognized public policy” in the context of the at-will employment doctrine.

The trial judge and jury will eventually decide whether facts support the third and fourth points. As for the first two points (which are matters of law, not facts), Judge McLellan found,

The court does not agree with the defendants’ argument that recognizing such a public policy exception would open the litigation “flood gates." [...]

Moreover, the policy would not “eviscerate at-will employment within state government” as alleged by the State.71 The public policy at issue here is limited to chapter 22 and the “lawful custodians” who are charged with complying with open records requests under Iowa Code section 22.1. [...] Carver-Kimm had the specific obligation to fulfill open records requests for IDPH. She contends she did so and was forced to quit based on her performance of this duty. Thus the narrow and clearly defined public policy that protected Carver-Kimm’s employment activity was her designated role as the lawful custodian under chapter 22 responsible for implementing the requirements of chapter 22 for the IDPH. As the lawful custodian she should be allowed to fulfill her obligations under chapter 22 without reprisal if done legally and properly.

The state cited three cases from other states to support its claims that the open records law can't be the basis for a wrongful termination claim. But none of those cases were comparable, because none of the individuals had been fired "for properly producing public records." The District Court did not find any of the cases from other jurisdictions "persuasive."

Judge McLellan concluded, "there is a sufficiently clear and well-recognized public policy under Iowa’s open records law that protects Carver-Kimm’s activities when complying with open records requests and performing the duties of her employment." Furthermore, the court determined "that this public policy would be undermined if State employees, designated as law custodians under chapter 22, were forced to quit when they complied with or attempted to comply with the provisions of chapter 22."

Again, the recent court ruling does not guarantee Carver-Kimm will be successful at trial. It means a jury can decide whether she was wrongfully terminated for attempting to do what the open records law requires. The Iowa Freedom of Information Council's Evans told Bleeding Heartland in a December 27 email,

The Council is pleased the judge saw through the state’s attempt to get the Carver-Kimm lawsuit dismissed.

The issues raised in the lawsuit  — that Polly Carver-Kimm was forced out at the Iowa Department of Public Health because she was too cooperative with journalists seeking public records — are quite troubling and deserve to be heard in a district court trial.

In June, Reynolds signed into law a wide-ranging policing bill that granted qualified immunity to state employees against some lawsuits seeking monetary damages. Most commentary about that part of the bill focused on its implications for cases against law enforcement officers alleged to have violated citizens' constitutional rights.

Carver-Kimm filed suit in September 2020, but amended her petition twice during the summer of 2021. The state's motion to dismiss argued that since the second amended petition was filed with the District Court in August, the new qualified immunity statute should apply, giving Reynolds and Garrett protection against liability for a wrongful discharge claim.

The big picture is that Reynolds and Garrett (who is now working on the governor's re-election campaign) will be defendants in a high-profile trial scheduled to begin less than four months before the 2022 election. I anticipate the state will try to delay the Carver-Kimm trial until after Iowans have voted on whether to give Reynolds another four years in office.