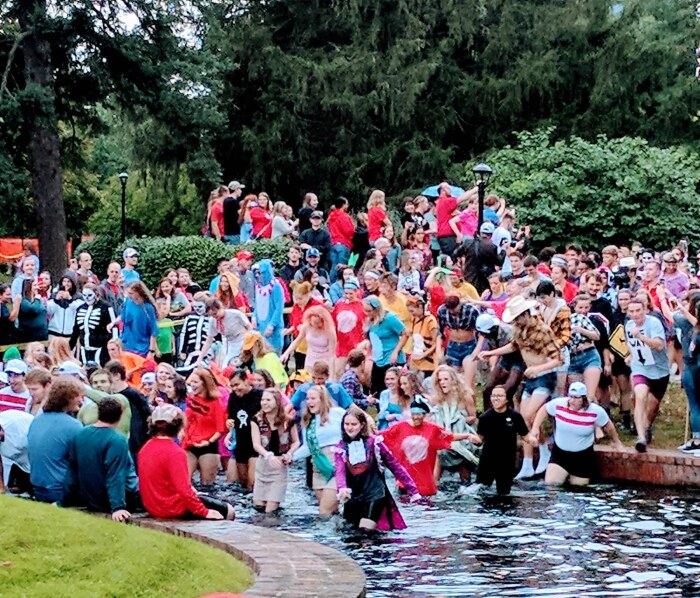 Iowa is being led off a cliff

Bruce Lear: What once were fringe ideas have become mainstream in the GOP echo chamber.

When I was at Central College in Pella during the mid-1970s, the Lemming Race was born in honor of the furry little rodent that strangely follows its leader right off a cliff.

Here’s how the race works. A group of costumed racers gather at the library, run to the pond in the center of campus, and jump in. If onlookers get too close to the edge, they’re pulled in too. The race is led by a Grand Lemming, nominated and elected in some mysterious way. It was fun, harmless, and now a Homecoming event going strong for over 40 years.

I was again reminded of that Central tradition when I watched a self-satisfied Governor Kim Reynolds deliver her Condition of the State speech to a chamber packed with legislative lemmings willing to take Iowa off that cliff.

What once were fringe ideas have become mainstream in the GOP echo chamber. For example, the flat tax is nothing new. It’s been around since proponents showed that a tax return could be done on the back of an envelope. Usually, the thinking adults in the room would cause the flat tax to fall flat, realizing government spending for essential services would immediately need life support. But thinking adults are in short supply.

Under the governor’s four-year flat tax plan, revenue to keep the lights on in 2023 would plummet by $1.6 billion. Although she didn’t say what the total loss of revenue after her four-year phase in would be, I’d suggest it might be considerably north of $4.6 billion. After that phase in, I’m sure Dorothy would feel right at home here, because Iowa would morph into Kansas during its tax cutting mania days.

Before Iowans applaud the strangling of government spending, remember the derecho, the floods and the tornadoes. That’s when all the “small government lovers” search for the love coming from government assistance.

Even when there isn’t a natural disaster, Iowans expect basic government services. We expect the fire department will put out our fires, the police will arrest the bad guys, the garbage will be picked up every week, and schools will remain open. We expect government to spend wisely, but we want government to provide.

Another reason the adult leaders of the past rejected a flat tax is it’s as regressive as sales tax. 4 percent of a person’s income at the poverty level is far different than 4 percent of the political donor class funding Governor Reynolds' campaigns. A flat tax is simple. But like Dad always said, “Simple doesn’t solve hard problems.”

The Grand Lemming—I mean, governor—also proposed some so-called education reforms. I’m afraid educators are in an abusive relationship with the governor and her pals in the Legislature. She dangles a $1,000 bonus in front of teachers, then bashes them in the next part of the speech.

First, $1,000 is certainly needed by teachers, but it’s also needed by the whole education family. That includes para educators, receptionists, cooks, bus drivers, and school administrators. Instead of proposing a shiny bonus, the governor and the legislature need to provide at least 5 percent or more in State Supplemental Aid, the allowable growth for school budgets.

By the way, that $1,000 bonus will funded by the Biden administration, not from any state budget surplus.

Next summer and fall during their campaigns, we’ll hear about the inflation caused by evil Democrats. But Inflation never seems to figure in when deciding school funding. Reynolds proposed a 2.5 percent increase in state aid, even though inflation will devour that amount.

If Iowa continues to underfund public schools to the tune of 2.5 percent, the teacher shortage is going to mean classrooms full of students with no teacher.  A bonus that amounts to $5.55 per day for one year won’t keep teachers in an abusive relationship.

Running a school takes funding, and most won’t be interested in capping their tuition at $5,340, at the same time they are financing a startup of special education programs and additional scholarship programs to meet the new demand. No one knows the exact cost of this program, but an estimated 10,000 students would be eligible.

My guess is the Urban Network, and the larger suburban schools might also object to the diversion of $2,300 to help smaller schools. Larger schools are struggling, just like their rural counterparts.

The reason behind this specific proposal is clear. Reynolds was unable to pass a private school scholarship last session, because rural GOP legislators woke up. They realized their towns could become education deserts with a poorly funded public school and no private school within driving distance.

But the abuse didn’t stop there. In her Condition of the State, the governor also proposed that schools be required to publish online all class materials, including textbooks, syllabuses, and standards, as well as a comprehensive list of books in the school library. If the school district doesn’t respond within 30 days to any parental complaint about the material, the complaint goes to the state Department of Education, bypassing the local, elected school board.

The governor made this proposal in the name of transparency. But it’s her motives that are transparent. She wants to appease the GOP's extreme base by attacking the professionalism of every educator in Iowa.

The things she wants published aren’t a deep secret. Any parent may easily find out what’s going on in class by simply talking to teachers at parent teacher conferences, visiting the classrooms, or discussing what’s happening with their own children. Also, the card catalog in the library isn’t in a vault. It’s not about transparency.  It’s about control.

We don’t need legislative lemmings listening only to a loud base drowning out the rest of us warning about the cliff only steps away. The only real guard rail is at the November ballot box. Iowa can do better.

Top photo of the Central College Lemming Race in 2018 was taken by Bruce Lear and published with permission.