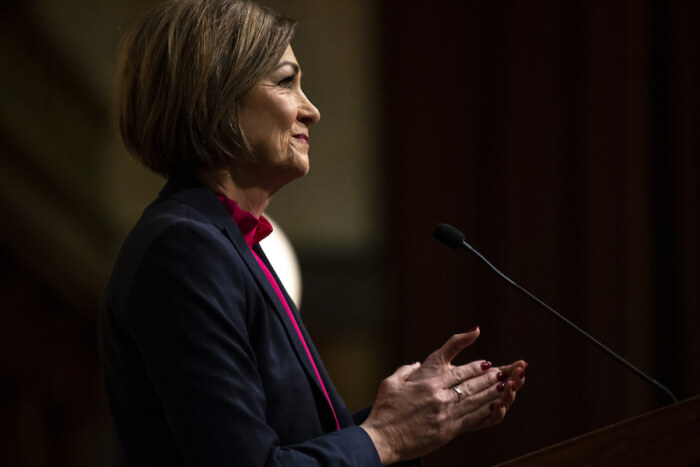 Randy Richardson: Most of the benefit will go to middle class students in regular education and small districts in heavily Republican areas.

During her recent Condition of the State address, Governor Kim Reynolds announced her intent to create Students First Scholarships. Among educators these “scholarships” are more commonly known as “vouchers.”

Parents could use the scholarships to cover the costs of moving their children from public schools to private ones. Any remaining funds could help cover qualified education expenses such as tutoring, curriculum or material costs, vocational or life skills training, and community college or other higher education expenses.

Each voucher will be equal to $5,359, or 70 percent of a state education funding for each K-12 public school student. The remaining $2,270 or 30 percent will remain with the state to be reallocated to smaller, often rural, school districts.

According to the governor, this will be done because losing funding for just one student can have a significant impact in a small rural school. Of course, this is an election year and those small schools happen to be located in heavily Republican parts of the state.

In order to be eligible to receive these vouchers, students must be currently enrolled in a public school for the 2021-22 school year and have a household income that does not exceed 400 percent of the federal poverty level or have an individualized educational plan (IEP).

The total number of vouchers will be capped at 10,000 during the first year of implementation and divided equally between the two eligibility groups. If the total number of available scholarships for either group is not used and a waiting list exists for the other group, the remainder will be awarded to those eligible applicants.

The governor has clearly put some thought into these eligibility guidelines. It’s important to look closely at them to see which families could benefit from the programs.

First, let’s examine the income threshold. The current federal poverty level for a family of four is $26,500. Under the eligibility guidelines a family of four with a household income of $106,000 or less qualifies for a voucher. According to calculations from the Pew Research Center about 80 percent of Iowa families fall below the $106,000 income line making them eligible for this assistance.

The second qualification allows any student with an IEP to qualify for a voucher. According to information available from the Iowa Department of Education there are approximately 65,000 students in Iowa on an IEP.

At the beginning of this school year, 32,689 students attended one of Iowa's 180 private schools. The vast majority of these are small K-6 schools. The average tuition to a private elementary school is $4,560 per year, rising to $9,202 per year for a private high school. The average K-12 private school tuition is $5,295 per year, which magically is almost equal to the $5,359 that Reynolds wants to make available to students.

While the governor’s vouchers will offset the costs for most private elementary students, they don’t come anywhere close to covering private high school tuition. This is where the income guidelines become important. In order for low income families to access private schools, they will also need access to transportation and to additional funding. Since they aren’t as likely to have access to either, we can assume that the bulk of the benefit will be going to families who are closer to the upper end of the income eligibility guidelines.

While the vouchers look good on the surface, it’s obvious that most of the benefit will go to middle class students in regular education. Reynolds may say these are intended to support low income, special needs students, but in reality that isn’t likely to happen.

That leaves one other major issue with this proposal. Remember the $2,270 that the state will reallocate to smaller, often rural, school districts? If all 10,000 vouchers are used, that will generate $22,700,000 in revenue that will move from larger school districts to smaller districts. Right now the governor hasn’t offered any specifics about what schools would qualify as small rural districts.

Let’s assume she decides to provide this money to any district with a K-12 enrollment below 1,000 students. Right now, about two-thirds of Iowa school districts (216 out of a total of 327) would qualify for these funds. Those 216 school districts enroll a total of 113,743 students or 23.4 percent of all students in the state. Each small, rural school district would receive an additional $199.57 per student.

Perhaps the governor will direct the money toward the smallest districts. There are currently 102 school districts (31.2 percent of all districts) with enrollments under 500 students. These 102 districts enroll a total 34,726 students (about 3,000 more than the Des Moines Public Schools, the state's largest district). If all vouchers are used and additional funds are provided to these districts then each school district would receive $653.68 per student.

Having taught in a small district, I know these schools have been slowly starved by the consistent underfunding of education for the last decade. However, taking money away from larger schools to support smaller schools makes no sense. The plan appears to be political, rather than drawing on good public policy: the governor's plan failed to advance in the Iowa House last year due to concerns from some GOP lawmakers representing rural areas.

Iowa's larger school districts are in predominantly Democratic strongholds. They tend to have higher poverty rates, greater behavior issues to deal with, and more students who come from non-English speaking homes. Surely that money would be better spent in those districts.

At this writing, we haven’t seen any legislation containing greater details on how Reynolds plans to implement this proposal. It looks like yet another attempt to give middle and upper income students in urban areas a chance to leave the public school system for a private school, as well as a way to reward the governor’s followers in rural Iowa.

Education has been underfunded for the last ten years. It’s time for the governor and Republican lawmakers to recognize this and end their war on public school students.