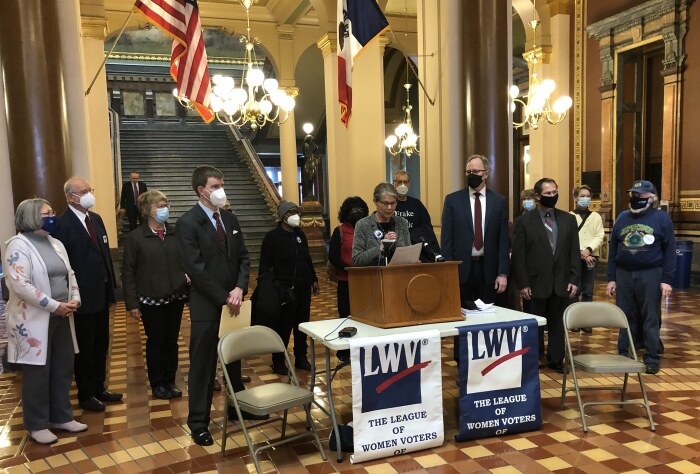 Steve Corbin is a freelance writer and emeritus professor of marketing at the University of Northern Iowa.

Jury service is one of the most important civic duties you can perform. Soon you can serve as a juror to determine whether Iowa’s voter suppression law, which Governor Kim Reynolds signed on March 8, 2021, is fair and balanced. The lobbyist declarations show this law was not requested by Iowa citizens but supported only by right-wing think tanks and conservative groups. [Editor's note: Portions of that law are being challenged in court.]

2. The Brennan Center for Justice observed last year, "Flor­ida, Geor­gia, and Iowa have each used single omni­bus bills, which incor­por­ate many restric­tions, to under­take a full-fledged assault on voting."

3. Heritage Action, a group affiliated with the Heritage Foundation submitted model voter suppression legislation for Iowa’s GOP to adopt. (The Iowa lawmakers who drafted the election bills denied being influenced by the group.)

5. A Washington Post review of local news reports found that only sixteen incidents of voter fraud occurred out of 159 million ballots cast in the 2020 general election, a rate of 0.00001 percent.

6. The Brennan Center found only 31 credible allegations of voter impersonations out of approximately 1 billion ballots cast over a fourteen-year period, a rate of 0.0000031 percent.

7. Fifteen Iowa-based not-for-profit and non-partisan organizations came to the state capitol on February 14 to present 5,718 signatures of voters residing in 333 different Iowa zip codes. The groups asked the Republican trifecta to change portions of two election laws enacted in 2021 (Senate File 413 and Senate File 568). (You can watch video from the event here.) Not one Republican legislator, or GOP staff member came to listen to their constituents' concerns. Neither did Governor Reynolds.

9. ACLU of Iowa executive director Mark Stringer noted during the February 14 event, “one million of the 1.7 million Iowans (~59 percent) who voted in the 2020 election did so by absentee ballot. Despite a clean and secure election, the legislature and governor enacted a law to limit absentee balloting, which defies reason.” Stringer contends legislators should support, protect and defend voters, not limit voting opportunities .

10. According to a League of Women Voters survey of Iowa county auditors, more than 600 duly registered voters did not vote in the 2021 election due to Iowa’s new jump-through-the-unnecessary-hoops absentee ballot restrictions. (Under previous Iowa law, their absentee ballot request forms would have arrived on time, or their ballots could have been counted after election day if mailed on time.)

11. Terese Grant, President, League of Women Voters of Iowa, received an e-mail from a fellow Iowan. The lady was hospitalized before the November 2021 local and school board elections. She contacted the county courthouse to find out which Saturday she could vote and was told citizens weren’t allowed to do that and it was too late to send her a mail-in ballot. For the first time in 42 years, she did not participate in an election.

Ladies and gentlemen of the jury: what say ye?

Are Iowa Republican lawmakers and Governor Reynolds guilty of unnecessary voter suppression? Do you think Republican officeholders even care to listen to Iowans’ concerns about the anti-voting legislation? Are our GOP civil servants ignoring the facts about voter fraud, which is practically non-existent?

My verdict: Iowa’s Republican legislators and governor are guilty of purposeful voter suppression. Their kowtowing to think tanks and corporate or industry trade groups—rather than to the Iowans they were elected to represent—is appalling and inexcusable.

Top photo of February 14 event at the capitol provided by the League of Women Voters of Iowa and published with permission.