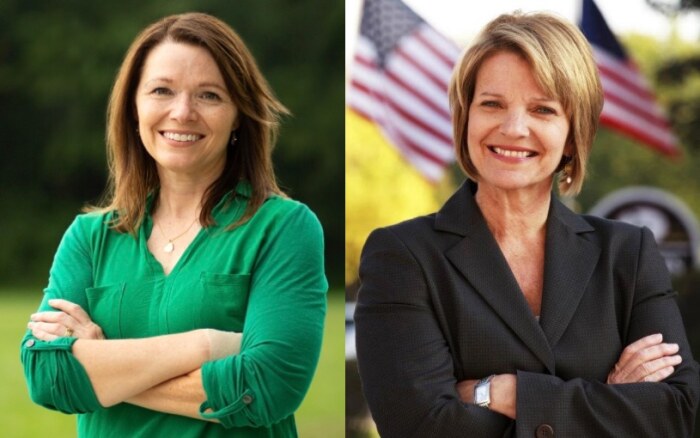 Two Iowans are among the Democratic Congressional Campaign Committee's twelve top-tier U.S. House challengers. Politico's Ally Mutnick was first to report on the DCCC's initial group of candidates added to the "Red to Blue" program, aimed at flipping Republican-held districts.

No-party voters have tended to favor Republican candidates in recent elections; Bohannan and Mathis will need to do better among independents to win their respective races.

The DCCC considers other factors when deciding whether a candidate is viable enough to be in the "Red to Blue" program. For instance, they must demonstrate the ability to raise enough money to finance a district-wide campaign. During the third and fourth quarters of 2021, Bohannan raised more than $650,000 and had $486,387.41 cash on hand at the end of the year. Mathis raised nearly $1.2 million during 2021 and had $933,043.50 cash on hand as of December 31.

As is usually the case, the Republican incumbents in each district out-raised their challengers. Going into the election year, Miller-Meeks' campaign had $1,837,153.86 in the bank and Hinson's had $1,597,477.65. (Click here and here for more details on Iowa Congressional candidates' fundraising and spending during 2021.)

Internal poll numbers should always be taken with a grain of salt, since campaigns only release what they want the world to see. That said, the Public Policy Polling survey for Mathis did not appear to have a skewed sample; 47 percent of respondents said they voted for Trump and 42 percent for Biden.

Also worth nothing: Hinson's campaign paid for "survey research" during 2021 but hasn't released any numbers from an internal poll. That could indicate the incumbent didn't have a comfortable lead over Mathis.

Appendix: Statements from the Christina Bohannan and Liz Mathis campaigns, released on March 10

Bohannan added to DCCC “Red to Blue” Program, making clear IA-01 is a top pick up opportunity for Democrats

In 2020 this seat was lost by only six votes, making it a top target as a pickup opportunity for Democrats.  DCCC support for this race reflects the fact that Southeastern Iowans are ready to elect a representative who understands their day-to-day struggles and who will put Iowans’ needs above partisan politics to deliver real results.

"I am excited that my campaign has been added to the ‘Red to Blue’ list,” said Christina Bohannan. “We’re building a grassroots campaign focused on creating and expanding opportunities for all Iowans.  With the DCCC’s support I will continue to work hard to win this election so I can bring honesty and integrity to this office and put the needs of Iowans ahead of party politics.”

“Christina Bohannan has spent her time in public office fighting for working families, looking out for seniors, pushing for more investment in public schools, and helping Iowa families and small businesses recover from COVID-19,” said DCCC spokesperson Elena Kuhn. “Now she’s bringing her fight to expand opportunities for all Iowans to Congress as she runs against Mariannette Miller-Meeks – one of the most vulnerable members of Congress, who only barely eked out a win in 2020. The newly reconfigured district has only gotten more favorable for Democrats, and Christina Bohannan is well-positioned to flip this seat blue in November.”

About Christina: Christina Bohannan is a mom, law professor, state representative, and former engineer. She is running for Congress because she believes we need less bickering in Washington, and more working together -- for a government that works for the people. Christina will fight every day for Iowa families, kids, and small businesses because she believes if you work hard, you deserve a fair shot to get ahead. Christina is running for Congress because she believes we need a government that works for the people, not Washington special interests.  Too many Iowa families are struggling, worrying they’re just one bad break from not making ends meet, like her family was when her dad got sick. In Congress, Christina will work for more technical and vocational training for high-skill, high-wage jobs right here in Iowa, greater investment in our kids and schools, real steps to make Iowa a clean energy leader, strong protections for voting rights, and better access to quality, affordable health care and broadband all across Iowa.

Mathis was one of only 12 candidates who earned a spot in the first class of its Red to Blue list for the 2022 election, a declaration that the DCCC believes Iowa’s Republican-held 2nd Congressional District is vulnerable and now an offensive target for the Democratic party.

“Being named to the DCCC Red to Blue program is another huge milestone for our campaign,” said Liz Mathis. “The DCCC knows that our strong grassroots organizing, record-breaking fundraising and incredible outpouring of support from Iowans across the district make this race winnable. I am honored to be named as part of this class of Red to Blue challengers and am grateful to everyone who has pitched in to grow our team. With our supporters' and the DCCC’s backing, I know we can flip this seat and deliver for Iowa families, farmers, and small businesses."

Candidates are added to the Red to Blue program after hitting significant benchmarks related to overall campaign infrastructure, fundraising and on the ground engagement. The program arms top-tier candidates with organizational and fundraising support, strategic guidance, staff resources, candidate training and more.

“Liz Mathis has spent over a decade fighting for Iowans in the State Senate. Now she’s continuing that record of service and problem-solving leadership by running to be a champion for IA-02 in Congress,” said DCCC spokesperson Elena Kuhn. "Northeast Iowans have continuously been failed by Ashley Hinson who always sides with Washington party leaders even when it means voting against infrastructure investments, jobs, and economic growth for Iowa. Liz is gaining momentum by the day and her broad grassroots support from across the district will propel her to victory in November.”

A Mathis campaign internal poll, conducted February 2-3 by Public Policy Polling, showed Mathis with 42% of support to Hinson’s 43% with a 3.9% margin of error. Fifteen percent of voters were undecided. Last month, nonpartisan election forecaster FiveThirtyEight gave the poll an “A-minus” and the Cook Political Report upgraded their rating of Iowa’s 2nd Congressional race toward Mathis.

About Liz Mathis: Liz Mathis has been a journalist, a non-profit leader and a State Senator - no matter the role, she has listened and been a voice for Iowa families. After putting herself through college and earning a degree in journalism, she became an anchor for KWWL and KCRG, where she listened to Iowans and told their stories for 27 years. After her career in journalism, she continued her service as a non-profit leader in Cedar Rapids, helping families recover from floods and supporting children and adults requiring mental health care and basic needs. Serving in the State Senate since 2011, she has spoken up for families struggling with the state’s Medicaid program and created numerous measures that focused on children, Iowa’s economy and educational growth. Mathis and her husband Mark live in Hiawatha. They raised their kids, Mark and Mary Fran, in Waterloo and Robins.