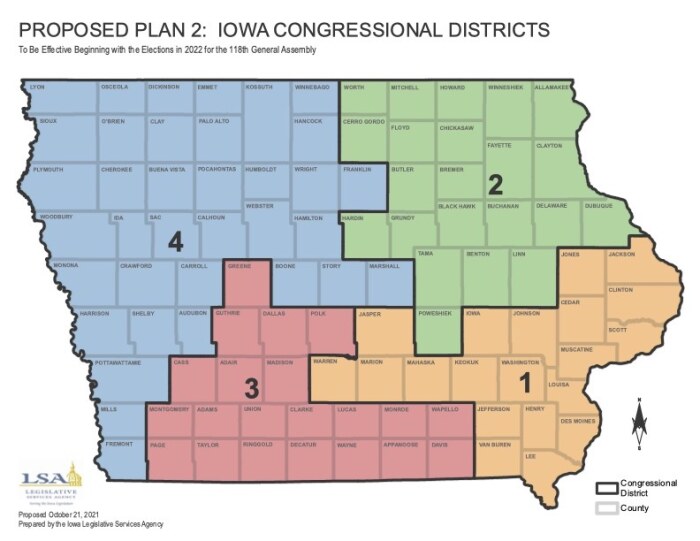 As election year approaches, the leading national political forecasters have updated their analysis of the coming U.S. Senate and House elections. Larry Sabato's Crystal Ball revised its House ratings on December 16, while Inside Elections with Nathan Gonzales and the Cook Political Report did so on December 28 and December 29, respectively.

The consensus is that Republicans are favored to win most of Iowa's Congressional races, but the one House district held by a Democrat is a toss-up.

The latest Iowa poll by Selzer & Co for the Des Moines Register and Mediacom found that 45 percent of Iowans approve of Senator Chuck Grassley's work, 41 percent disapprove, and 13 percent are unsure. That's the lowest approval rating for Grassley since 1982, and his highest disapproval number recorded by Selzer.

So U.S. Representative Mariannette Miller-Meeks, who now represents IA-02, will be running for re-election in IA-01. This district's "partisan voting index," based on results from the 2016 and 2020 presidential elections, is R+3, meaning the 20 counties in IA-01 voted about 3 points more Republican than the U.S. as a whole.

Cook Political, Crystal Ball, and Inside Elections all put this race in the "likely Republican" category. Miller-Meeks faces a GOP primary challenger, but the only opponent who could threaten her re-election is Democrat Christina Bohannan.

The forecasters disagree on the new IA-02, where Republican Representative Ashley Hinson will likely face Democrat Liz Mathis. Inside Elections and Crystal Ball both see this race as "likely Republican," while Cook placed it in the "solid Republican" group.

I agree that Hinson is favored to win a second term, especially with President Joe Biden's approval numbers in the 30s in Iowa. But to call this district uncompetitive seems extreme. Its partisan voting index is R+4; the vast majority of Cook's solid Republican districts are much more skewed to the GOP than that. Perhaps a long-serving incumbent could be considered safe in an R+4 district, but Hinson's only won once, with Donald Trump pulling her over the line.

Furthermore, Mathis has many strengths as a candidate and raised a lot of money during her first quarter. (Year-end fundraising reports will become available in late January.)

UPDATE: Cook Political changed their rating of this race to "likely Republican" on February 2.

The forecasters agree that the third district race is a toss-up. The new IA-03 has a partisan voting index of R+3, but U.S. Representative Cindy Axne has won two close races under difficult conditions (facing incumbent David Young in 2018 and having Trump drive enormous GOP turnout in 2020).

Axne's likely opponent next November is Zach Nunn. He has the National Republican Congressional Committee's backing and out-raised his GOP rivals in the third quarter. I would not be surprised if the other declared candidates (Nicole Hasso, Gary Leffler, and Mary Ann Hanusa) end up not filing for the GOP primary in March.

As for Iowa's new fourth district, all the forecasts agree that first-term Representative Randy Feenstra is a safe bet to be re-elected. The 36 counties in IA-04 voted about 16 points more Republican than did the U.S. as a whole in the last two presidential elections. Only a GOP nominee as toxic as Steve King could put this district in a competitive category. I am not aware of any Democrats actively campaigning here.