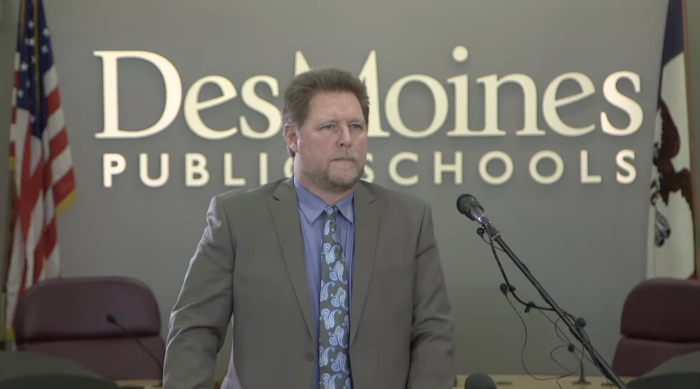 Des Moines Superintendent Thomas Ahart has been a lightning rod during the past three years over the way Iowa’s public schools have responded to the COVID-19 pandemic.

Ahart announced last week that he is leaving, effective June 30. But the Des Moines school board ensured that Ahart will continue to carry that lightning rod for a little longer.

But you would be wrong, wrong, and wrong.

Even though he will not be employed by the Des Moines schools after June 30, Ahart will still be paid every nickel, every dime, and every dollar that he would have received had he chosen to work those twelve months left on his contract.

This means Ahart will be paid as much to relax full-time as he would have been paid to work full-time.

The lucrative “separation agreement” was approved by the Des Moines school board during a special board meeting two days after he announced his resignation. The meeting lasted two minutes. Yes, two minutes — and it included time to call the roll, approve the agenda and vote on the agreement.

No one asked any questions. There was no discussion of the agreement.

Among the questions not addressed were some that might be of interest to the taxpayers of Iowa, to residents of the Des Moines school district, and to the teachers and other employees of the district. Such as:

Ahart’s $400,000 cash payout is equivalent to the minimum salary for nine Des Moines teachers. How can the school board justify an expense that large at a time when the district is looking for ways to wipe out a projected $9 million budget deficit for the coming school year?

Educators from across Iowa and supporters of the state’s public schools pushed the legislature for a larger appropriation than Republican lawmakers favored. Hasn’t the Des Moines board’s decision seriously undercut the message these advocates made to the legislature — that the majority party was failing to help public schools keep pace with inflation?

Ahart’s supporters remind us that the school board decided last year not to extend his contract beyond June 2023. That decision came amid statewide controversy over his and the board’s joint decision to begin the 2020-2021 school year with all classes online — in spite of a new state law that required at least half of the classes to be held in person.

Des Moines’ decision to have all classes online prompted the Iowa Board of Education Examiners, the state licensing agency for school administrators and teachers, to reprimand Ahart for violating the new law.

Ahart is disliked by some people and adored by others. He shouldered tremendous responsibilities in the decade he has led Iowa’s largest K-12 school district — educating 31,000 students annually, adapting the curriculum to changing needs, improving graduation rates, improving building security, and coping with the worst health crisis in a century.

But the reaction to this $400,000 severance package — a “lovely parting gift,” as game show hosts of old might call it — should go beyond whether we like Tom Ahart or not.

The agreement with the school board makes abundantly clear that his resignation was voluntary and was not being made in lieu of termination. The agreement includes the standard binding promises by each party not to sue the other party.

But the undeniable fact remains: Ahart is leaving now, rather than a year from now, because of his own choice.

Every Des Moines teacher signs a one-year contract each school year. Midway through the year, if a teacher decides to resign, the school board is not going to pay the teacher for the unearned salary and benefits for the remainder of the contract. Instead, officials reserve the right to levy a fee against the teacher for the district’s cost of finding a replacement.

This agreement is not saving the Des Moines school district and the taxpayers of Iowa money. There still could be lawsuits against the district over the school board’s and Ahart’s decision to disregard the requirement for 50 percent of classes to be in person when the 2020-2021 school year began.

If that occurs, the separation agreement includes Ahart’s pledge to cooperate with and assist the district’s legal defense. Not surprisingly, given the other content of the document, Ahart will be compensated for his out-of-pocket expenses and for his time in providing that help — “at the rate of $147.00 per hour, to the nearest quarter hour,” the agreement says.

Don’t expect school officials or Ahart to address the questions I laid out earlier. There’s another interesting detail in the agreement that addresses pesky people like me.

The agreement says the board and Ahart “will develop a mutually agreeable statement regarding Dr. Ahart’s resignation from the district, which shall be the sole statement from the parties, including board members in their individual and official capacity.”

That means the taxpayers of Iowa who are paying for his going-away gift won’t be getting answers to their very logical questions.

Top image: Dr. Tom Ahart at a February 28 press conference where he announced his planned resignation. Screenshot from the official video.