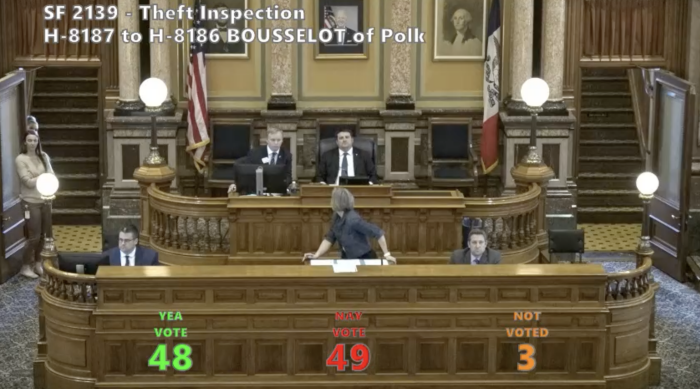 You don't see this every day—or every year. Despite having a 60 to 40 majority, Iowa House Republicans lost a floor vote this week on a high priority bill for GOP leaders.

Controlling the calendar is one of the most important powers of the majority party. Nothing comes to the Iowa House floor unless Speaker Pat Grassley and Majority Leader Matt Windschitl want members to vote on it. Leaders typically don't bring up any legislation unless they are confident they have the votes to pass it.

On March 16, Grassley thought he had 51 votes for a mash-up of two controversial bills. But his ability to count (and to persuade reluctant members of his caucus) fell short.

Several bills House leaders wanted didn't pass last year, when Republicans had a 59 to 41 majority. Those included cuts to unemployment benefits, limits to awards in medical malpractice cases, and damage caps for lawsuits against the trucking industry.

When the sixtieth House Republican won a special election last October, and Governor Kim Reynolds endorsed reducing benefits to jobless Iowans in January, I thought all of those bills had a good chance of getting through this year. But weeks passed without any of them coming to the House floor, which is usually a sign that leadership hasn't lined up 51 votes behind them. Moreover, the latest Iowa Poll by Selzer & Co for the Des Moines Register found most Iowans oppose cutting unemployment benefits.

House leaders resorted to the time-honored tactic of logrolling. Some people at the statehouse have been calling this concept a "Frankenstein bill" because of how it's stitched together.

Instead of trying to run a new bill through committee, House leaders prepared an amendment to an unrelated bill that was already eligible for House floor debate. The amendment had two big parts: a revised version of trucking industry "tort reform" and limits on requiring employees or customers to be vaccinated for COVID-19, or to reveal their vaccination status. (According to the Cedar Rapids Gazette, an earlier "Frankenstein bill" had combined limits on lawsuits against the trucking industry with unemployment benefit cuts.)

The Republican amendment would have banned private employers from requiring employees to prove their COVID-19 vaccination status. Businesses that did would have faced fines of $50,000 — half of which would have gone directly to the employee. Schools, child-care centers and colleges would also have been prevented from requiring students to be vaccinated.

It would have also banned businesses, educational institutions or local governments from requiring masks, testing or “unfairly discriminating” against someone based on their vaccination status.

The bill would not have applied to businesses that are required by federal law to mandate COVID-19 vaccines. [...]

In lawsuits over commercial vehicle accidents that cause a serious injury or death, the bill also would have created a cap of $1 million per plaintiff for noneconomic damages, or money recovered for injuries such as pain, suffering and emotional distress.

The cap would have been adjusted for inflation every two years beginning in 2026. The cap would not have applied in cases where the driver of the vehicle was operating under the influence of alcohol or drugs.

However, the amendment retained language from last year's bill that would have shielded trucking companies from lawsuits based on the employer's "direct negligence in hiring, training, supervising, or trusting the employee" whose harmful or negligent conduct prompted the litigation.

The drama ensued a little before 5:00 pm on March 16. Windschitl called up Senate File 2139, a bill "relating to wrecked or salvage vehicles with cosmetic damage." Remember, House leaders can't introduce a brand-new bill on the floor without running it through a committee. But they can radically alter an existing bill's content, using an amendment.

State Representative Mike Bousselot offered an amendment, and then an amendment to that amendment (which combined the tort reform and COVID-19 vaccine language). House Minority Leader Jennifer Konfrst asked for a ruling on germaneness, and Grassley declared her point well-taken: the amendment was not germane.

Bousselot then called for a motion to suspend House rules to allow immediate consideration of his amendment.

That kind of procedural vote is usually a foregone conclusion in the Iowa legislature. A vote on a motion to suspend the rules almost always falls strictly along party lines. If the majority party offers the non-germane amendment, a majority agrees to let the vote proceed.

As it became clear Republicans were going to lose this vote, House Chief Clerk Meghan Nelson looked back at Grassley, appearing to ask how to proceed. A screenshot from the official video: 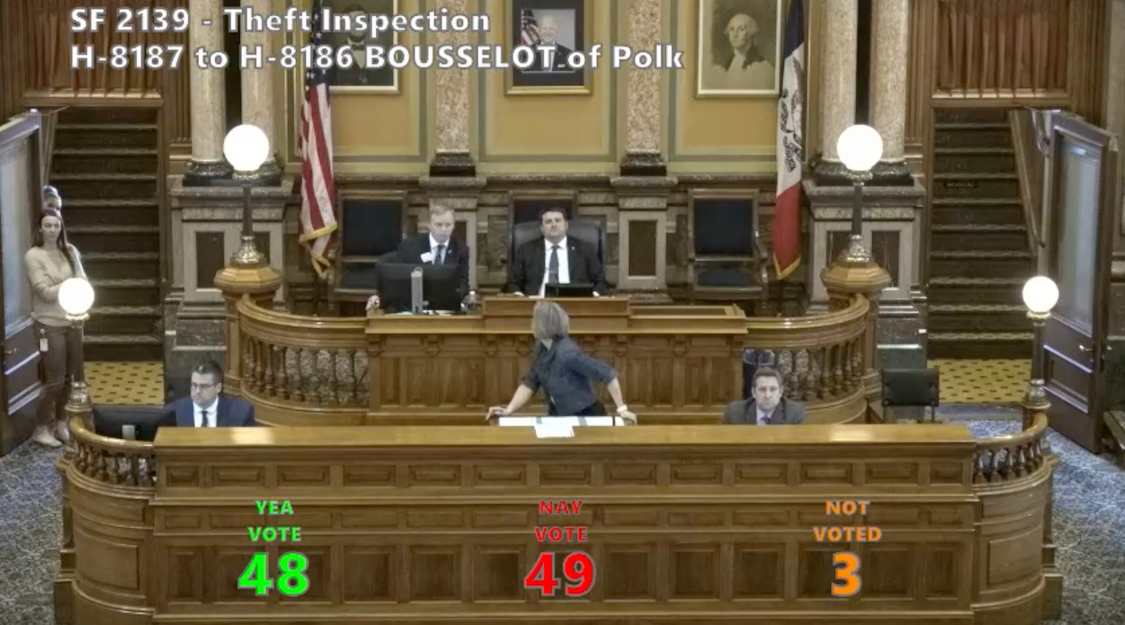 After a few minutes of discussion in the well, Windschitl asked to defer consideration of the bill, which makes it eligible for debate another day if Republicans get their ducks in a row on this or another amendment.

In the fifteen years I've closely followed the Iowa legislature, the only comparable failure that I can recall happened in 2009, when Democrats were unable to get a prevailing wage bill through the Iowa House.

Grassley told reporters on March 17 that while his team didn't expect the result, "I look at it as just we know we have more work to do to continue to look at some of the issues that we face."

Decoupling the issues could be part of a path forward. Several of the Republican "no" votes on this amendment take a hard line against any COVID-19 vaccine requirements and would want probably want that part of the bill to go further (Andrews, Cisneros, Salmon, Shipley). Several others are attorneys (Lohse, Hite, Jones); last year, Lohse questioned the constitutionality of bills that restrict a jury's ability to award damages.

"My job is to make sure you can find compromises to get to 51 votes. That was not part of where we thought we could find that agreement within the caucus," Grassley said of the unemployment language. "Not necessarily that that was the hang-up but we were trying to make it as few issues as possible."

The unemployment bill remains alive this year, and Grassley said Republicans will continue to talk about whether it has a path forward.

This kind of difficulty is common when one party holds a narrow majority—say, 51-49 or 52-48. It's remarkable to see several bills not moving in a 60-40 chamber, though. Also worth noting: the governor's plan to divert public funds to private schools through "student first scholarships" is again stalled in the House after easily clearing the Iowa Senate.

The humiliating outcome for leaders on March 16 could embolden Republican holdouts on other bills, or it could inspire Grassley and Windschitl to step up the pressure on members who don't play ball.

Another possibility: legislation that couldn't pass on its own may be added to appropriations bills in the final days of the session, when lawmakers are are eager to approve a state budget and go home.