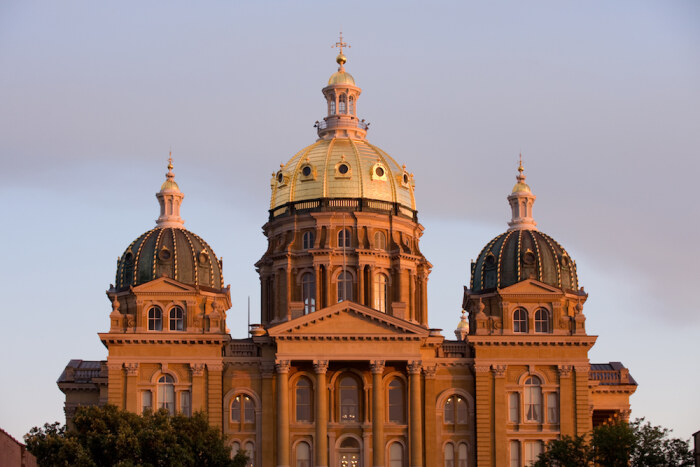 The Iowa House and Senate adjourned late in the evening on May 19 after finishing most of their work for this year. (Lawmakers will almost certainly come back for a special session to consider new maps of Iowa's legislative and Congressional districts.)

In the coming days, Bleeding Heartland will closely examine several bills that passed in the late session rush. For now, I want to review the legislation that by some minor miracle didn't make it to Governor Kim Reynolds' desk, in spite of support from powerful interests.

All of these bills are likely to return in some form during the 2022 session, so don't celebrate too soon. House Republicans were unable to pass a "water quality" bill backed by agricultural groups in 2017. But the Iowa Farm Bureau and its allies spent the interim chipping away at the GOP holdouts. The bill sailed through the House early in the 2018 session. The same scenario could play out with any of the proposals discussed below.

None of the fifteen Republican bills targeting LGBTQ Iowans made it past the Iowa legislature's first "funnel" deadline in early March. But Reynolds surprised many statehouse watchers in both parties when she declared on Fox News a few weeks ago that she wanted to sign a bill banning transgender youth from competing on sports teams not matching their gender assigned at birth.

The governor sounded very committed to this goal at a news conference in early May, and advocates braced for a last-minute amendment to some appropriations bill, like the attack on trans Iowans near the end of the 2019 session.

No such legislative language emerged this week, indicating that Republican leaders in the House or Senate didn't have the votes to push this through. LGBTQ Iowans worked hard to persuade GOP lawmakers not to go there. Business lobbyists may have helped, knowing that this kind of legislation can only hurt Iowa's economy and workforce development.

LATE UPDATE: Business lobbyists barely lifted a finger when Reynolds pushed for this bill in 2022. The governor signed a discriminatory transgender sports bill into law at a celebratory public press conference.

Early in the session, House and Senate Republicans moved bills through committee that would have reduced unemployment benefits in three ways:

None of those ideas are new; Republicans attempted to pass them in 2019, but didn't have the votes to get a bill through the House.

The lobbyist declarations on this year's bills had me worried. Although a broad coalition of labor, religious, and advocacy organizations opposed the unemployment cuts, groups with a lot of pull in GOP circles were registered in favor: the Iowa Association of Business and Industry, the Iowa Chamber Alliance and some local chamber groups, the National Federation of Independent Business, and Associated Business and Contractors of Iowa. House and Senate leaders never brought the bills to the floor, though.

Reynolds announced earlier this month that that she will soon unilaterally reduce unemployment payments for tens of thousands of Iowans. Business groups applauded the move, but count on them to be back next year asking Republicans to take more money out of jobless people's pockets.

LATE UPDATE: Reynolds highlighted a more draconian version of this proposal in her 2022 Condition of the State address. While it took some time for House and Senate Republicans to agree on the fine points, the governor signed a bill that cut unemployment benefits in several ways.

Iowa Senate Republicans have been itching for years to establish programs that would reduce the number of Iowans receiving Medicaid, food assistance, and other benefits. House Republicans kept burying the proposals in the Human Resources Committee. But as Bleeding Heartland reported last month, Reynolds quietly endorsed State Senator Jason Schultz's plan, which helped revive the language in the health and human services budget.

A proposed new asset test set a very low threshold, which could result in about 50,000 Iowans losing eligibility for the federal Supplemental Nutrition Assistance Program (SNAP, formerly known as food stamps). Thousands more would likely be kicked off the rolls for Medicaid and other programs. Dozens of organizations lobbied against this idea, and only four entities supported it, representing conservative groups or businesses that could profit from the plan.

Somehow, House Republican negotiators managed to keep this language out of the final human services budget. I would welcome tips on what they might have given up in return.

Iowa has relatively low medical malpractice premiums, and Republicans tilted the playing field toward physicians by enacting a medical liability bill in 2017, the first year of the GOP trifecta. But some medical groups have continued to push for more limits on lawsuits against physicians who make mistakes. They made some headway last year, as this post on the American Academy of Orthopaedic Surgeons website explained.

In 2020, Iowa advocates were successful with the passage of SF 2338, which capped noneconomic damages at $750,000. The Iowa Senate approved the bill with a resounding 30–20 vote. (Only 26 votes are needed for passage in the Senate.) With a slim 53-vote margin in the House of Representatives, practicing attorneys in the House Republican caucus were able to prevent the necessary 51 votes for passage. The House Democrat caucus, despite having members open to consideration, closed ranks and organized each of its 47 members in opposition to the bill, forcing the Republicans to consolidate support or risk losing the necessary votes for passage. Unfortunately, they were unable to get the 51 votes needed in the Iowa House, and the issue was tabled.

The proposal came back this year in companion bills that Republicans voted out of committees in February and March (see here and here). With six more Republicans now serving in the state House, I thought GOP leaders would easily get this bill to the governor. The lobbyist declarations were terrifying: numerous medical associations, hospital groups, insurance companies, the Iowa Association of Business and Industry, and conservative groups Americans for Prosperity and Iowans for Tax Relief were lined up in favor.

Only a few entities representing attorneys were registered against the bills: the Iowa Association for Justice, Iowa Academy of Trial Lawyers, and Iowa State Bar Association.

Nevertheless, the tort reform measures sat on the daily debate calendar for weeks, never coming to the House or Senate floor.

Jim Carney, a bar association lobbyist, laid out a succinct case against the bills:

We are linking here a copy of Medical Economics (see page 17) which shows that Iowa has the eighth lowest medical malpractice insurance premiums in the country. There are only about 14 to 15 medical malpractice cases tried each year, and of those that are tried to verdict, the defense wins 90 to 95 percent of the cases. Civil filings are down. You have to ask what is the problem here in Iowa? Cap bills of this kind have been ruled unconstitutional in approximately 13 states. Article 1, Section 9 of the Iowa Constitution holds jury verdicts to be inviolate.

The pressure on GOP lawmakers must have been immense. But somehow, House leaders weren't able to find 51 votes in a 59-member caucus for this bill. A conservative website paraphrased Republican State Representative Brian Lohse, who is an attorney, as saying "it’s not the role of the legislature to decide a limit on monetary damages a jury can award."

Of all the bills that failed to pass in 2021, this one surprised me the most. Companion bills that cleared House and Senate committees would "cap recoveries at $1 million for non-economic damages in commercial motor vehicle cases." The legislation would also shield trucking companies from liability for "negligence in hiring, training, supervising, or trusting an employee" whose harmful conduct prompted a lawsuit.

Again, the lobbyist declarations showed only a few legal associations opposing the bills. Their main argument was that legislators cannot constitutionally restrict the role of juries to award damages. Lohse noted that "the court system already has procedures in place that allow the judge or appellate courts to determine that the jury has 'run afoul of what the evidence said.'” Lohse and another Iowa House Republican who is an attorney, Jon Jacobsen, took the very unusual step of voting against this bill in the House Commerce Committee. (Jacobsen had been taken off a subcommittee considering an earlier version of the legislation.)

The coalition supporting the measure included major trucking companies, insurance companies, the Associated General Contractors of Iowa, and the same business and conservative groups that backed the medical malpractice bills. Some trucking companies are led by major donors to Iowa Republican candidates and committees, such as John Smith of CRST International. (Former employees have sued that company over sexual harassment, discrimination, and retaliation. According to one court filing, “Sexual assaults of female CRST drivers are so pervasive that others in the trucking industry joke that the acronym, which stands for Cedar Rapids Steel Transport, also stands for 'Constantly Raping Student Truckers.'”)

I figured leadership would pull out all the stops to pass this bill. On April 13, House Majority Leader Matt Windschitl announced he was bringing House File 772 to the floor and offered a "time certain" motion, limiting how long the bill could be debated. Republican leaders only use that procedural tool when they expect a contentious, drawn-out battle.

The something strange happened, unlike anything I've seen in the fourteen years I've closely followed the Iowa legislature. Right after approving the time certain motion, Republicans went to caucus for a little more than an hour. When the House resumed session, Windschitl withdrew the time certain motion. He didn't bring the trucking bill to the floor that day, or any other day.

For weeks, I've been waiting for GOP lawmakers to sneak this language into a budget amendment. But the gift to the trucking industry never came back before adjournment.

Count on Windschitl and House Speaker Pat Grassley taking another shot at passing this bill in 2022.

LATE UPDATE: A heavy-handed effort to force this through in March 2022 led to a rare defeat for the majority on the Iowa House floor. A lawsuit filed around the same time illustrated how broad immunity for trucking companies could impact ordinary Iowans.