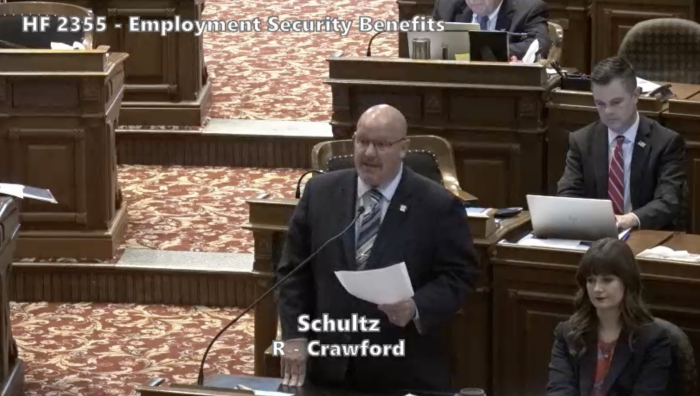 Iowa House and Senate Republicans have been at an impasse this month, as Senate Republicans refused to advance spending bills in an effort to pressure the House to approve a plan to divert more public education funds to private schools.

But in a sign of progress in backroom negotiations, GOP lawmakers finalized agreements on three bills April 26. The Senate approved the House version of a bill cutting unemployment benefits, while the House passed Senate versions of legislation on child care and an ethanol mandate for gasoline retailers.

Republicans in both chambers had agreed on most of the unemployment benefits package in March. The centerpiece of House File 2355 is a proposal Governor Kim Reynolds highlighted during her Condition of the State address in January: reduce the maximum unemployment benefits in one year from 26 weeks to sixteen weeks. The nonpartisan Legislative Services Agency (LSA) estimated the shortened window would reduce payments to jobless Iowans by nearly $69.2 million during fiscal year 2023 and nearly $70.9 million the following year.

Most states provide up to 26 weeks of unemployment benefits, while only a few provide as little as Iowa will after Reynolds signs this bill into law.

The only area where House and Senate Republicans disagreed was on a one-week waiting period to begin collecting jobless benefits. According to the LSA's fiscal note, that provision would have reduced benefits paid by $23.3 million during fiscal year 2023 and nearly $23.9 million the following year. That's because most claimants go back to work before exhausting their eligibility for unemployment benefits.

House members removed the waiting period from the bill before passing it in March. Senate Republicans restored the language the same day.

During House debate on April 26, Republican State Representative Mike Bousselot asked colleagues to concur in the Senate amendment, noting that 43 other states, including all those surrounding Iowa, have a one-week waiting period. He added that the United Auto Workers impose a one-week waiting period for strike benefits. (That was relevant last year when thousands of John Deere employees went on strike in Iowa.)

A voice vote was resounding in rejecting the motion to concur.

Later the same day, State Senator Jason Schultz brought House File 2355 to the floor in the upper chamber. Senators unanimously approved his motion to recede from the Senate amendment, then passed the bill on a party-line vote. (Republicans Zach Nunn and Jeff Reichman had opposed the bill in March, when it included the one-week waiting period, but voted for the House version of the legislation.)

Bleeding Heartland discussed the bill's other provisions in more detail here. The most important would:

Schultz described the bill as a “tremendous win for the workforce in Iowa,” adding,

For Iowans who are unemployed, I believe they’re going to get into a job faster… The closer you are to the job market from being just recently laid off, the more employable and more your mindset is to get back into the workforce.

Katie Akin of Iowa Capital Dispatch paraphrased Bousselot as saying House members stuck with their version of the bill because "the waiting period would harm construction workers, many of whom expect a few weeks of unemployment every year." The Des Moines Register's Stephen Gruber-Miller and Ian Richardson quoted Schultz as saying, “You don’t always get everything you want, and we just decided that we would let the House have this one."

Iowa workers deserve better than a Republican-controlled government that does nothing to improve the lives of working families and instead stoops to a new low. They are making it harder for workers to support their families even after factory shutdowns and layoffs. They cannot solve the workforce crisis by treating our workers like public enemies.

In a news release from the governor's office, Reynolds asserted that House File 2355 and Senate File 2383, which also won final legislative approval on April 26, "will help bolster our workforce in Iowa."

I've worked tirelessly to find ways to reinvigorate our workforce and make it more attractive for recruitment and retention of workers. With more than 85,000 job openings in our state, we cannot afford to leave any employable Iowans on the sidelines.

We’ve realigned our state’s workforce agency to serve as a reemployment agency providing more dedicated, one-on-one career coaching, and to make the process for Iowans to reenter the workforce as simple and efficient as possible. We want to ensure that every employable Iowan finds a meaningful and fulfilling job within our state.

The bill removes some inspection requirements for manufactured housing; introduces reporting requirements for workforce learning programs; updates a loan forgiveness program for rural doctors; and waives some fees for veterans.

The omnibus bill cleared the Senate unanimously in early April, but was approved in the House by 70 votes to 24, with all the opposition coming from Democrats.