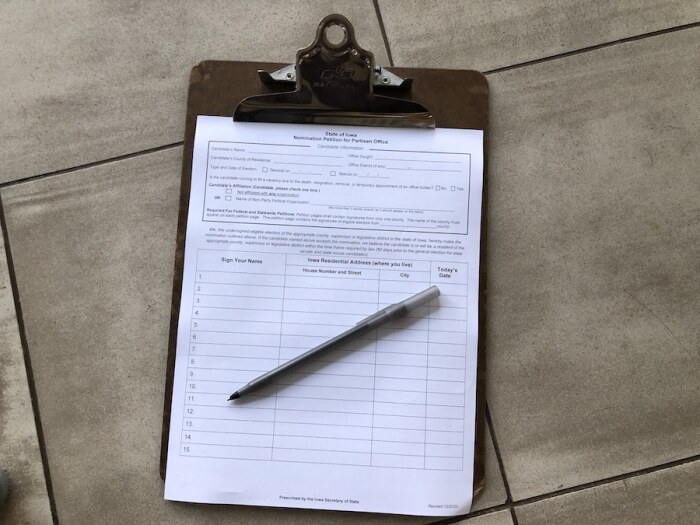 Iowa's third-party candidates have more time to qualify for ballot

Iowa candidates not affiliated with the Republican or Democratic parties will have until August 26 to qualify for the general election ballot, under a recent federal court ruling.

A law enacted in 2019 required third-party and independent candidates to submit nominating papers by the same mid-March filing deadline that applies to Democratic or Republican primary election candidates. But Chief U.S. Magistrate Judge Helen Adams ruled the law unconstitutional earlier this month, saying the early deadline “imposes a substantial burden” on the Libertarian Party of Iowa’s rights under the First and Fourteenth Amendments to the U.S. Constitution.

Whereas major parties are allowed to nominate candidates after the June primaries, the law forced "non-party political organizations" or independent candidates to collect signatures during the winter months. They also had to recruit all of their candidates “well before the political landscape is fleshed out, before the primary elections in June, before the Political Party candidates are solidified and finalized, before the current election issues are fully developed, and before voters are truly engaged in the election process,” the court determined.

Bleeding Heartland's review of recent candidate filings indicated that fewer third-party candidates seeking state or federal offices qualified for the ballot after the 2019 law went into effect. No independent candidates filed for statewide or federal offices before this year's March filing deadline. The Libertarian Party of Iowa fielded a ticket for governor and lieutenant governor, but no candidates for other statewide offices or for U.S. House or Senate.

A brief the state submitted to the federal court this week acknowledged that since the March deadline has been declared unconstitutional, "the filing deadline that existed prior to the 2019 amendments remains in force." Under that version of the code section, independent or third-party candidates running for state or federal offices must submit nominating papers to the Iowa Secretary of State's office "not more than ninety-nine days nor later than 5:00 p.m. on the seventy-third day before the date of the general election to be held in November."

By my calculation, that sets this year's filing window from August 1 through August 26. (Communications staff for the Secretary of State's office did not respond to an inquiry.)

In an April 22 order, the U.S. District Court declined to permanently enjoin the law that established an early filing deadline for third-party candidates. Adams noted that an injunction was unnecessary, since the Libertarian Party plaintiffs "will be subject to the filing deadline that existed prior to the unconstitutional amendment—that being the August deadline."

Third-party or independent candidates will still need to meet higher signature thresholds, which Iowa lawmakers enacted in 2021. But they will have another four months to collect signatures, an easier task when warmer weather facilitates more door-to-door canvassing and tabling at public events.

Prospective candidates can download the Secretary of State's official nomination petition here. All fields near the top of the page must be filled out before voters sign, and all signatures on any given page must come from eligible voters who live in the same county.

Candidates can create their own forms, as long as all of the required information is included on each petition page.

It's too late for Iowa's major-party candidates to qualify for the November ballot by collecting signatures. But Democrats and Republicans can hold special conventions after June 7 to select nominees for any state or federal office where no candidate from that party competed in the primary.