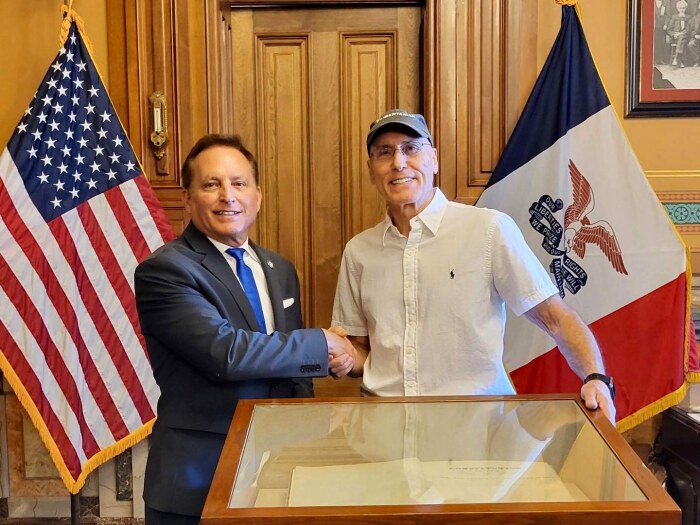 According to the general election candidate list published by the Iowa Secretary of State's office on March 21, only one minor-party candidate qualified for a federal office this year: Bryan Jack Holder, who is running in the fourth Congressional district. Libertarians are fielding candidates for governor and lieutenant governor: Rick Stewart and Marco Battaglia. In 2018, Libertarian candidates were on the ballot for all of Iowa's statewide and federal offices.

Only two candidates not representing a major party filed for any of the the 34 Iowa Senate seats on the ballot in 2022; both are running in Senate district 17. Across the 100 Iowa House races, only three Libertarian candidates and four independents will appear on the November ballot.

Before Republicans passed new restrictions in 2019 and 2021, Iowa voters were able to choose candidates not representing either major party in more elections.

Iowa Republicans had occasionally grumbled about third-party candidates. In 2010, votes cast for two little-known independents received in the first Congressional district exceeded U.S. Representative Bruce Braley's margin of victory over his Republican challenger. But the GOP didn't have full control of state government until 2017. The first big election law enacted under the Republican trifecta focused on other matters, in particular voter ID and cuts to early voting options.

Targeting third-party candidates became a higher priority for Republicans after the 2018 election cycle. Two-term U.S. Representative David Young lost to Democratic challenger Cindy Axne in the third Congressional district by 7,709 votes, while the four third-party or independent candidates who had qualified for the ballot received a combined total of more than 12,000 votes. Also in the 2018 election, a Libertarian candidate nearly cost Republicans an Iowa House seat in Council Bluffs.

A wide-ranging 2019 election law required all Iowa candidates to submit nominating papers and signature petitions by the same March deadline that applies to Republicans and Democrats competing in primaries. In the past, minor-party candidates often filed over the summer for Iowa House or Senate districts left uncontested by either the Democratic or Republican Party. Now Iowans can't see which seats will be uncompetitive before deciding whether to run for the legislature.

The Libertarian Party of Iowa filed suit in federal court in August 2019, saying the early filing deadline was unconstitutional. I thought they had a strong case, based on past federal court rulings including a 1983 U.S. Supreme Court decision that struck down a March deadline for presidential candidates to qualify for the ballot in Ohio.

The one area of ballot access law in which the U.S. Supreme Court has always been favorable to minor party and independent candidates is the qualification deadline issue. The U.S. Supreme Court has never upheld any early petition deadline, and in Anderson v Celebrezze, 460 US 780 (1983) showed that early deadlines are unconstitutional all by themselves, even when the number of signatures is low. [...]

The basis for Anderson v Celebrezze is U.S. history. Time after time, the voters have formed new parties, or decided to support independent candidates, after it was clear whom the major parties were nominating. Voters must be given a chance to support someone new if they believe the two major parties are going to disappoint them.

Consistent with those precedents, in March 2021 a Sixth Circuit Court of Appeals panel affirmed a lower court ruling that had struck down some barriers to third-party ballot access in Michigan.

Republican lawmakers and attorneys for the state have claimed Iowa's 2019 law treats third-party candidates the same as Democrats or Republicans. That's false, since the major parties remained able to nominate candidates for any state or federal offices over the summer, if no one had competed for the party's nomination in the primary. They also retained the option to nominate a different candidate if the winner of the party's primary withdrew over the summer—an option Republicans exercised in two important Iowa Senate races during the summer of 2018.

Third-party and independent candidates have no such path to the November ballot. Many candidates have decided to run in the past when they saw who won the Democratic and Republican nominations, or when they realized one of the major parties had left an office uncontested.

State attorneys have also claimed the law reduces administrative burdens, since the Secretary of State’s office has to manage just one three-week filing period instead of two. But they may still need to process nominating papers submitted by Republican or Democratic candidates after the primary election.

Robert Bastress, the attorney representing Iowa Libertarians in the federal lawsuit, told Bleeding Heartland during a March 18 telephone interview that the presiding judge has not yet ruled on the 2019 lawsuit. I find that astounding, given that the plaintiffs and attorneys for the state submitted their cross motions for summary judgment in March 2021 (see here and here). Courts should expedite election cases, especially where the laws being challenged limit voting rights or voter choices.

In the absence of any federal court action, Iowa's early filing deadline remains in effect for a second election cycle since Reynolds signed the 2019 bill into law.

Republicans compounded the difficulty for minor-party candidates in 2021, when another election law substantially increased the signature requirements for candidates seeking state and federal offices. Candidates for president, governor and lieutenant governor, and U.S. Senate must now collect at least 3,500 signatures, including at least 100 signatures in at least nineteen counties. The previous law required 1,500 signatures for those offices, with residents of at least ten counties represented on the petitions.

Candidates for U.S. House now need at least 1,726 signatures, including at least 47 from at least half of the counties in the district.

Candidates for other statewide offices previously needed 1,500 signatures but now must gather at least 2,500 signatures, including at least 77 from at least eighteen counties.

That's a high bar to clear for candidates who lack the infrastructure of a major party. Democratic or Republican candidates can lean on county central committees or other volunteers to help them meet the requirements.

In addition, the March filing deadline forced contenders to get most of their petitions signed during the winter, rather than giving them the entire spring and summer, as would have been possible under state law prior to 2019. Iowa candidates cannot collect signatures electronically; eligible voters must sign the petitions in person. The Omicron wave of the COVID-19 pandemic didn't make it easy for candidates to go out and collect signatures.

Finally, the 2021 law made it more difficult for minor parties to nominate candidates through district or statewide conventions by increasing the number of eligible voters who must attend those events.

A review of Iowa elections over the last decade shows that Republicans mostly accomplished their goal of keeping third-party candidates off the ballot.

In 2010, one independent candidate filed for U.S. Senate in Iowa. Seven independents were on the ballot in Iowa's U.S. House races: two in the first Congressional district, two in IA-02, one in IA-03, one in IA-04, and one in IA-05. As mentioned above, the two little-known independents in IA-01 received more votes combined than the Democratic winner's margin over his GOP challenger.

A Libertarian ticket and three other tickets for governor and lieutenant governor qualified for the ballot, and a Libertarian ran for secretary of state.

As for state legislative races, one independent was on the ballot for an Iowa Senate race, and two Libertarians, one Green, and four independents campaigned for Iowa House seats.

In the 2012 presidential election year, six minor-party tickets were on the Iowa ballot for president and vice president, including Libertarian and Green slates.

The 2018 election was the high-water mark for the Libertarian Party of Iowa, which had achieved major-party status after their presidential ticket exceeded 2 percent of the statewide vote in 2016. For that reason, it was easier for Libertarians to nominate candidates at a statewide convention.

Libertarians fielded candidates in all four U.S. House districts. One other independent candidate qualified in IA-02, one did in IA-04, and three did in IA-03. As mentioned above, minor-party candidates received more votes in the third district than Axne's margin of victory.

Libertarians and one other minor-party ticket qualified for the ballot for governor and lieutenant governor. Libertarians also had candidates on the ballot for secretary of state, state auditor, state treasurer, secretary of agriculture, and attorney general. Since Republicans didn't nominate an attorney general candidate in 2018, the Libertarian was Iowa voters' only alternative to long-serving incumbent Tom Miller.

The 2020 election cycle was the first after Republicans moved up the filing deadline for third-party candidates. Libertarians were of course aware of that fact, having filed suit to challenge the new law. However, that change to Iowa Code received very little attention, so I would guess many people who might have considered running for office as an independent had no idea they would no longer be able to submit nominating papers over the summer.

An additional problem for Libertarians was that they lost major-party status after their nominee for governor fell short of 2 percent in the 2018 election. Consequently, they couldn't easily nominate candidates at a statewide convention.

The early deadline doesn't apply to presidential tickets, so Libertarians and six other minor-party slates for president and vice president appeared on Iowa's November 2020 ballot.

But the new law's impact on other races was noticeable. A Libertarian and one independent qualified as U.S. Senate candidates. Libertarian Bryan Jack Holder did qualify in the third Congressional district, but he was the only U.S. House nominee in Iowa who was not a Democrat or Republican. Holder received more than 15,000 votes in a race Axne won by 6,208 votes.

For the first time since 2008, Iowa's U.S. Senate race will feature only the Republican and Democratic nominees.

For the first time since 1990, an Iowa governor's race will feature only three tickets.

Major-party candidates will be the only options in three of the four U.S. House races, which are the most competitive. Bryan Jack Holder filed as a "Liberty Caucus" candidate in IA-04, which is generally considered safe for Republicans.

Voters living in 33 of the 34 Iowa Senate districts on the ballot this year will have only Democratic and/or Republican options. The other Iowa Senate race will have a Libertarian and an independent candidate along with the Democratic nominee. Only three of the 100 Iowa House races will feature Libertarian candidates, while four independents will compete for state House districts.

Unless a federal court strikes down the early filing deadline for third-party candidates, future Iowa elections are likely to remain largely two-party affairs.

UPDATE: A reader questioned why I attributed the early filing deadline to Republican lawmakers when the final version of the 2019 bill passed both chambers unanimously.

It's a fair point. But Republicans drafted the 2019 bill. Democrats never attempted to pass an early filing deadline when they controlled the Iowa House or Senate. They voted for the revised bill in 2019 because most of the disenfranchising provisions pushed by State Senator Roby Smith and approved by Senate Republicans (which would have curtailed absentee voting in several ways and increased signature requirements) were cut in late-session negotiations.

Top image: Iowa Secretary of State Paul Pate (left) and Rick Stewart, Libertarian candidate for governor in March 1 photo. Stewart and his running mate are the only third-party candidates who will appear on the November ballot for statewide offices. Photo originally published on Stewart's political Facebook page.