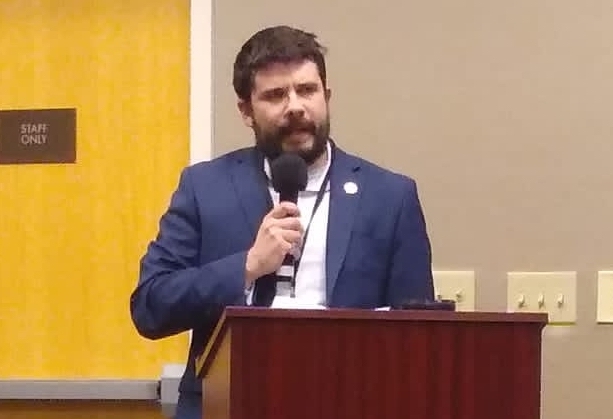 A federal judge has ruled that Iowa's early filing deadline for third-party candidates "imposes a substantial burden" on the Libertarian Party of Iowa's rights under the First and Fourteenth Amendments to the U.S. Constitution.

Iowa legislators changed the state's election law in 2019 to require independent candidates or those affiliated with a non-party political organization (like the Libertarian or Green Party) to file nominating papers for state or federal offices by mid-March, the same deadline as for Democrats and Republicans running in primaries.

The Libertarian Party and Jake Porter, the party's 2018 nominee for governor, filed suit in 2019, saying the change put “heavy burdens” on third parties, and the adverse treatment served no legitimate state interest.

Helen Adams, chief magistrate judge for the U.S. District Court for the Southern District of Iowa, ruled on April 8 that Iowa's legal framework places third parties "at a disadvantage" compared to the major parties, and the state's "articulated interest in effective and equitable administration of election laws" did not justify those burdens.

"UNCONTROVERTED" EVIDENCE OF A "SUBSTANTIAL BURDEN"

The court order cites case law including U.S. Supreme Court rulings from 1983 and 1992, which established a framework for determining whether state election laws violate constitutional rights. A rule imposing a "severe" burden will be upheld only if it is “narrowly drawn to advance a state interest of compelling importance," whereas a "minimally burdensome" rule may be justified if it is reasonable and not discriminatory.

The court found testimony about the "substantial burden" facing minor parties under Iowa's new law was "uncontroverted." The March filing deadline forces organizations to select candidates early in the year, when it is harder to collect signatures due to winter weather, and when "the political landscape has not been fully developed."

In contrast, Republicans and Democrats can nominate candidates by convention after the June primary election, as long as they submit valid nominating papers by a date in late August.

Secretary of State Paul Pate, the defendant in the lawsuit, contended that the March deadline placed a "minimal" burden on organizations, because Iowa has relatively low signature thresholds. But that argument "ignores a critical point" of the Libertarian challenge, the judge found. Third parties are forced to nominate candidates "well before the political landscape is fleshed out, before the primary elections in June, before the Political Party candidates are solidified and finalized, before the current election issues are fully developed, and before voters are truly engaged in the election process."

The court determined, "These burdens are compounded because the political landscape and election issues can change dramatically after mid-March and after the Political Party candidates are selected during the primary elections held in June."

Bleeding Heartland's review of independent and third-party candidacies over the last seven election cycles showed that the early filing deadline shrank the field of candidates who qualified for Iowa's general election ballot in 2020 and 2022, especially for statewide and federal offices.

After establishing that Iowa Libertarians suffer a "substantial" injury under the new law, the judge considered "whether the challenged statutory language is narrowly drawn to serve a compelling interest." Pate's sole argument to justify the new law "was the promotion of uniformity of one filing deadline, which allows the Secretary of State’s office to review the candidate filings in one period (March) rather than two (March and August)."

The Court, however, finds and concludes that the challenged statutory language is not narrowly drawn to serve that interest for the following reasons. The undisputed testimony establishes that the Secretary of State’s office had raised no concern that the previous August deadline hampered their ability to effectively administer the election laws. The Secretary of State did not request the earlier deadline and had not experienced problems with the August deadline. Joint App. at 14-15. Furthermore, the March deadline did not result in only one processing period as the Secretary of State’s office still needs the August review period to process the Political Party candidates nominated during the major party conventions, although those petitions required a shorter processing time. [...]

This record is devoid of any factual support that suggests that the August filing deadline impeded the State of Iowa’s ability to administer its election laws effectively and equitably, thus necessitating an earlier deadline.

For those reasons, the judge concluded the early filing deadline "does not pass muster" under the balancing test established by the U.S. Supreme Court. "Accordingly, the Court finds and concludes that Iowa Code § 44.4 and § 45.4 are unconstitutional in violation of Porter’s and ILP’s rights under the First and Fourteenth Amendments."

The court has not yet granted injunctive relief; Adams ordered both sides to file briefs on that issue by April 20.

The obvious solution would be to return to Iowa's pre-2019 framework, which allowed independent and third-party candidates to file papers during the same late-summer window Republicans and Democrats can use to nominate candidates for various offices. If that happens, Iowa voters may have more options for statewide and federal offices where only major-party candidates qualified for this year's ballot in March.

UPDATE: In an April 22 order, the judge confirmed that the earlier law (prior to 2019) remains in effect. So third-party and independent candidates will have until late August to qualify for Iowa's general election ballot.

Top image: Jake Porter, a former Libertarian candidate for secretary of state and governor, in a photo originally published on his Facebook page.