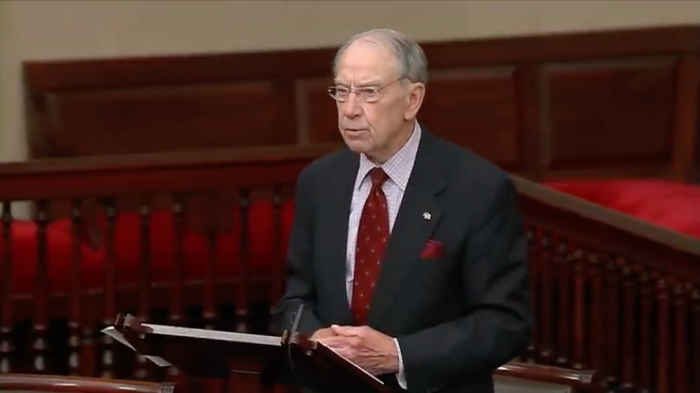 The Russian Federation's Foreign Ministry announced on May 21 that it was expanding the list of U.S. citizens who are permanently banned from entering Russia.

In addition to President Joe Biden, Vice President Kamala Harris, and other Biden administration officials, Russia has sanctioned hundreds of members of Congress. All four Iowans who serve in the U.S. House were on the initial sanctions list, which Russia released last month. The expanded "stop list" also includes U.S. Senator Joni Ernst, who welcomed the news.

Iowa's senior Senator Chuck Grassley is absent from Russia's updated list. His communications staff did not respond to Bleeding Heartland's inquiry about the matter.

A TIRELESS CRITIC OF THE TRUMP/RUSSIA INVESTIGATION

Grassley was a frequent critic of special counsel Robert Mueller's investigation of Donald Trump's 2016 campaign and its connections to Russian interests. He has slammed the federal government's prosecution of Trump's former national security adviser Michael Flynn for lying to the FBI. Flynn lied to federal agents about his conversations with Russia's ambassador to the U.S. in late 2016. A longtime Grassley staffer on the Judiciary Committee, Barbara Ledeen, was among those Flynn contacted for help in finding Hillary Clinton's alleged missing emails, the Mueller report found.

The special counsel was appointed soon after Trump fired FBI Director James Comey in May 2017, in what was widely seen as an attempt to derail the bureau's investigation into Russian interference in the 2016 election. Grassley defended Comey's dismissal in public comments at the time.

In remarks on the Senate floor in 2020, which Bleeding Heartland published here, Grassley argued that Comey had abused his power and asserted, "The Russia investigation is a textbook example of what not to do."

Trump said of Grassley at an October 2021 rally in Des Moines, "He was with us all the way, every time I needed something. [...] He's tough. But when I needed him, he was always there."

For years, Grassley also helped advance a narrative that Ukraine interfered in the 2016 presidential election, in order to help Clinton. U.S. intelligence officials have characterized that idea as part of a Russian disinformation campaign.

Other GOP senators not banned from entering Russia include Senate Majority Leader Mitch McConnell and Senator Rand Paul, who last week delayed passage of a $40 billion aid package for Ukraine.

Oddly, Senator Ron Johnson of Wisconsin is on Russia's new list of sanctioned Americans. Like Grassley, Johnson has pushed the Ukrainian election interference storyline. In late 2020, the two senators released a flawed report that sought to undermine the special counsel's Russia investigation.

Ernst said in a May 23 news release, “I consider getting sanctioned by an autocratic, murderous thug a pretty clear sign that I’m doing something right." She added, “Vladimir Putin’s lawless, unprovoked, and horrific war on Ukraine will be remembered by history as a despicable and unforgiving act. Putin can put my name at the top of his list.”

RUSSIA BANS TWO OTHER IOWANS FOR NO APPARENT REASON

Trish Mehaffey of the Cedar Rapids Gazette caught up with Grady over the weekend. He commented, “I wasn’t planning on going there anyway," and said, “That’s interesting and weird. I guess I’ll have to update my resume.” Grady has served as an Iowa District Court judge since 1995 and has never visited Russia.

Spies likewise seemed amused by his mysterious inclusion on the Russian Foreign Ministry's list. He told Bleeding Heartland via email on May 23,

I can’t think of any explanation that makes sense at this stage of my life. I was anti-Communist as a kid when nuclear annihilation was an everyday nightmare, but most everyone was. College cleansed me of that, and I figured it more likely I’d end up on some FBI watch list.

Either way, the Russians should expect retaliation. At the very least Putin should not expect an invitation to come to Iowa City.

Top image: Screenshot of Senator Chuck Grassley speaking on the Senate floor on May 11, 2020. Bleeding Heartland published the full text of those remarks (as prepared) here.