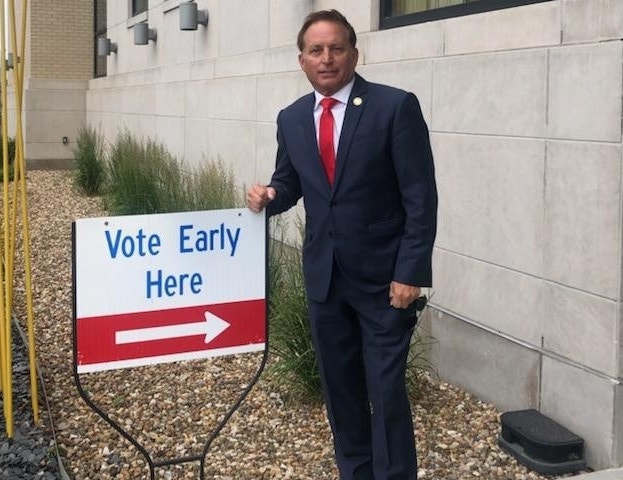 Secretary of State Paul Pate often uses the #BeAVoter hashtag and has repeatedly claimed that he works to make it "easy to vote and hard to cheat" in Iowa.

Since the June 7 primary election, Pate has spun the numbers as if they reflected a trend toward greater participation. In reality, this year's primary turnout was way down compared to 2020, when Pate genuinely tried to make it easier for Iowans to vote during a pandemic.

On June 8, Pate thanked Iowans "for making your voices heard!" by posting this graphic on his official Facebook page and Twitter feed. 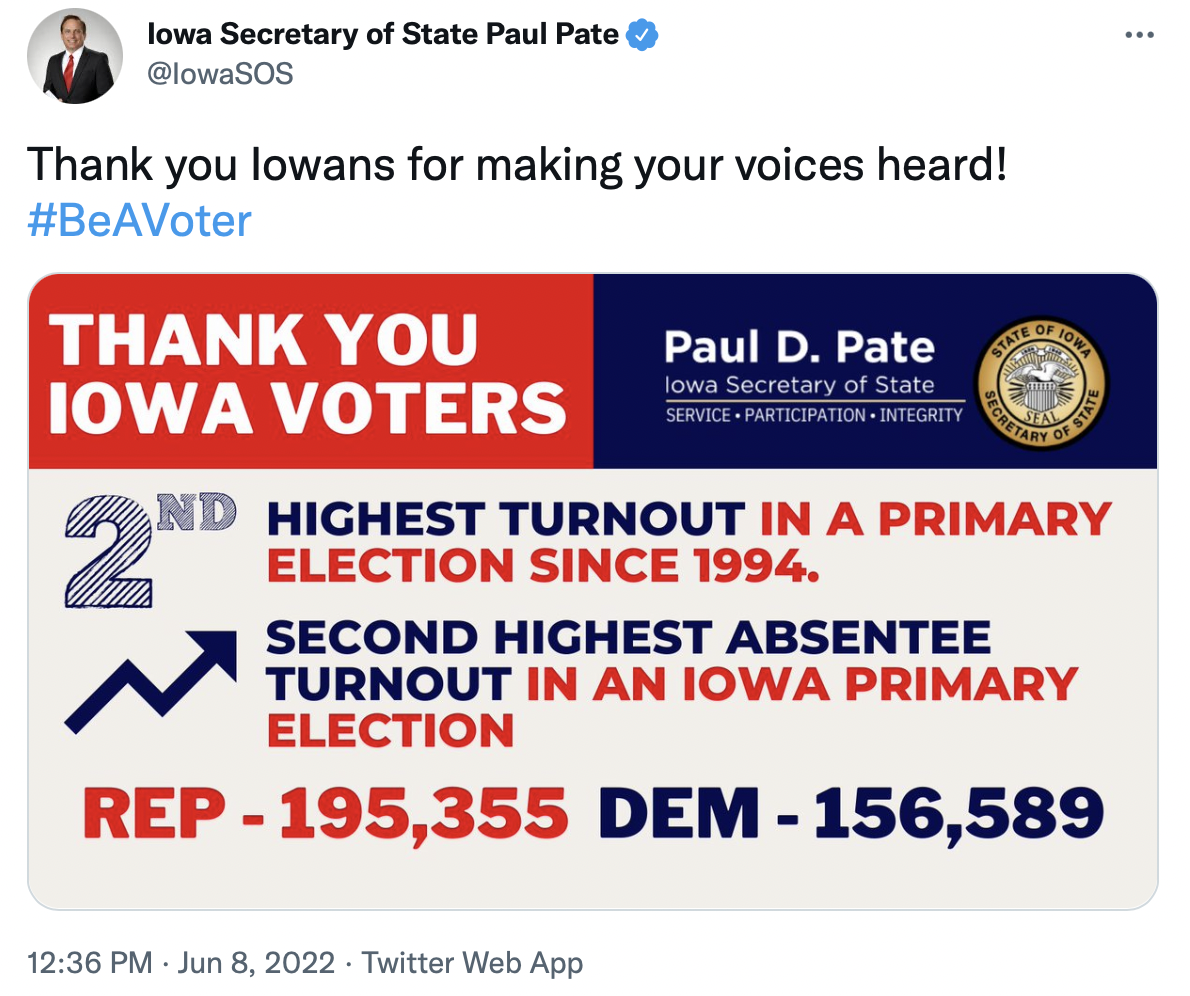 That sounds impressive: the second highest turnout since 1994, when Governor Terry Branstad narrowly survived a primary challenge from then U.S. Representative Fred Grandy.

The arrow pointing upward leads the viewer to believe that absentee voting was up this year.

But consider that two years ago, 246,816 Iowans voted in the Republican primary, and 281,544 cast ballots in the Democratic primary, according to the statewide statistical report published by Pate's office.

This year's GOP turnout was driven in part by more than two dozen competitive primaries for legislative districts. Governor Kim Reynolds held get out the vote rallies around the state for some of her endorsed Iowa House candidates. Senator Chuck Grassley spent more than $460,000 on television, radio, and digital advertising urging people to support him in the U.S. Senate primary. (Senator Joni Ernst had no primary challenger in 2020.)

Despite unusually vigorous efforts by the governor and senior senator to juice turnout, Republican primary participation dropped by more than 51,000 voters, a more than 20 percent decline from 2020.

Democrats had many hard-fought primaries for legislative or county offices, fueling relatively high turnout in some counties. But the June 7 Democratic primary turnout of 156,589 wasn't even up to the 2018 turnout level (180,841), and was 44 percent lower than the record-breaking 2020 primary turnout of 281,544.

Why would Pate celebrate the second-highest primary turnout since 1994 while glossing over a massive decline since Iowans last had the opportunity to select major-party nominees?

He may not want to highlight barriers Republicans established in election laws adopted last year.

Pate played a big part in Iowa's record-breaking 2020 primary turnout. He extended the early voting period from 29 days to 40, and mailed absentee ballot request forms to every registered voter—with return postage paid. His office encouraged voting by mail to limit spread of COVID-19.

The response was overwhelming. Turnout broke Iowa's previous record for primary turnout, and roughly 80 percent of those who cast ballots did so by mail.

The result displeased Republicans, who returned to the capitol in June 2020 to complete their legislative work. The majority party quickly passed a bill requiring the secretary of state to seek permission from the Legislative Council for any emergency changes, such as extending early voting or mailing absentee ballot request forms to all voters.

This year, Pate put up lots of social media posts with the #BeAVoter hashtag. But he didn't ask state lawmakers for permission to make it easier for Iowans to cast a ballot in the primary.

A secretary of state who was committed to voter participation would have at least tried to repeat successful policies.

One concerned mostly with appearances would play the role of cheerleader, hoping Iowans would not notice that primary turnout collapsed despite many spirited contests for Democratic or Republican nominations.

UPDATE: University of Iowa law professor Derek Muller reminded me that Pate could not have sought permission for a universal absentee ballot request mailing this year, because Governor Reynolds let Iowa's public health emergency regarding the COVID-19 pandemic expire. That said, Pate could have lobbied Republican lawmakers not to restrict his ability to send such a mailing.

Alternatively, he could have acknowledged this week that while Iowa's primary election turnout wasn't bad, it could have been much better. He could have pledged that if re-elected, he would try to restore proven methods for boosting voter engagement.

Top image cropped from a photo posted on the Iowa Secretary of State's Facebook page on June 4.