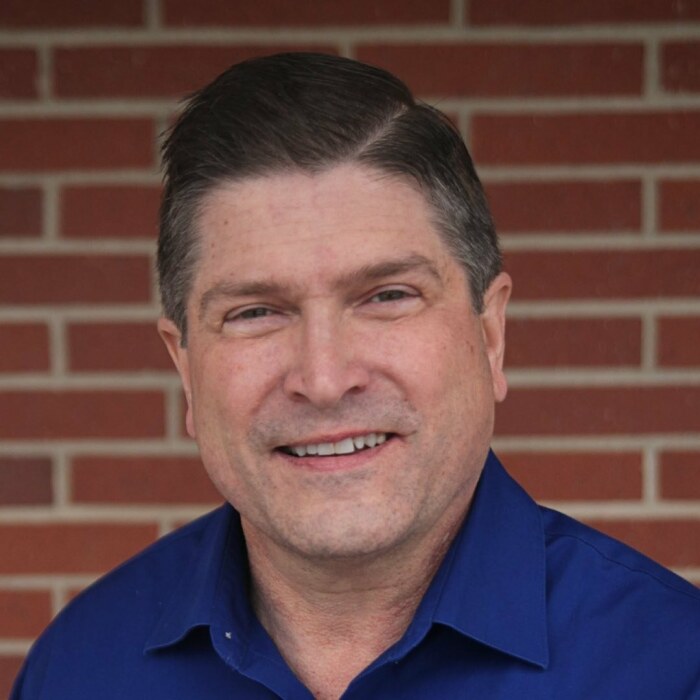 While Miller's home base was in a larger county, Van Lancker had raised and spent much more on the secretary of state campaign. His team had a paid consultant, purchased the Iowa Democratic Party's voter file, and began significant digital advertising two months before the primary. Van Lancker spent $5,863 on Facebook ads alone, making tens of thousands of impressions, according to Meta's ad library. In contrast, the majority of Miller's campaign spending went toward collecting enough signatures to qualify for the ballot.

I interviewed Miller about his victory on June 8 and reached out to engaged Democratic voters for insight on how they picked a candidate for this race.

"DEMOCRATS WANT A FIGHTER, AND THAT'S WHAT I AM"

Asked how he would explain his success, Miller told me he felt his message "connected better than his opponent's. "I think Democrats want a fighter, and that's what I am—fight the good fight, for the good cause, and I walk the talk."

About 20,000 Iowans who cast a ballot for one of the Democratic U.S. Senate contenders did not make a choice in the secretary of state race. Several who left that line blank told me they didn't have enough information to decide.

The most common explanation I heard was that after googling both candidates, Democrats were impressed Miller had been sued by Donald Trump's campaign in 2020, after he and two other county auditors mailed absentee ballot request forms with voters' information mostly filled in.

Several people mentioned reading this profile of both secretary of state candidates, created for the Des Moines Register and published in other Gannett/Gatehouse newspapers, such as the Iowa City Press-Citizen. Here's how the candidates answered the first question:

What distinguishes you from your primary opponent?

Miller: I was sued by former President Donald Trump for trying to keep voters and election officials safe during a pandemic. My opponent was not sued because he did not mail out pre-filled absentee ballot request forms. The purpose of Trump’s lawsuit was to create chaos and confusion with Linn County’s voters and to suppress voter turnout. The opposite occurred:  Linn County set a new record for voter turnout with 79.64% of registered voters voting in the 2020 general election.

Van Lancker: I represent both a rural county demographically and a red county politically. I’m able to build better relationships and understand the majority of county auditors better because we have similar issues and that’s why so many county auditors in blue and red counties have endorsed my campaign. And for primary voters looking for a Democrat to win in November, I’ve won reelection twice on the same ballot former President Donald Trump won in my county.

I did hear from some Democratic voters who preferred Van Lancker because they thought Miller might be too combative or polarizing, due to these conflicts. But more told me they wanted a candidate willing to take the fight to Republicans, and not talking up their support from both sides.

A CNN story by Kelly Mena, published on June 6, was headlined, "He was sued by Trump in 2020. Now he's running to be Iowa's next secretary of state." The article mentioned Van Lancker in passing but focused mainly on Miller's candidacy and quoted him repeatedly. For instance: "I'm mad as hell about what's going on. This is about fighting something that's just not right. I cannot stand to sit by and think that somebody else can fight a better fight against this than me."

Miller didn't need to spend money to get those messages in front of voters. He benefited from what people could access through their home computers or mobile devices.

In this video posted to his campaign website, Miller recapped several of his battles with Republican Secretary of State Paul Pate: over absentee ballot drop boxes and pre-filled absentee ballot request forms in 2020, and after Pate's staff wrongly inactivating thousands of registered voters in 2021. He also took Pate to task for standing by and doing nothing when Republican lawmakers pushed through many new voting restrictions.

Van Lancker talked about being an advocate for voters as well, and promised to make early voting easier in Iowa again. But as the primary approached, his messaging focused on his many endorsements from fellow county auditors and other well-known politicians, such as former U.S. Representative Dave Loebsack and former Lieutenant Governor Patty Judge. Here's one Facebook ad that appeared in early June. 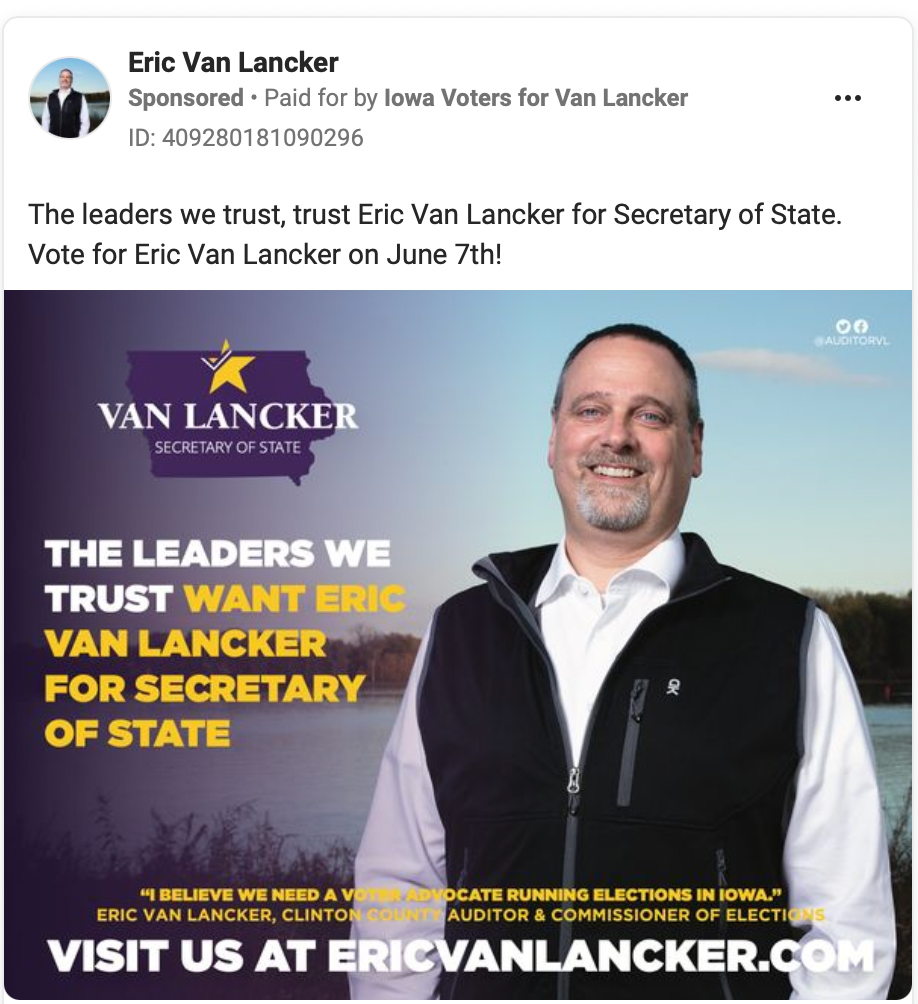 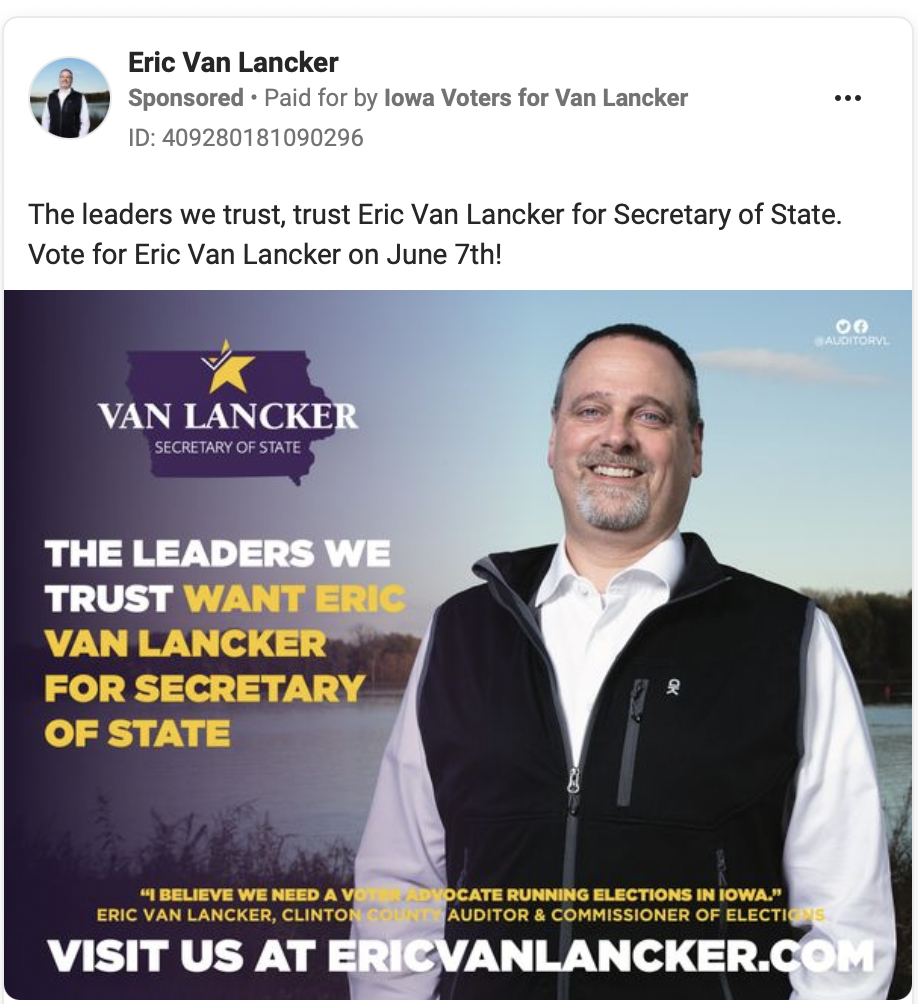 Some voters who picked Van Lancker told me they were influenced by the fact that leaders they respected supported him. But the message didn't resonate with as many Democrats across the state.

Miller told me his goal was to campaign in all Iowa counties. To date he's attended events in 42 counties, including many Democratic central committees. He visited larger counties (where the bulk of Democratic primary voters live) multiple times, speaking to various neighborhood groups in Polk County and to the "Potluck Insurgency" in Johnson County.

Miller said he tried to prioritize in-person events to which he was invited, because he heard many activists complain about Democratic candidates not showing up in their area, and a general lack of in-person events since before the COVID-19 pandemic. Although Zoom meetings can be nice "so you don't have to drive four hours," he said, "there's nothing like face-to-face contact to deliver a message."

Several voters I heard from last week mentioned that Miller had attended an in-person meeting or Zoom call for Democrats in their area. He also met many highly engaged people at the Polk County Democrats' dinner in late May.

The number of Iowans who met Miller at one of those events may have been only a small fraction of the Democratic primary electorate. But a lot of voters ask their activist friends whom they should support when they know little about the candidates for some office.

Two years ago, the Trump campaign and Republican Party organizations succeeded in stopping Miller and the Johnson and Woodbury Conuty auditors, who had mailed pre-filled absentee ballot request forms to voters in their counties. Their goal was to make the process more accessible. Miller also argued that pre-filling the forms would save his office a significant amount of staff time, as fewer forms would come back incomplete or with the wrong voter PIN. (Few voters know their PIN number, and some substitute a four-digit number they remember, such as their home address or the last four digits of their Social Security number.)

Two Iowa District Court judges found the mailings violated a directive Pate had issued, requiring request forms to be blank. The Iowa Supreme Court refused to hear an appeal of those rulings, and in a separate case, rejected a Democratic lawsuit claiming Pate lacked the authority to block county auditors from mailing such forms.

I asked Miller how he planned to address what will surely be a top GOP talking point against him: that he supposedly broke the law by trying to make it easy for voters to return absentee ballot request forms. "Let them bring it up. I feel vindicated," he said.

Miller noted that there was never a court hearing, much less a final ruling on a permanent injunction in the 2020 case. Rather, he and other auditors sent blank absentee ballot request forms after judges issued a temporary injunction on the forms they had mailed.

Moreover, critics never identified the state law he supposedly broke by sending the forms. As part of a wide-ranging election bill in 2021, Republican lawmakers made it illegal for county auditors to send universal mailings of absentee ballot request forms. Miller views that act as confirmation that previous Iowa law did not preclude his actions in 2020.

In his campaign video, Miller said of his request form mailings, "I was trying to keep voters safe and election workers safe."

Pate asked the Iowa Attorney General's office to open a consumer fraud investigation against Miller in 2020, claiming the pre-filled forms could have compromised Iowans' personal information. But Attorney General Tom Miller (no relation to the Linn County auditor) determined there was no basis for such a case.

UPDATE: I forgot to mention that the surname "Miller" was itself an advantage in the race. In addition to Democratic voters being familiar with the name through Tom Miller's long tenure as attorney, it is also the most common surname in Iowa, according to Tom Miller.