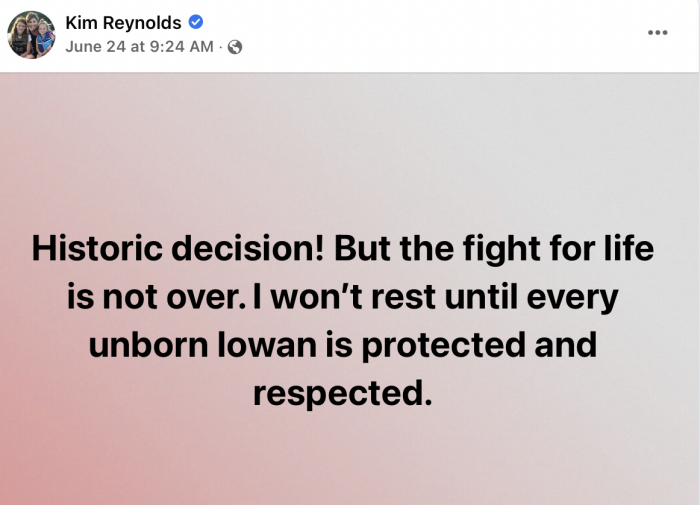 How far can Iowa Republicans go to ban abortion? (updated)

The worst-case scenario for bodily autonomy in Iowa played out over the past ten days. First, the Iowa Supreme Court on June 17 overturned its own 2018 precedent that established a fundamental right to abortion, protected by the state constitution. Then, the U.S. Supreme Court on June 24 overturned the 1973 Roe v Wade decision that established a federal constitutional right to an abortion, and the related Casey decision of 1992.

Top Iowa Republicans immediately promised further action to restrict abortion, which is now legal in Iowa up to 20 weeks of pregnancy. It's not yet clear when they will try to pass a new law, which exceptions (if any) may be on the table, or whether a ban modeled on other state laws could survive an Iowa court challenge.

"I WON'T REST UNTIL EVERY UNBORN IOWAN IS PROTECTED"

In 2018, Republican legislators approved and Governor Kim Reynolds signed a law that would have prohibited most abortions after any fetal cardiac activity could be detected (which often happens before people realize they are pregnant). That legislation, known to supporters as the "heartbeat bill" and to opponents as a "six-week ban," never went into effect. A Polk County District Court struck it down in early 2019, citing the Iowa Supreme Court precedent that is no longer operative.

It's unlikely Reynolds would settle for comparable legislation now. In a statement released on June 24, she hailed the U.S. Supreme Court ruling, adding that "the fight for life is not over. As governor, I won’t rest until every unborn Iowan is protected and respected."

Her spokesperson did not respond to an email seeking more details about how the governor envisions protecting "every unborn Iowan." Was the governor endorsing a total abortion ban with no exceptions for rape, incest, or the health of the pregnant person? How would Reynolds want a new state law to approach standard medical care for ectopic pregnancies or incomplete miscarriages? Would she try to make it a crime to travel to another state to have an abortion, or provide any form of assistance to someone seeking to terminate a pregnancy?

UPDATE: Reynolds announced on June 28 that she will try to have the 2018 law reinstated.

Iowa GOP legislative leaders likewise released written statements on June 24 praising the Supreme Court's decision. From Iowa Senate Majority Leader Jack Whitver: "As a pro-life caucus, Senate Republicans have led on the protection of life and will continue to do so. We look forward to continuing to advance the cause of the unborn.” From House Speaker Pat Grassley: "Iowa House Republicans will continue to protect the innocent lives of unborn children."

Communications staff for Whitver and Grassley did not reply to Bleeding Heartland's emails asking whether any of the following might be part of future legislation:

The governor's office and legislative leaders also didn't clarify whether they intend to call a special legislative session to pass some kind of abortion ban this summer or fall, or whether they will take up the matter when the legislature reconvenes in January 2023. Either course entails political risks.

UPDATE: Speaking to reporters on June 29, Reynolds said "right now it wouldn’t do any good to call a special session." She will wait and see how Iowa courts respond to her requests to rehear the case on a 24-hour waiting period and lift an injunction on the 2018 law banning most abortions. She dodged a question about her "ultimate goal" for abortion policy, saying, “Well, you know, we have the heartbeat bill on the books. So let’s lift the injunction, and let’s make that a law that it is. And so we’re going to start with that.”

To all appearances, Republicans have the votes to eliminate bodily autonomy for pregnant Iowans. They now enjoy large legislative majorities: 60-40 in the state House and 32-18 in the state Senate. Only three House Republicans voted last year against a state constitutional amendment designed to clear a path to ban abortion. Two of them (Lee Hein and David Maxwell) just lost their primary elections, and the third (Jane Bloomingdale) faced a strong challenge for the GOP nomination. That could deter anyone who might otherwise hesitate to go all in on an abortion ban.

I'm not aware of any Iowa Senate Republican who would vote against forcing Iowans to carry unintended pregnancies to term.

I anticipate Reynolds will call a special legislative session, because waiting until next year seems inconsistent with her promise not to "rest until every unborn Iowan is protected and respected." The conservative base may demand a rapid response to the new legal landscape.

But Republicans may not want to elevate the salience of this issue before the midterm election. A CBS News nationwide poll that was in the field on June 24 and 25 found 59 percent disapproved of the U.S. Supreme Court overturning Roe, while only 41 percent supported the decision. By a 52 percent to 31 percent margin, respondents said the decision was a "step backward" (not a step forward) for the country. Among women respondents, 56 percent said the ruling would make women's lives worse, while only 16 percent thought women's lives would get better.

I haven't seen any Iowa polling since the state and federal Supreme Courts reversed themselves on abortion rights. Past surveys have indicated most Iowans don't want to ban abortion. A September 2021 Iowa Poll by Selzer & Co for the Des Moines Register and Mediacom found that 57 percent of respondents (and 65 percent of those affiliated with neither party) agreed abortion should be legal in most or all cases. Only 38 percent said abortion should be illegal in most or all cases.

That poll sample was not skewed toward liberals; President Joe Biden's approval rating was just 31 percent (with 62 percent disapproval) in the same Selzer survey.

Similarly, Selzer's poll for the Des Moines Register and Mediacom found in March 2021 that only 31 percent of Iowa adults supported amending the state constitution "to say it does not recognize a right to abortion or require public funding of abortion," while 58 percent of respondents opposed that constitutional amendment.

Reynolds takes many incumbency advantages into her re-election campaign, but Selzer's most recent snapshot of the race showed the governor just 8 points ahead of her Democratic opponent Deidre DeJear (51 percent to 43 percent). The same poll indicated that Reynolds is a polarizing figure; most respondents who said they would vote for DeJear also said they didn't know enough about the Democrat to have an opinion about her.

DeJear denounced the Supreme Court ruling on June 24, as did top Democrats in the Iowa legislature and all the party's candidates for Congress.

Republicans are favored to maintain control of the Iowa House and Senate, but several of their legislative candidates (including Whitver and the second-ranking Senate Republican, Jake Chapman) are running in suburban districts where overturning Roe is probably unpopular.

Then again, an asymmetry in public opinion about abortion has long worked in Republicans' favor: more "single-issue" voters oppose abortion than support reproductive rights. So Reynolds and legislative leaders may bank on a special session energizing the conservative base more than it will mobilize Democrats or turn no-party voters against GOP candidates.

Whenever Republicans move to force Iowans to continue unwanted pregnancies, any new restrictions will certainly be challenged in court. Even after this month's developments, it's far from clear the Iowa Supreme Court would uphold a broad ban on abortion.

Justice Samuel Alito's majority opinion in Dobbs held that state laws regulating abortion "must be sustained if there is a rational basis on which the legislature could have thought that it would serve legitimate state interests." A total abortion ban could probably clear that low bar.

The Iowa Supreme Court's latest abortion decision left "abortion providers, the legislature, and lawyers and their clients in a state of confusion about the appropriate response," in the words of dissenting Chief Justice Susan Christensen. As Bleeding Heartland discussed in more detail here, five justices reversed the 2018 ruling that had protected abortion rights under the Iowa Constitution. But they could not agree on a new legal standard for evaluating abortion restrictions. Two justices (Matthew McDermott and Christopher McDonald) advocated for a rational basis standard. They may soon have company, as Reynolds will appoint a new justice next month.

The three other Iowa justices who joined the majority opinion (Edward Mansfield, Dana Oxley, and Thomas Waterman) may end up following the U.S. Supreme Court's lead. They held, "While we zealously guard our ability to interpret the Iowa Constitution independently of the Supreme Court’s interpretations of the Federal Constitution, the opinion (or opinions) in that case [Dobbs] may provide insights that we are currently lacking."

On the other hand, those three justices left the door open to maintaining some kind of balancing test. The majority opinion concluded by recognizing that “[a]utonomy and dominion over one’s body go to the very heart of what it means to be free,” and that “being a parent is a life-altering obligation that falls unevenly on women in our society.” It also acknowledged the state's "legitimate interest in protecting potential life before viability."

The Iowa Supreme Court temporarily established "the Casey undue burden test" applied in a 2015 case as "the governing standard" for abortion cases. That unanimous 2015 decision struck down a state rule prohibiting the use of telemedicine for abortion services.

If denying Iowans access to some medication abortions imposed an "undue burden" on abortion seekers, then a total or near-total ban would presumably be struck down as violating Iowans' bodily autonomy.

Republican legislators and Reynolds may be willing to gamble that the Iowa Supreme Court will uphold whatever limits on reproductive rights they enact. They may even receive private assurances about the court's intentions. (Waterman and Mansfield reportedly lobbied Iowa House Republicans to pass a judicial selection bill in 2019, and McDermott did extensive legal work for the Iowa GOP and state House Republicans when he was in private practice.)

Still, there is a non-zero chance that some kind of undue burden standard could remain in Iowa. One variable that could influence the court is a public vote on a constitutional amendment about abortion.

"WE THE PEOPLE OF THE STATE OF IOWA DECLARE..."

Iowa Republicans have been pushing a state constitutional amendment designed to overturn the Iowa Supreme Court's 2018 precedent. The legislature approved the proposal once in 2021. If the House and Senate pass identical language next year, the following amendment will go on a statewide ballot sometime in 2023 or 2024:

To defend the dignity of all human life and protect unborn children from efforts to expand abortion even to the point of birth, we the people of the State of Iowa declare that this Constitution does not recognize, grant, or secure a right to abortion or require the public funding of abortion.

The first clause was written to confuse Iowans about the goal. Republicans know most Iowans don't support banning abortion, so they are spinning the constitutional amendment as necessary to protect babies from (non-existent) "efforts to expand abortion even to the point of birth."

In her dissenting opinion joined by Justice Brent Appel, Chief Justice Christensen cited the proposed amendment as "perhaps the most important reason" the Supreme Court should refrain from overturning its abortion precedent: "If the majority truly wants to leave this issue to the will of the people, it should let the people have their say through the ongoing constitutional amendment process."

A decisive popular vote against this amendment would increase the prospect of the Iowa Supreme Court finding some state constitutional protection for bodily autonomy. Conversely, if Iowans vote to adopt the amendment, the justices may conclude the people have spoken and determined there is no state constitutional right to terminate a pregnancy under any circumstances.

I'll update this post as needed when GOP leaders announce their plans.