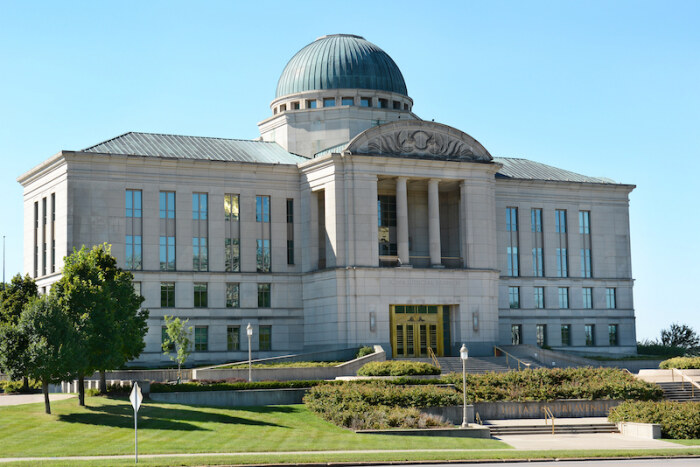 The State Judicial Nominating Commission will interview an unusually small number of applicants for the Iowa Supreme Court vacancy to be created when Justice Brent Appel reaches the mandatory retirement age next month.

Only five people—three judges and two attorneys in private practice—applied for the position, the Iowa Judicial Branch announced on June 20. The commission will interview Third Judicial District Chief Judge Patrick Tott, Ames attorney Timothy Gartin, Des Moines attorney William Miller, District Court Judge Alan Heavens, and Iowa Court of Appeals Judge David May on June 27. The commissioners will send three names to Governor Kim Reynolds, who will have 30 days to appoint the next justice from that short list.

WHY SO FEW APPLICANTS?

Why didn't more people step up this time? Some prospective candidates may have assumed they had no chance to make the short list, based on the backgrounds of those forwarded to Reynolds for the last four vacancies.

Another possible deterrent: within the central Iowa legal community, many suspect the current process is a done deal for May. Reynolds appointed him to the Iowa Court of Appeals in 2019. He has applied to the Supreme Court three times and was a finalist following the State Judicial Nominating Commission's March 2020 interviews. (At that time, the governor selected Matthew McDermott.)

Of the current applicants, all but Heavens have previously sought to serve on Iowa's highest court. Gartin, May, Miller, and Tott have all applied at least twice.

Only four women have ever served on the seven-member Iowa Supreme Court. Two are current members appointed by Reynolds: Chief Justice Susan Christensen, and Justice Dana Oxley. The gender balance won't change after Appel retires, because for the first time in more than a decade, all the applicants for an Iowa Supreme Court vacancy are men. (Fifteen women applied in 2018 and ten did in 2019.)

Justice Christopher McDonald, who describes his race and ethnicity as Vietnamese and white, is the only person of color ever appointed to the Iowa Supreme Court. That won't change next month either, because all five applicants are white.

Two current applicants live in Polk County (May and Miller). Gartin lives nearby in Story County and serves on the Ames City Council.

The other two contenders would bring more geographical balance to the high court. Heavens lives in Clayton County, where he served as county attorney and president of the county bar association before being appointed as a District Court judge in 2019. Tott has deep family roots in the Sioux City area.

Heavens mentioned on his application that no one from northeast Iowa has served on the Supreme Court since Zager took senior judge status. Heavens wrote that the State Judicial Nominating Commission and Reynolds may consider giving geographical diversity "additional importance if there are many qualified applicants but only a few who live in districts that don't have any representation on the Supreme Court."

Tott mentioned on his application that northwest Iowa has not been represented on the Supreme Court since Justice Daryl Hecht stepped down in 2018 when gravely ill with cancer. "Being a life-long resident of Sioux City and my family having been residents of Northwest Iowa for generations, I believe I can bring the perspectives of Northwest Iowa to the Court as well as give the citizens and members of the bar ready access to the Court."

McDermott now serves on the Supreme Court, and Bird is the Republican nominee for Iowa attorney general again, so it wouldn't make sense for her to apply for a judgeship now.

I was surprised that neither Langholz nor Ostergren put their names in, though. When Langholz moved from the governor's office to a senior role in the Attorney General's office in late 2020, he seemed to be bolstering his litigation experience with a view to applying for the Iowa Supreme Court again. There may not be another vacancy for several years.

Ostergren applied to serve on the Supreme Court three times in 2019 and 2020. Since resigning as Muscatine County attorney two years ago, he has represented Republican litigants in many high-profile cases, most recently the effort to disqualify U.S. Senate candidate Abby Finkenauer from the Democratic primary ballot. He is now president and chief counsel of the Kirkwood Institute, a "conservative public-interest law firm dedicating to promoting the rights of Iowans."

None of the five current applicants has a strongly partisan profile. Gartin was a Republican candidate for the Iowa Senate in 2010, but he holds a nonpartisan office now and has not campaigned for that office in a partisan manner. In fact, he said during his last re-election bid for the Ames City Council that he doesn't identify with a political party.

Tott presided over one politically charged case that received a lot of attention. In 2020, he ruled in favor of Donald Trump's campaign and other Republican plaintiffs, who were seeking to invalidate absentee ballot request forms that Woodbury County Auditor Pat Gill had mailed out with some of the voters' information filled in.

The State Judicial Nominating Commission gave Iowans between seven and thirteen days to submit comments on applicants for the last four Iowa Supreme Court vacancies. In contrast, the commission released the current list just three days before the deadline for public comments: 11:59 pm on June 23.

Commissioners have asked for feedback to be sent via email; addresses for all seventeen members (nine appointed by Reynolds, eight elected by Iowa attorneys) are available here.

The public can watch live-streams of the State Judicial Nominating Commission's interviews on the Iowa Courts YouTube channel June 27.