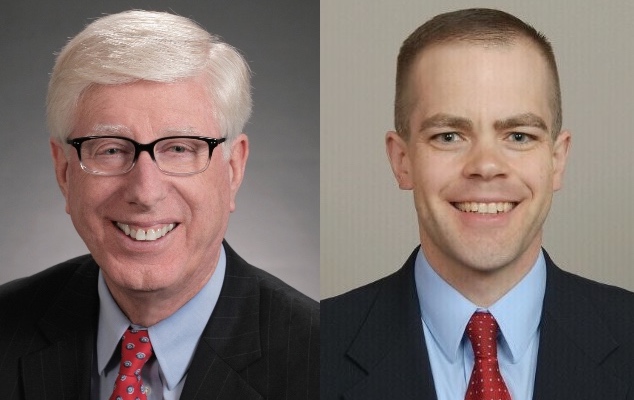 Governor Kim Reynolds has falsely accused Attorney General Tom Miller of playing “political games,” strong-armed him to cede part of his authority to her, and blocked him from joining dozens of multi-state legal actions.

Yet Miller just gave Reynolds’ senior legal counsel Sam Langholz a prestigious job that could one day help him obtain a coveted judgeship.

The governor’s office announced on November 12 that Langholz will move to a position in the Attorney General’s office at the end of the month.

“Sam is a brilliant legal mind and he was an instrumental part of my team. As senior legal counsel he brought unmatched talent and professionalism in service to the people of Iowa,” said Gov. Reynolds. “In this new role, Sam will apply his expertise and deep understanding of the law inside and outside the courtroom. I look forward to watching his career grow in the Iowa Attorney General’s Office.”

“We are excited to welcome Sam to our office. His legal knowledge and broad experience will be a real asset for us, and we’re fortunate that he wants to continue his work in public service,” Miller said. “He will work as an assistant attorney general focusing on civil litigation and appellate work. We believe he’s a top legal talent; he was first in his class at Iowa law school and he clerked for the Eighth Circuit, one level below the Supreme Court. He knows the law and will be a strong advocate for state government and Iowa taxpayers.”

During Governor Terry Branstad’s administration, Langholz served as Chief Administrative Law Judge of the Administrative Hearings Division of the Iowa Department of Inspections and Appeals and as the State Public Defender. He unsuccessfully applied for a Polk County District Court judgeship in 2018 and for the Iowa Supreme Court this year.

In his Iowa Supreme Court application, which described serving on the high court as “my dream job,” Langholz noted that he was the founding president of the Iowa Lawyers Chapter of the Federalist Society​, and continued in that role from 2009 to “the present.” A key goal of the Federalist Society is to stack courts at all levels with conservative judges. Group members have held numerous important legal positions in Republican administrations.

Langholz has led a team that mostly stopped complying with Iowa’s open records law in 2020. (Deputy legal counsel Michael Boal processes most records requests to the governor’s office but is surely not the decision maker on what journalists or members of the public receive.) Unlike past years, when the governor’s staff generally provided documents within a month or two, I now have multiple outstanding requests that are months old. One dates to late April, even though it would not require sifting through a huge volume of material. Another request submitted in mid-July was for records the governor’s office provided to other news organizations. Those should have been promptly supplied, since all of the compilation and legal review had already been completed. Neither Boal nor anyone else in the governor’s office has explained the refusal to provide records.

The governor’s staff slow-walked one request from the Cedar Rapids Gazette for more than four months before providing a single email.

Langholz’s supposed “professionalism” and “deep understanding of the law” don’t extend to respecting the principle of press freedom. Last year, the Institute for Free Speech sent Reynolds’ senior legal counsel a memo from a nationally renowned First Amendment attorney. He reviewed my credentialing problems and concluded that the policies of the legislature and governor’s office “suffer from serious constitutional deficiencies.” Langholz did not even acknowledge receipt of the letter, let alone accept the institute’s offer to help revise the policy.

Langholz posted on Facebook and LinkedIn on November 12 that he looked forward to working with “the great team in the Iowa AG’s office.”

I consider myself fortunate to live in a state with bipartisan leaders who can set politics aside so that it’s possible for our Republican Governor’s lawyer to go work for our Democratic Attorney General.

If Iowa really had “bipartisan leaders who can set politics aside,” Reynolds would not have demanded control over a core function of Miller’s job. No other attorney general in the country has to work under such constraints. Several Republican attorneys general from other states urged Reynolds last year not to limit Miller’s “independent legal authority.”

Over the past eighteen months, Langholz has helped ensure that Reynolds did not allow Miller to join a single legal effort that went against GOP political preferences or Trump administration policies.

Democrats giving Republicans everything they want is not bipartisanship.

This new job could be a valuable stepping stone for Langholz. Lack of experience with big cases was a notable weakness in his resume, compared to those whom Reynolds appointed to the Supreme Court this year (Dana Oxley and Matthew McDermott). A few years of arguing appeals before the Iowa Supreme Court and the Eighth Circuit would position Langholz well for the next time he applies for a judicial vacancy–perhaps as soon as 2022, when Justice Brent Appel will reach the mandatory retirement age. Langholz helped vet several Reynolds appointees to the State Judicial Nominating Commission, which sends her short lists of candidates for the Supreme Court.

What Miller gets out of this arrangement is not clear. Any number of talented and bright attorneys could represent the state in court, without having promoted a conservative takeover of Iowa’s judiciary or interfered with Miller’s own work.

Miller hasn’t said whether he intends to seek an eleventh (!) term. If he does, hiring Langholz looks like a good way to protect his right flank. Republicans didn’t field a candidate against Miller in 2018 but invested heavily in trying to remove him in 2010 and 2014. Perhaps adding Langholz to his team will discourage Reynolds from recruiting or promoting a GOP challenger in the 2022 attorney general race.

UPDATE: Eric Tabor, a longtime aide to the attorney general, informed Bleeding Heartland on November 13 that Miller “has not decided whether or not to run for reelection in 2022.”