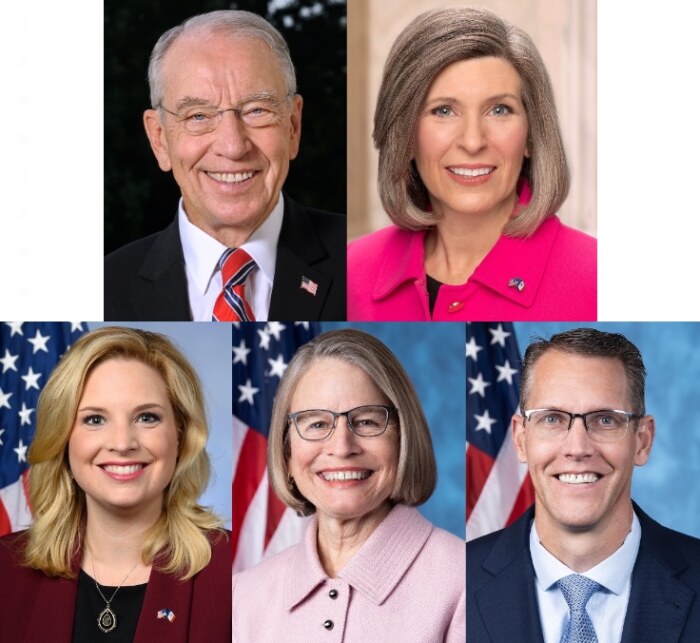 Iowa Republican politicians rarely question the actions of law enforcement officers in any context. But forced to choose between giving federal agents the benefit of the doubt and knee-jerk loyalty to former President Donald Trump, it wasn't a close call.

Trump broke the news on August 8 that FBI agents executed a search warrant on his Florida residence at Mar-a-Lago, going through his personal safe, among other areas.

Details about the search are scarce, but the investigation appears to be related to alleged mishandling of classified documents. Multiple news organizations reported on August 9 that agents took about a dozen boxes of material. Legal experts with relevant experience reviewed the federal criminal statutes that could apply to this kind of situation at the Just Security blog.

Early this year, the National Archives and Records Administration obtained fifteen boxes of presidential records and documents from Mar-a-Lago. Some of those files were reportedly classified.

"FBI MUST IMMEDIATELY EXPLAIN ITSELF"

Senator Chuck Grassley is the ranking Republican on the Senate Judiciary Committee, which has oversight over the Justice Department. His office released a statement on August 9 titled, "FBI Must Immediately Explain Itself After Years Of Politicization And Loss Of Public Trust." Excerpts:

“Less than a week ago, I expressed serious concern that what little remains of the FBI’s credibility is on the line following its inconsistent handling of politically sensitive investigations, failure to hold its own employees accountable for misconduct and consistent disregard for congressional oversight. Last night’s raid on the home of a former U.S. president without explanation will only further erode confidence in the FBI and the Justice Department.

“I reiterated these concerns to Director [Christopher] Wray today. If the FBI isn’t extraordinarily transparent about its justification for yesterday’s actions and committed to rooting out political bias that has infected their most sensitive investigations, they will have sealed their own fate. [...]

“The Justice Department as a whole bears responsibility in upholding the public trust, and in a matter so consequential to our democratic process, Attorney General [Merrick] Garland also owes the American people full transparency,” Grassley said.

In his trademark short-on-punctuation style, Grassley tweeted to more than 730,000 followers, "Transparency brings accountability & if the FBI & DOJ aren’t transparent about raiding a former presidents home they risk further damaging their credibility I’ve already raised issues from whistleblowers abt political bias in investigations so we’ve got a right 2b skeptical"

Many former prosecutors and legal commentators have noted that Trump could release both the search warrant (which would contain details about the crimes being investigated) and the inventory of items the FBI removed from his residence. At this writing, he has not done so.

Furthermore, former U.S. Attorney Barbara McQuade pointed out, "The law prohibits DOJ from discussing a search warrant that is under seal. Secrecy rules are designed to protect the person under investigation." So the kind of transparency Grassley demands may be illegal.

Nevertheless, other Iowa Republicans followed Grassley's lead. A couple of hours later on August 9, Senator Joni Ernst tweeted from her official account about the "totally unprecedented action by the DOJ and FBI — the same agencies who labeled parents domestic terrorists and sat on the sidelines while Justices were threatened and churches were vandalized. The American people deserve answers, now."

Representative Ashley Hinson similarly tweeted, "The Department of Justice must immediately explain their justification for this unprecedented raid. A Republican majority will provide rigorous oversight of the Biden Administration and ensure they are serving the American people, not targeting them."

Representative Randy Feenstra chimed in a short while later, tweeting that "Yesterday’s raid was an unprecedented escalation of the use of law enforcement against a former President. Our Justice system should be consistent, fair, and transparent. The FBI must immediately provide a full accounting of facts. The American people deserve answers."

Like many other GOP members of Congress, Ernst, Hinson, and Feenstra highlighted the "unprecedented" nature of the search. Indeed, a former U.S. president's residence has never been searched in connection with a criminal investigation. (Former heads of state in other democracies have been charged and convicted, which is consistent with the principle that no one is above the law.)

It's not as if FBI agents showed up at Mar-a-Lago on a whim without following standard procedures. A federal magistrate signed off on the warrant, which was almost certainly approved at the highest levels of the Justice Department. Federal judges don't sign search warrants unless they are convinced the authorities have good reason to believe there is evidence of a crime in the area to be searched.

Officials became suspicious that when Trump gave 15 boxes of items to the National Archives about seven months ago, either the former president or people close to him held on to key records — despite a Justice Department investigation into the handling of classified and other material that had been sent to the former president’s private club and residence in the waning days of his administration.

Over months of discussions about whether documents were still missing, some officials also came to suspect Trump’s representatives were not truthful at times, according to people familiar with the matter who spoke on the condition of anonymity to discuss an ongoing investigation.

Yes, the whole situation is unprecedented. Other Trump actions without precedent include divulging classified information to foreign officials in the Oval Office, delaying military aid to an ally in search of a political favor, refusing to acknowledge he lost an election, and leading a conspiracy to subvert the peaceful transfer of power after losing said election.

"FOCUS ON THE CRIMES HAPPENING AT OUR BORDER AND CITIES"

Ironically, the one Iowa Republican member of Congress who did not receive Trump's "Complete and Total Endorsement!" for this year's election came out most aggressively against the raid.

Tweeting from her political account on August 8, Representative Mariannette Miller-Meeks suggested that possible wrongdoing by Trump should not even be investigated. "It’s time for Washington to focus on the crimes happening at our border and cities, energy independence and not wasting taxpayer dollars investigating political rivals."

"Washington" isn't running the show here—the Justice Department is. There is zero evidence President Joe Biden or anyone in the White House influenced this investigation.

Trump appointed Wray to lead the FBI in 2017 (after firing James Comey for not burying the probe into Russian election interference). If Wray later became the president's "political rival," that's not due to any wrongdoing by the FBI director. On the contrary, Trump soured on Wray because under his leadership, the FBI was not pursuing criminal investigations against Trump's political adversaries (Comey and former deputy FBI Director Andrew McCabe).

Before the 2020 election, Wray undercut Trump's outlandish claims about mailed ballots when he testified before a Senate committee that the FBI had no evidence of a “coordinated national voter fraud effort.” He also angered Trump by telling a House committee that "antifa" was not a structured organization. Again, it's not Wray's fault if truthful testimony caused Trump to view the FBI director as an enemy.

Miller-Meeks tweeted again about the Mar-a-Lago search on August 8, endorsing a statement from a fellow House Republican. Representative Michael Guest demanded an "immediate Congressional inquiry" into the search and asserted, "This administration has failed to secure our borders and to stop out of control violent crime and has instead targeted the former President with their law enforcement resources."

It's rich for any Republican to complain about political targeting when mobs have chanted "Lock her up!" at Trump rallies for years.

It's rich for anyone who frequently boasts about supporting law enforcement to assume the worst about FBI officials when their party's cult figure is involved.

And it's especially rich for Grassley to point fingers about "the public trust" and "our democratic process" when he has been slavishly loyal to a man who did more to undermine both than any other American president.

UPDATE: Governor Kim Reynolds tweeted from her political account on August 9, "The Biden Administration is taking our nation down a dangerous path, unleashing the DOJ and FBI on parents, taxpayers, gun owners, and now on President Trump himself." She added, "The federal government is more focused on punishing working Americans than solving the border crisis, record inflation, and declining national security. It’s wrong and the American people deserve better!"

Grassley: FBI Must Immediately Explain Itself After Years Of Politicization And Loss Of Public Trust

“Less than a week ago, I expressed serious concern that what little remains of the FBI’s credibility is on the line following its inconsistent handling of politically sensitive investigations, failure to hold its own employees accountable for misconduct and consistent disregard for congressional oversight. Last night’s raid on the home of a former U.S. president without explanation will only further erode confidence in the FBI and the Justice Department.

“I reiterated these concerns to Director Wray today. If the FBI isn’t extraordinarily transparent about its justification for yesterday’s actions and committed to rooting out political bias that has infected their most sensitive investigations, they will have sealed their own fate. The FBI’s mission and the many patriotic agents who work hard to carry it out will be forever overshadowed by the distrust the bureau has sown.

“The Justice Department as a whole bears responsibility in upholding the public trust, and in a matter so consequential to our democratic process, Attorney General Garland also owes the American people full transparency,” Grassley said.