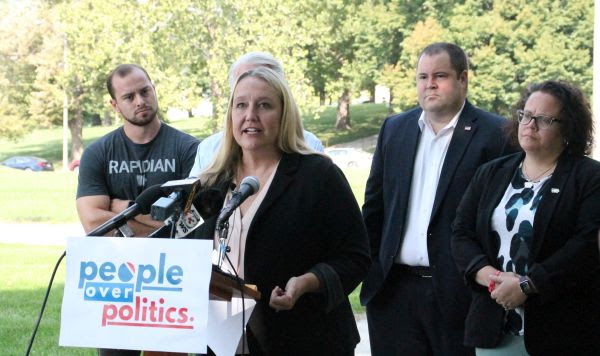 One of these things is not like the others.

Three parts of the Iowa House Democrats' "People over Politics" agenda will sound familiar to anyone who has followed legislative debates over the past decade. The minority party, which now holds 40 of the 100 House seats, will fight to raise wages and lower costs for essentials like housing and child care, protect reproductive freedom, and invest more resources in public schools.

The fourth part of the Democrats' campaign platform is new: for the first time, an Iowa legislative caucus advocates legalizing adult use of marijuana.

Announcing the Democratic agenda outside the capitol on September 14, Iowa House Minority Leader Jennifer Konfrst pointed to growing public support for legalizing marijuana. A majority of Iowa adults favor the move, according to statewide polls Selzer & Co conducted for the Des Moines Register in March 2020 and March 2021.

During an online news conference on September 15, Konfrst characterized the four-part agenda as advancing policies that have bipartisan support. "While others are having culture war battles and fighting over things that aren't really problems, Democrats are listening to what Iowans want, and we're responding because we want those things too."

Speaking about marijuana in particular, Konfrst said voters in rural, urban, and suburban Iowa are "asking for this policy," for several reasons. Many have safety concerns and believe state regulation would help keep safe a product Iowans are already using. (Marijuana laced with fentanyl has been linked to some overdoses around the country.)

Konfrst cited economic benefits as well. Tax revenue from marijuana sales would give the state more to spend on education, mental health, and other priorities.

Third, legalizing would free up resources now expended on prosecuting and incarcerating people for using a product that's legal a short distance away. Many Iowans regularly cross the Mississippi to buy cannabis products in Illinois. Residents of South Dakota and Missouri will vote this November on legalizing marijuana; if those ballot initiatives pass, Iowa would be at an even greater competitive disadvantage.

Finally, legalizing recreational marijuana would help more Iowans get relief for medical or health conditions, Konfrst said. (Iowa's current medical cannabis program permits only the use of cannabidiol, not smokeable products, and is limited to those diagnosed with certain health conditions.)

Some Iowa lawmakers have advocated decriminalizing or legalizing cannabis for years. But that's never been a consensus or official position of the House or Senate Democrats. For instance, only five state senators co-sponsored a 2017 bill to decriminalize possession of small amounts of marijuana. State Senator Joe Bolkcom was alone in introducing a similar bill in 2019.

Since the 2020 election, Democrats have introduced five bills that would eliminate criminal penalties for possessing small amounts of marijuana. Some had only one sponsor, such a House bill offered by State Representative Brian Meyer. Others had a handful of supporters sign on.

Republicans currently control Iowa's legislative agenda, and they have never given any of the Democratic bills on marijuana a subcommittee hearing, let alone a vote in the House or Senate.

During an online news conference on September 15, I asked Konfrst whether all 40 members of her caucus are on board with the marijuana policy, or whether this stance was added to the party's agenda through a majority or super-majority vote.

Konfrst said the caucus has been working on the issue for a long time, and has held several meetings on the topic, because it's important to some colleagues. "All members of our current caucus were part of that conversation."

House Democrats don't have a specific bill drafted, Konfrst said. "People approve legalization in different forms," but everyone agrees moving in that direction "gives us an opportunity to regulate it and make the product safer on the ground."

Konfrst has presented the policy to Democratic state House candidates, but they didn't vote on whether to add it to the agenda. "I will say this," she added. "Anyone who doesn't want to talk about it is ignoring the majority of Iowans, who believe this is an important issue." She's confident Democrats will get behind the idea.

U.S. Representative Cindy Axne, the lone Democrat in Iowa's Congressional delegation, voted in April for a bill that would decriminalize marijuana at the federal level. All three Republicans representing Iowa in the House voted against that bill, which has not been taken up in the Senate.

Mike Franken, the Democratic challenger to Senator Chuck Grassley, is on record for legalizing marijuana and regulating its use "much like we do with alcohol."

Appendix: Excerpt from a September 14 email blast from Jennifer Konfrst describing the "People over Politics" agenda

Lowering costs for Iowans: Too many Iowans are still struggling to make ends meet today. Their wages simply aren’t keeping up with the rising costs of healthcare, food, child care, and utility bills. We need to make housing and child care affordable, raise wages, and lower taxes for working families instead of more handouts to big corporations.

Investing in public schools: For generations, Iowans have counted on our great public schools to educate our kids and be the heart of our communities large and small. But we’ve lost ground and our public school kids are losing out and teachers are leaving the classroom.  We must fully fund public schools to keep up with rising costs and make sure every kid, in every zip code gets a great education. We also need to raise pay for educators, give them a seat at the table, and stop the Governor’s private school voucher plan to ensure public money is used to help public schools.