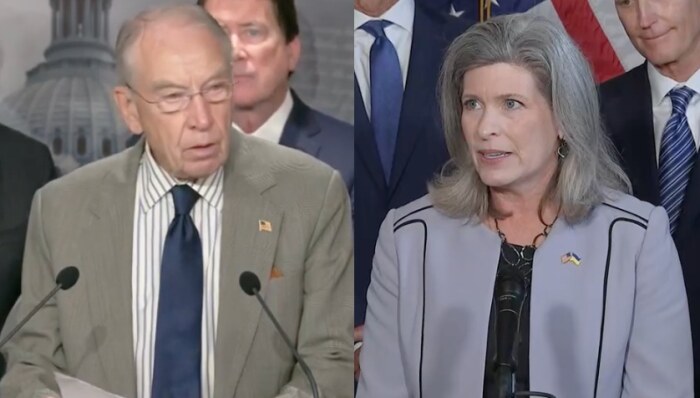 Republican members of the U.S. House and Senate introduced companion bills this week that would ban abortion nationally after 15 weeks, with few exceptions.

The three Republicans representing Iowa in the lower chamber—Ashley Hinson (IA-01), Mariannette Miller-Meeks (IA-02), and Randy Feenstra (IA-04)—all co-sponsored the national abortion ban on the day the bill was introduced.

U.S. Senators Chuck Grassley and Joni Ernst dodged questions about whether they would support their colleague's bill. And leading Iowa news organizations gave them exactly the coverage they wanted.

WHAT THE NEW PROPOSAL WOULD DO

The legislation introduced by Senator Lindsey Graham and Representative Christopher Smith would not prohibit red states from going further to ban abortion, but would override state laws that currently permit abortions beyond 15 weeks.

Although sponsors touted its supposed exceptions for rape, incest, and the life of the mother, those are written narrowly and would exclude many victims of sexual assault.

Crucially, the bill contains no exception for severe or non-survivable fetal anomalies, which are often found through an ultrasound that occurs around 19 or 20 weeks. Its exception for abortions “necessary to save the life of a pregnant woman" would not cover many situations where women are at risk of developing life-threatening infections or other complications.

The new legislation would have blocked abortions for all five of the women Bleeding Heartland interviewed after Iowa enacted a 20-week abortion ban in 2017. None of them could have given birth to a baby with any potential to survive.

The harsh criminal penalties proposed for doctors ensure that health care professionals would err on the side of refusing to perform an emergency abortion. Women with non-viable pregnancies are already living through this nightmare in Texas, where a strict abortion ban is in effect (see here and here).

GRASSLEY NOT PRESSED FOR ANSWER

Grassley's staff do not allow me to participate in his regular conference calls with some Iowa reporters. The Des Moines Register's write-up of his latest call on September 14 was headlined, "Here's what Sen. Chuck Grassley thinks about a proposed nationwide 15-week abortion ban." The piece led with the best possible frame for the senator.

Republican U.S. Sen. Chuck Grassley said he believes decisions on limiting abortion should remain with the states, even as one of his Senate colleagues has proposed banning the procedure nationally after 15 weeks.

Several paragraphs down, reporter Ian Richardson acknowledged that Grassley "did not directly say whether he would support" Graham's bill.

"Finally after 50 years, this issue has been returned to the states so the voters can have a voice through their elected representatives at the state level, and not by unelected judges," Grassley said Wednesday. "So this is a state issue."

The Cedar Rapids Gazette's article by Tom Barton and Caleb McCullogh took the same approach. Here's the lede to the piece that appeared under the headline, "Iowa’s Republican U.S. senators shy away from proposed national abortion ban":

Iowa’s Republican U.S. senators shied away from supporting a proposed nationwide ban on abortions when asked about that possibility Wednesday.

As Grassley's Democratic challenger Mike Franken pointed out, Grassley has been on record for nearly five decades supporting a federal constitutional amendment to ban abortion. Why is the Des Moines Register purporting to tell readers that a non-committal statement in a conference call reflects what the senator now "thinks"?

It's only been a few years since Grassley and Ernst said the Senate should not confirm a U.S. Supreme Court nominee during a presidential election year. Yet both voted to confirm Amy Coney Barrett eight days before the 2020 election, when some 65 million Americans had already voted.

Five years ago, Grassley and Ernst said they would oppose bills that threatened health insurance coverage for people with pre-existing conditions. But when Republican leaders brought three such bills to the Senate floor in 2017, Iowa's senators voted for every one of them.

Admittedly, the format of Grassley's telephone calls makes it difficult for journalists to follow up on a question, because the senator's staff control access to the microphone.

Regardless, no one should be reporting what Grassley "prefers" without getting a clear answer to a simple question: would he vote against a national abortion ban if one reaches the Senate floor?

For months, Ernst's staff have ignored all of Bleeding Heartland's inquiries about abortion regulations. I circled back several times after Caroline Kitchener reported for the Washington Post in May that Ernst plans to introduce a nationwide six-week abortion ban in the next Congress, "according to an antiabortion advocate with knowledge of the discussions who spoke on the condition of anonymity to discuss internal strategy."

During a September 14 conference call with some reporters, WHO-TV's Dave Price asked about the new abortion bill. Ernst said only, "Iowans know that I am proudly pro-life" before moving on to the next subject.

Ernst's staff didn't reply to my follow-up questions, but did send a non-responsive answer to the Des Moines Register.

Kelsi Daniell, a spokesperson for U.S. Sen. Joni Ernst, said in an email Wednesday that "as Iowans know, Sen. Ernst is adamantly pro-life and has said states should be part of these ongoing discussions."

Andrew Solender reported for Axios in Washington that Ernst told journalists there, "We really should let the states take that initial role."

None of the above means Ernst would vote against a national abortion ban. Why is the Cedar Rapids Gazette leading readers to believe she is reluctant to support a bill like Graham's (or a more restrictive one) in the next Congress?

I can't think of any time Grassley or Ernst voted against any policy bill Republican leaders brought to the floor. Given that record, and their longstanding support for banning abortion, Iowa media should not be taking their supposed preference for state action at face value—especially since there has been credible reporting that Ernst plans to introduce a federal abortion ban herself.

A clear, on-the-record promise to vote against any national ban would be newsworthy. But Iowa journalists shouldn't reward senators for evasive generalities.