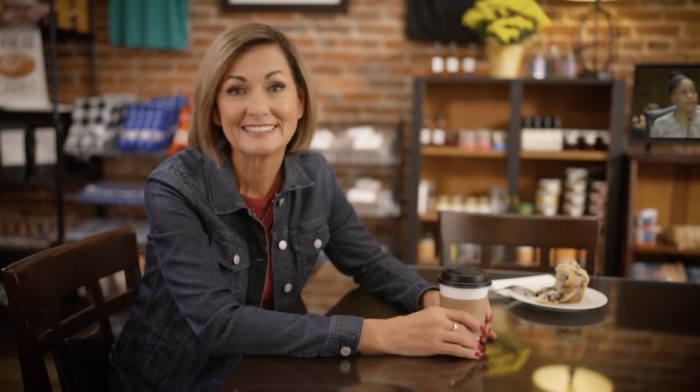 Governor Kim Reynolds' re-election campaign continues to air a television commercial that plays on racist tropes in order to boost the governor among the largely white Iowa electorate.

Reynolds' campaign spokesperson Pat Garrett has not replied to Bleeding Heartland's inquiries about the commercial. But after Iowa Democratic Party chair Ross Wilburn denounced the ad as "a cheap, racist and dangerous stunt using harmful stereotypes to score political points,” Garrett told some other reporters that the spot "contrasts the failed policies supported by liberal Democrats across the country with the common sense leadership of Gov. Reynolds."

A SECOND BLACK WOMAN WITH NO CONNECTION TO IOWA

Here's the video of "Still Works," for those who haven't seen it yet.

Bleeding Heartland has already highlighted several ways in which the script and visuals reinforce negative stereotypes about Black and brown people. Notably, the ad opens with footage of U.S. Representative Cori Bush of Missouri calling for "defunding the police."

Bush remains visible in the background as Reynolds says, "Watching the news, you wonder: has the rest of the country lost its mind?" 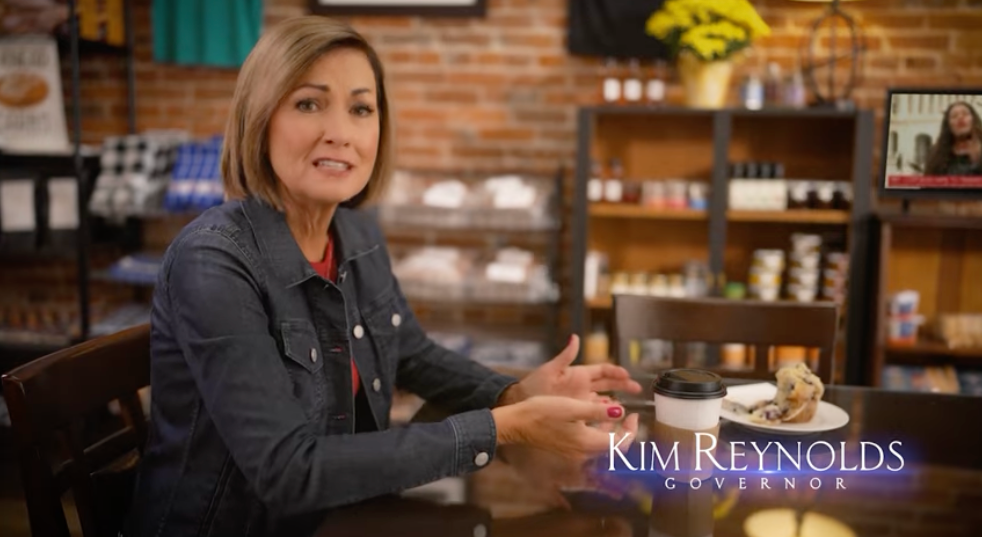 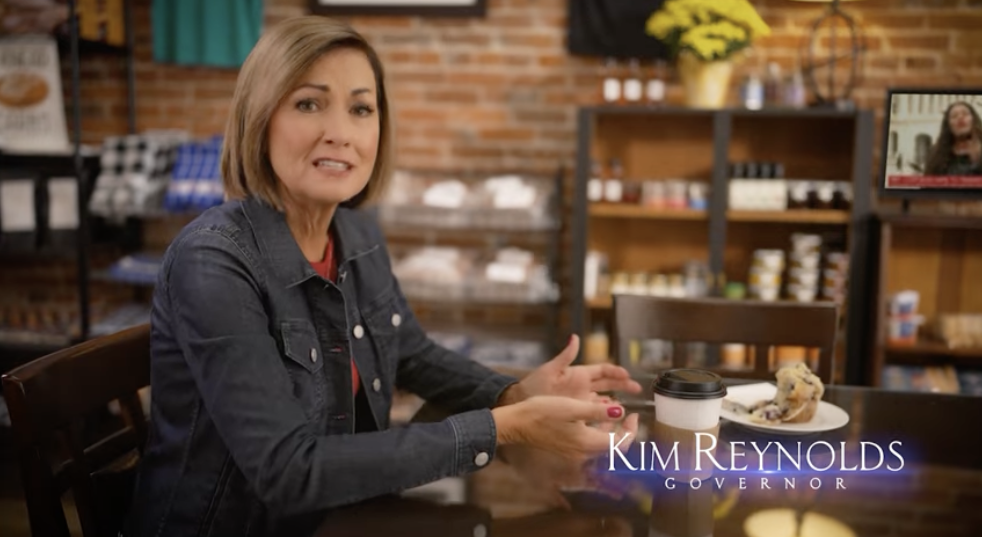 Several images follow that would predictably agitate white viewers (police car set on fire, a large group of immigrants, a graphic that reads FROM WORK TO WELFARE).

Just this weekend, I realized that when the camera returns to a smiling Reynolds ("Aren't you glad you live in Iowa?"), some other unnamed Black woman has replaced Cori Bush on the television in the background. I added the red oval to this screenshot, to make her face easier to see. 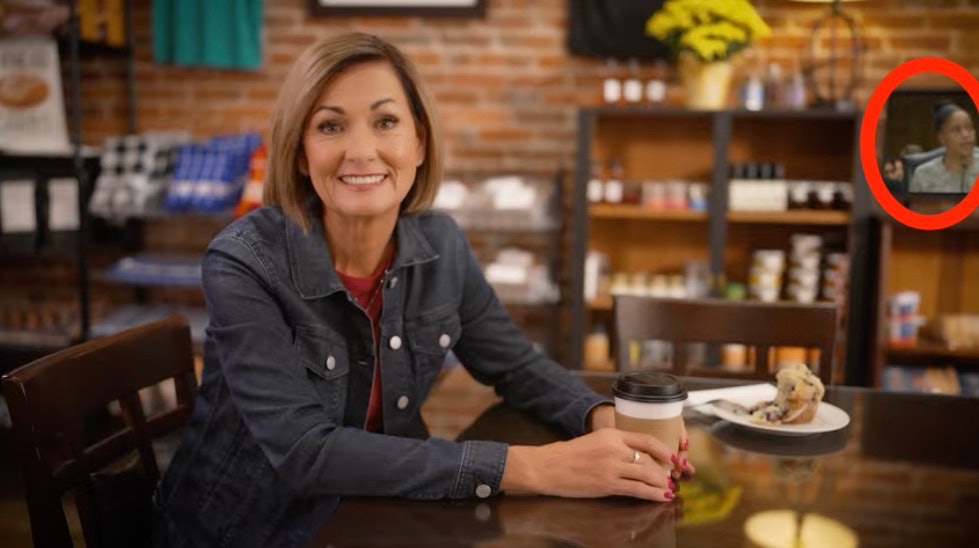 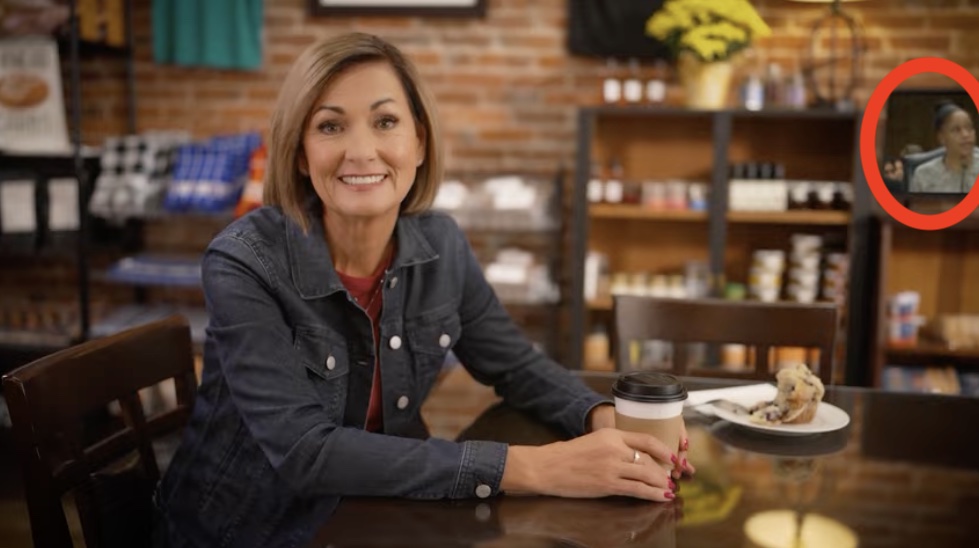 Although this woman looked familiar, I couldn't place her. A Twitter user quickly recognized Professor Khiara Bridges of the University of California Berkeley law school. Bridges serves as faculty director of the Berkeley Center on Reproductive Rights and Justice.

She also happens to be the author of a primer on critical race theory. Reynolds has falsely characterized that scholarly approach as a threat to Iowa's K-12 students. After she signed a bill in 2021 that didn't mention critical race theory, but was designed to chill classroom discussions of systemic racism and sexism, the governor boasted in a news release, "I am proud to have worked with the legislature to promote learning, not discriminatory indoctrination."

Bridges' hair and clothing indicate that this footage came from a U.S. Senate Judiciary Committee hearing in July. The professor received some national media attention after she sparred with Republican Senator Josh Hawley during that hearing, which focused on the impact of the U.S. Supreme Court overturning Roe v Wade. (Hawley had disparaged Bridges' references to "people with the capacity for pregnancy.")

Let's be clear: setting up a second Black woman as a foil for Kim Reynolds ("Aren't you glad you live in Iowa?") is not about "failed policies supported by liberal Democrats across the country," as the governor's spokesperson claimed. Professor Bridges isn't running for office anywhere. Putting her on screen sends the message that things may be bad in other places, like where this Black woman is, but not here.

Two Black women with no connection to the Iowa governor's race don't turn up in a Reynolds ad by accident. Perhaps the ad-makers filmed several takes, some leading with Bush's comments about defunding the police, and some leading with a clip of Bridges that would rile up a white audience.

Why leave a glimpse of Bridges with no context? Editors may have preferred Reynolds' delivery of one line from that take and forgotten to photoshop Bush back into the frame.

OTHER CRITIQUES WORTH NOTING

I want to highlight some excellent points raised by others who have weighed in on the Reynolds ad. All of these commentaries are worth reading in full.

Reynolds and her team know exactly what they’re doing. [...]

They know what they’re doing when they follow up that deceptive moment with scary rhetoric about attacks on police, open borders and “paying people not to work,” with a big welfare sign. [...]

The governor is choosing fear over hope. It makes no sense, but it’s become very common in Iowa.

From Andy Kopsa's post at her Noheartland newsletter on Substack:

Reynolds erroneously and bizarrely says that that people are being paid not to work as the welfare sign flashes on the screen. Bush is a stand in for DeJear who is meant to be stand in for all Black women. This racist conflation isn’t new.

“Welfare queen” is the Reagan era slogan that is a clear racist attack. The welfare queen leans on white fear over Black women’s sexuality and that they have more children to collect more money from the government. [...]

A 1996 survey of national polling data found that white Americans responded to “racially coded language” and further they disapproved of “welfare” as something received, as they saw it, by African Americans.

From the Des Moines Register's editorial board, authored by Lucas Grundmeier:

In 10 days since the 30-second commercial was released, its unsubtle message distinguishing mostly white Iowa from dangerous “others” has been denounced over and over in the news media and on social media.

We feel compelled to add our voice: The ad is dehumanizing. It’s racist. It’s embarrassing. It’s indefensible. It should be beneath any Iowa elected official.

It tells people who look different from most Iowans that, at best, they are indeed different and, even worse, inferior. [...]

Reynolds has often since 2020 sought to conflate actual attacks on police with any criticism of law enforcement. Notably, she quietly allowed lawmakers to ditch her proposal to restrict racial profiling while they passed crackdowns on protester conduct and protections for officers.

As governor, she's repeatedly made demonizing remarks about immigrants.

In novel writing, we’re told to open a book or scene in the middle of the action. Reynolds' ad does that. Without preamble, before we quite know what’s happening, we’re thrown into this peaceful, pristine coffee shop, watching a Black woman on a TV screen.

In two seconds, this opening delivers a political trifecta: (1) an "angry Black woman" (because any Black woman, including me, being passionate about anything is often deemed “angry”) who the viewer has no time to identify (but perhaps it doesn't matter, if we throw in the stereotype that all Black people look alike), (2) advocating for the defunding of the police, a perceived "Black issue" that instantly triggers some people, (3) both of which the viewer is supposed to associate with Reynolds' opponent in the race for governor, Democrat Deidre DeJear. All of which is the antithesis of what Iowa is, according to the ad.

From University of Northern Iowa Professor Christopher R. Martin, an expert on media criticism whom Chase interviewed for her latest column:

“She's just sitting there very leisurely in a nice café," Martin said. “There's no other people around her, but it's supposed to present this very calm view of Iowa. So we don't have any of these difficult things. Thanks to the governor.” [...]

"Aren’t you glad you live in Iowa?" Reynolds continues before exiting the pristine coffee shop and walking along a pristine sidewalk in a pristine, upscale non-urban neighborhood that, since there are no people to disprove it, gives the impression of being white.

"All these bad things that are happening, again, they're not happening here. They're happening in the crazy world that's outside of Iowa. And we should be appreciative that the governor's prevented those things from happening here," Martin said.

Incidentally, I learned this weekend that the ad was filmed in Pella (an overwhelmingly white and conservative town) at The Bread Board cafe.

Chase asked Martin about the cross Reynolds is wearing around her neck, which the viewer can see as she walks down the street.

"That's very much a signal to Christians and evangelicals that she's on their side," Martin said. "This talks about political alliances. It doesn't have anything to do with being a governor, but it actually tells you what kinds of things she will be supporting as governor. And so she'll be supporting things that certain religious organizations support."

Along those lines, Reynolds has already used her office to promote tenets of Christian theology and periodically has conveyed the idea that real Americans are Christians. Most notably, she is seeking to reinstate a near-total abortion ban, a top priority for the religious right.