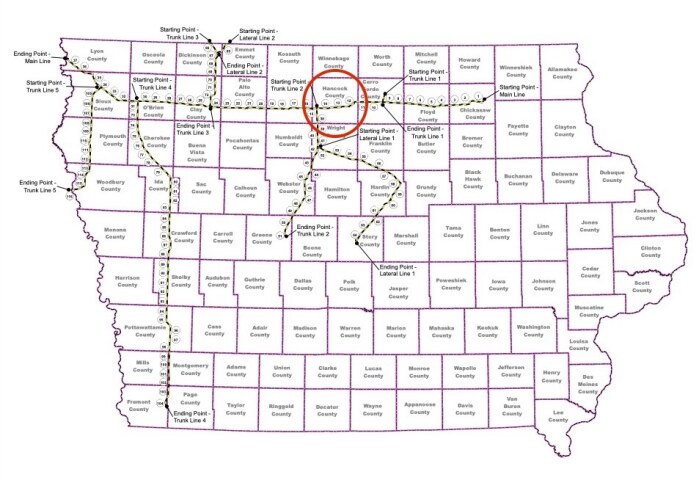 "I did not see this coming," tweeted Carolyn Raffensperger, an environmental lawyer and the executive director of the Science & Environmental Health Network. She was referring to the Hancock County Republican Central Committee asking the Iowa Utilities Board to reject proposed carbon dioxide pipelines.

Republican-controlled boards of supervisors in dozens of Iowa counties (including Hancock) have formally objected to CO2 pipeline plans in their jurisdictions. But the December 19 letter, which the utilities board published on December 29, appears to be the first time a county GOP organization has weighed in.

Republican candidates routinely receive more than 70 percent of the vote in this part of north central Iowa, and Democrats have not fielded candidates lately for most Hancock County offices.

The Hancock GOP committee argued against the pipelines on four grounds. Although only one company (Summit Carbon Solutions) has proposed a route crossing Hancock County, the signers asked the board to file their objections to all CO2 pipelines.

The proposed CO2 pipeline is not a government project. It is a private company trying to install this privately owned pipeline through our county. Will it benefit the general public of our county or for that matter any Iowa county? The answer is no. It will only benefit the bank accounts of a few individuals.

With the increased burden of the additional hazardous material training that will be required, recruiting and retaining volunteer personnel will be difficult. [...] Are these private companies willing to pay the cost of fulltime staff to meet the needs? Are they willing to pay for all the necessary equipment needed to protect the volunteers in the event of a leak? We highly doubt it.

That section of the letter also noted the "extreme risk" associated with a pressurized gas that could kill people if a pipeline ruptured, as happened in Satartia, Mississippi in February 2020.

Third, the GOP committee claimed carbon dioxide is "already in short supply" for some uses in daily life, such as carbonating beverages. Transporting the gas to an underground cavern in another state "will only further fuel inflation," which many people cannot afford. It would make more sense for "ethanol facilities to capture their CO2 and convert it to other marketable products onsite."

Finally, the Hancock Republicans argued that pipeline construction would pose a threat to drainage tile used to farm highly productive soils. "A tile collapse of one of these county tile lines could affect several other neighboring farms," causing landowners who received no compensation from Summit to lose crops. (Research has shown corn and soybean yields declined in areas affected by oil pipeline construction.)

The three Republicans on the Hancock Board of Supervisors raised similar points in their December 2021 filing with the Iowa Utilities Board, urging that the board deny Summit Carbon Solutions a pipeline permit. That letter cited possible damage to the county's 140 drainage districts, challenges for local emergency management groups, the use of eminent domain to benefit a private company, as well as the "gross lack of communication" between Summit and the Hancock supervisors regarding this project.

Two months ago, Iowa House Speaker Pat Grassley observed in his own letter the Iowa Utilities Board, "In my sixteen years in the Iowa House, I have never heard more concerns from constituents related to a single issue than the CO2 pipeline project currently proposed for our area." Grassley was writing about a waiver request from Navigator, which has proposed a pipeline crossing Butler County.

Summit's project presents a much bigger political problem for the Republican establishment. The firm is part of a corporate group associated with Bruce Rastetter, among the largest individual donors to Iowa Republican candidates (including legislative leaders) over the past fifteen years.

Here's the route map Summit filed with the Iowa Utilities Board in January 2022. I added the red oval to indicate Hancock County's location. 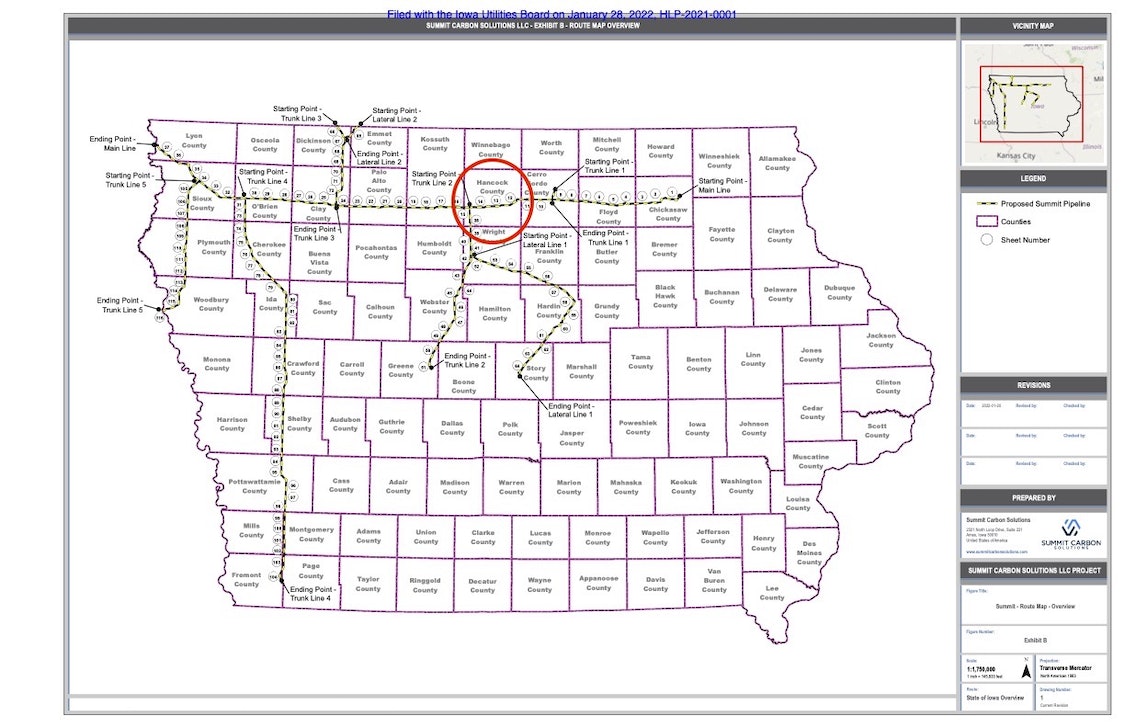 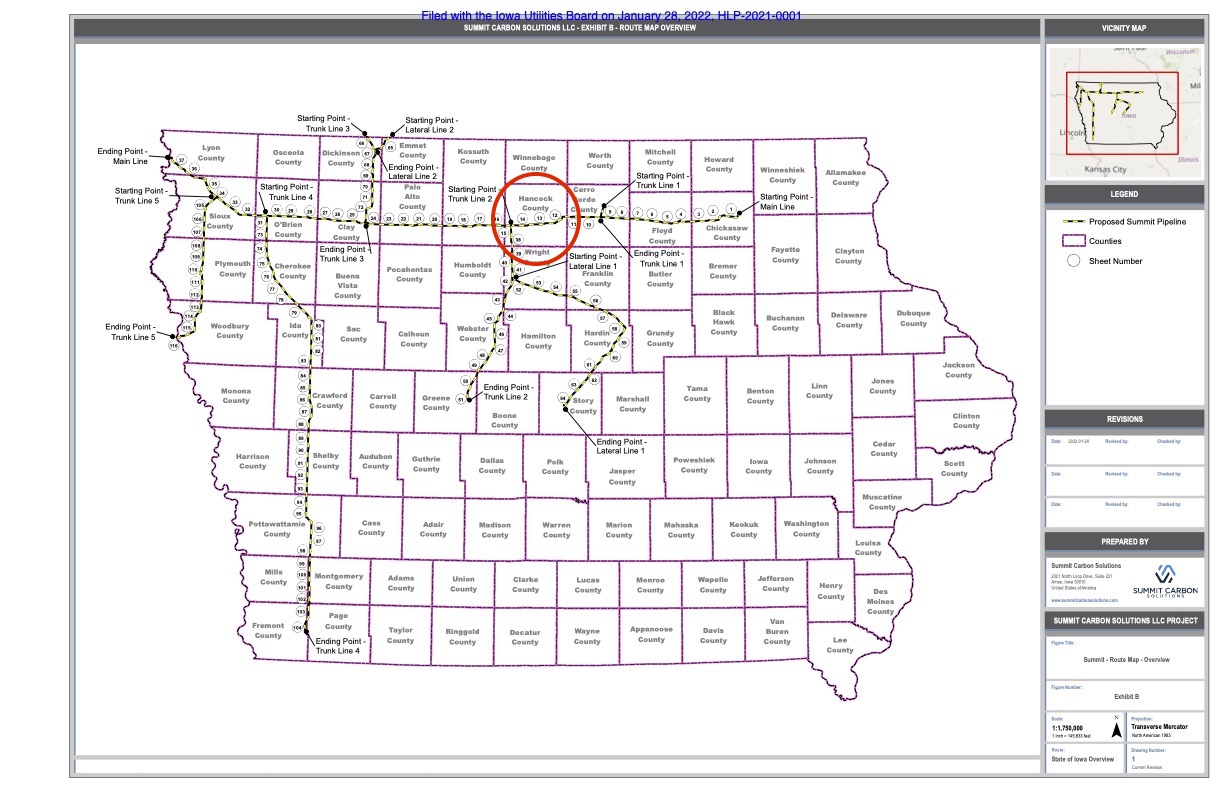 Normally, Iowa GOP politicians would not oppose what a powerful donor wants—especially since biofuels interests and some agricultural sector lobby groups (like the Iowa Corn Growers Association) are also all in for CO2 pipelines.

But individual farmers and Republican activists are overwhelmingly against seizing farmland for this purpose. That's one reason nearly every county board of supervisors in northwest Iowa, the reddest part of the state, has filed a formal objection to one or more CO2 pipelines.

Iowa House and Senate leaders squelched bills to regulate eminent domain during last year's legislative session. But the issue may become a hot topic at the statehouse in 2023.