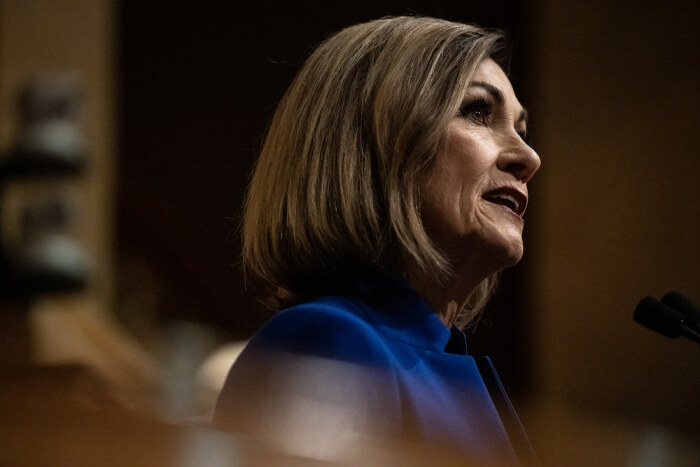 As expected, Governor Kim Reynolds devoted a significant share of her Condition of the State speech on January 10 to her plan to divert more public funds to private K-12 schools across Iowa.

Although the central purpose of the plan remains the same—giving state funds to families who choose to send their children to a private school—the latest version is vastly larger in scope, and will be more costly.

The governor's school voucher plan easily moved through the Iowa Senate but failed to muster support in the Iowa House two years in a row, despite large Republican majorities (59-41 in 2021 and 60-40 last year).

The chances of passing the bill this year have improved, since Republicans have a 64-36 advantage in the new chamber, and several of last year's voucher opponents lost GOP primary elections to Reynolds-backed challengers.

Perhaps for that reason, the governor's new proposed bill is more ambitious.

Last year's bill did not specify an amount for each student, but the nonpartisan Legislative Services Agency estimated a typical student would receive $5,521 annually. That would have involved a state general fund appropriation of $55.2 million for fiscal year 2023.

My school choice bill will create education savings accounts for families who choose to send their child to a private school. The State will contribute $7,598 to that account, which is the amount of funding the State provides for each child who attends a public school.

The $7,598 per student assumes a 2.5 percent increase in state funding for K-12 schools, which the governor is requesting for fiscal year 2024. The legislature has yet to approve that amount.

The governor's office estimates the plan would cost $106.9 million in the first year, assuming 14,068 students would be eligible.

NO INCOME LIMITS AFTER TWO YEARS

Previous plans targeted state aid to families that were not well-off. The new bill allows students to qualify in the first year if their family's household income does not exceed 300 percent of the federal poverty level. The second year, education savings accounts would be available to students from households with incomes up to 400 percent of the federal poverty level.

In the third year, starting on July 1, 2025, every Iowa family would qualify for the education savings fund payment, no matter how high their income.

This idea could be a tough sell for some rural lawmakers, because per capita incomes are lower in many rural counties than in larger metro areas, where most Iowa private schools are concentrated. This map uses state data for 2020 and shows per capita personal income (not household income) by county. 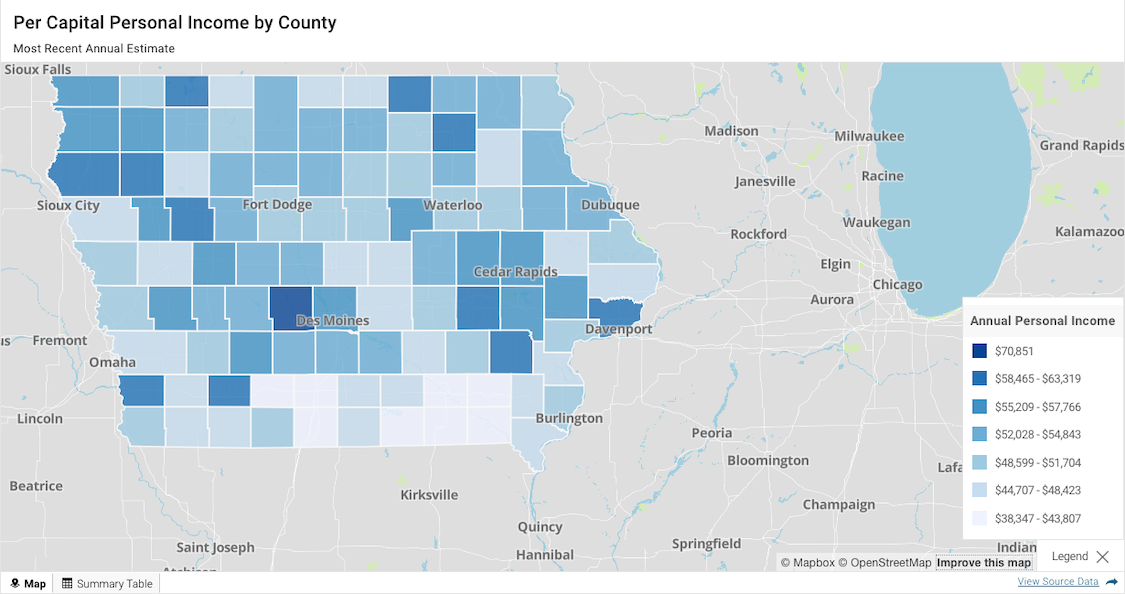 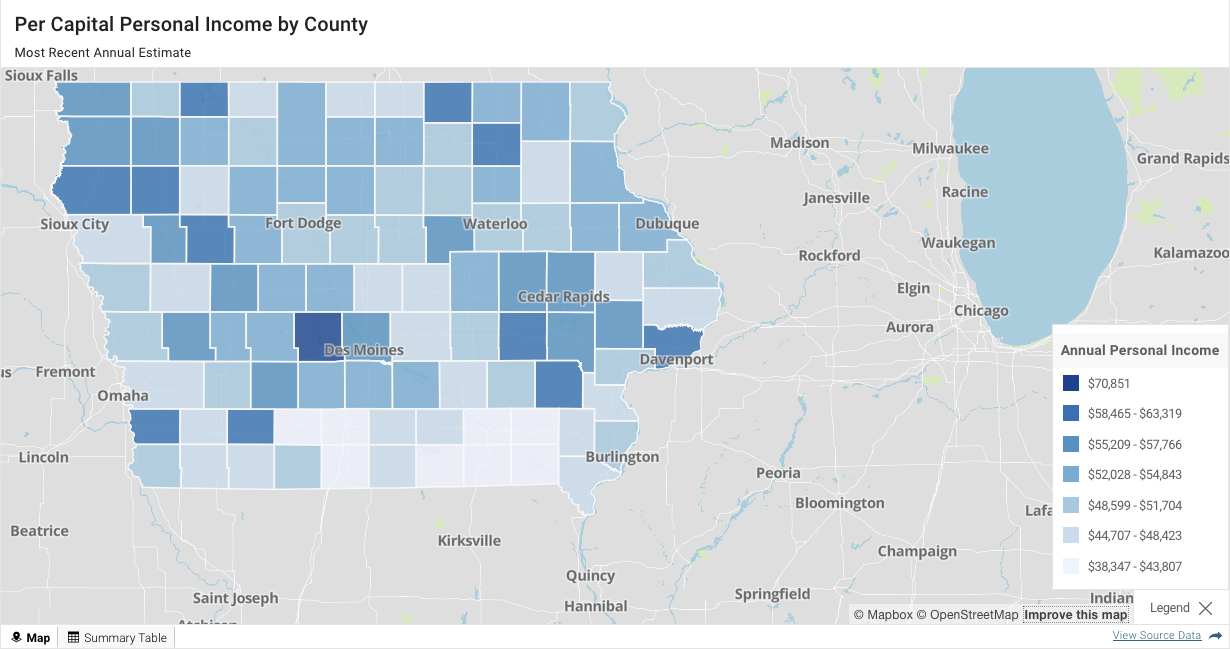 The think tank Common Good Iowa created this map, showing how many private schools are located in each county. 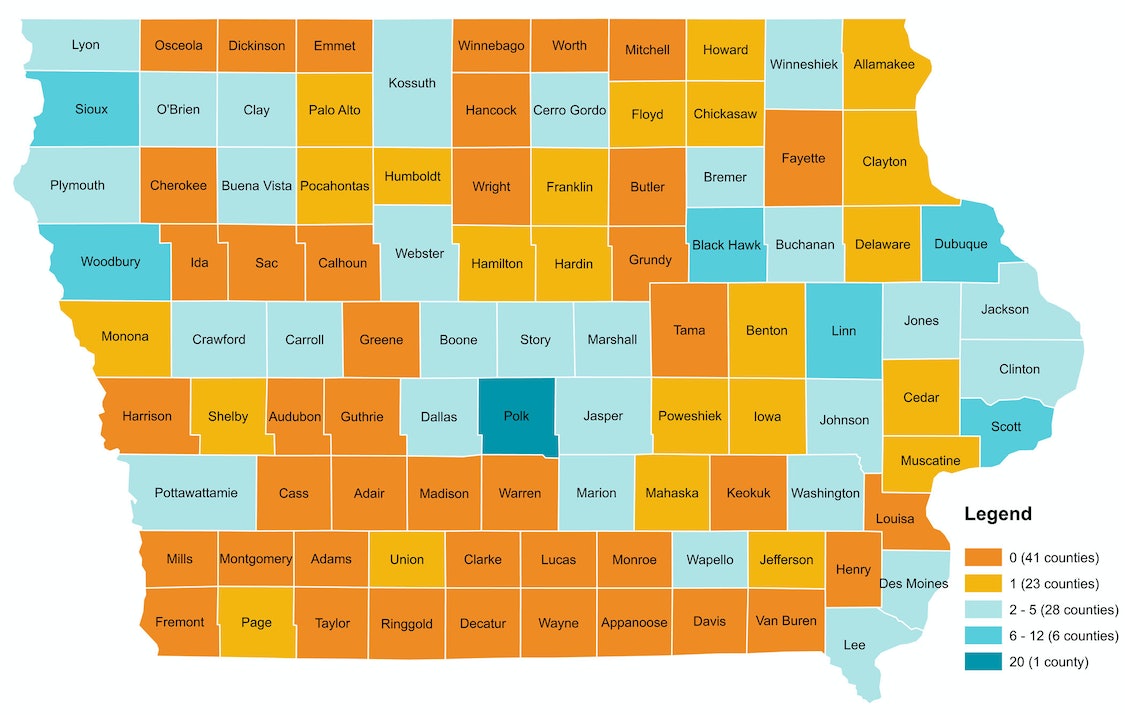 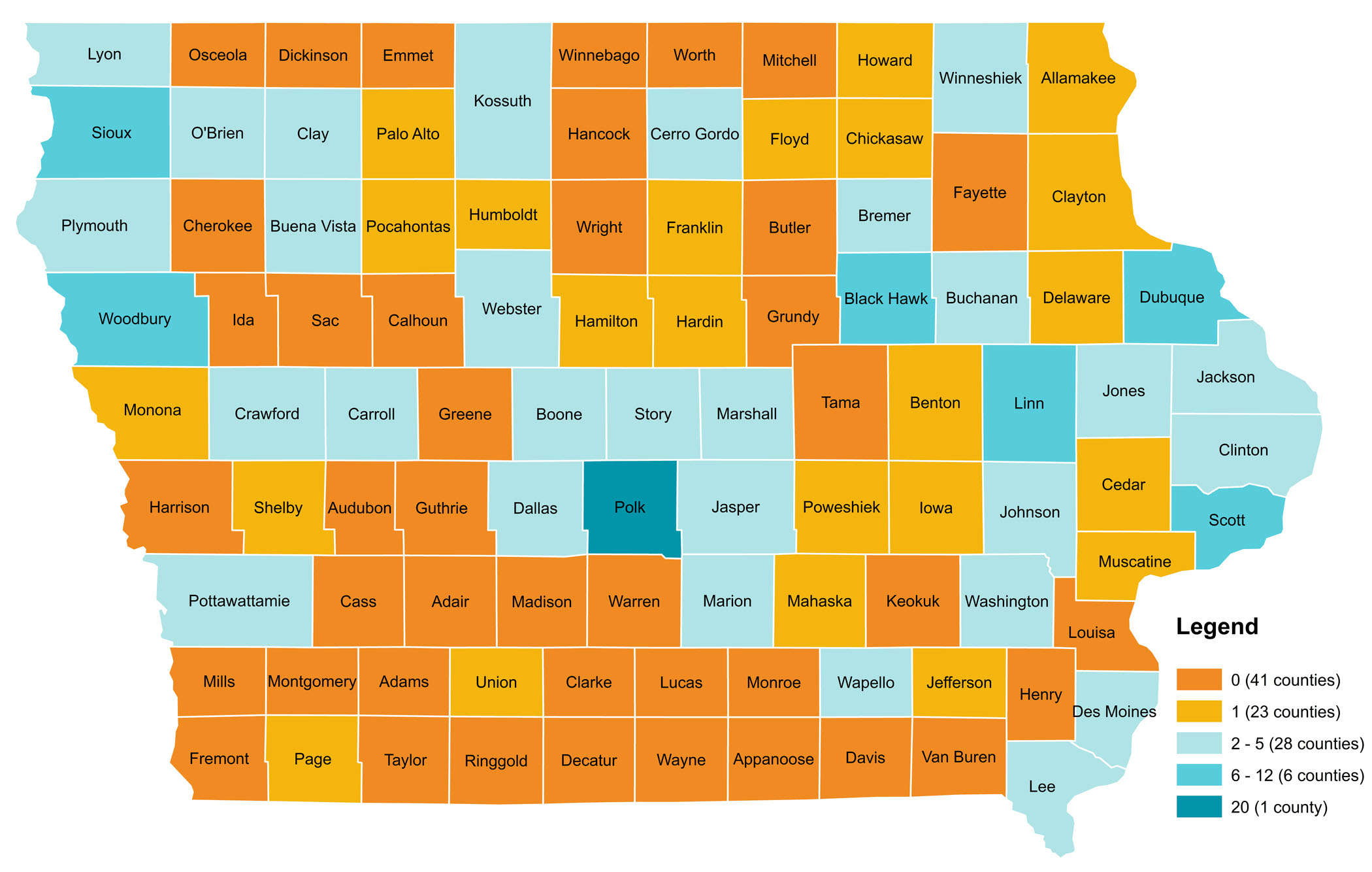 Governor Reynolds’ voucher proposal will pull critical resources from public schools which serve more than 90% of Iowa students. It will send public dollars to private schools most Iowa families will never benefit from. Private schools choose who they serve and limit access to who they admit and employ, and most families will be excluded from participating in a voucher program based on where they live.

Last year's plan would have supported 10,000 students who want to transfer from a public to a private school.

The new plan would also benefit families whose children are already enrolled at private schools. The income limits mentioned above would apply for the first two years, but starting in July 2025, every child now attending private school could receive the state payment.

Assuming the state payments remain around $7,600 per year, and every family with children enrolled in private schools exercised the option to take those funds, education savings accounts would cost the state at least $256 million annually. The Legislative Services Agency has not yet published a fiscal note on the bill, but should do so before it receives a vote on the House or Senate floor.

Remember, dozens of Iowa counties have no private schools, and dozens more have just one private school. The upshot is that taxpayers across much of rural Iowa, with no options aside from public school anywhere near their home, would be subsidizing private school tuition for wealthy families in larger communities.

NO ROLLING OVER VOUCHER FUNDS FOR COLLEGE COSTS

The governor's new bill does allow unspent funds in education savings accounts to roll over to subsequent fiscal years. However, it stipulates that funds remaining in a student’s individual account when the pupil graduates from high school or turns 20 years old will revert to the state’s general fund.

Many families would be in a position to save a portion of each year's voucher payment. Caleb McCullough reported for the Cedar Rapids Gazette that $7,598 would exceed tuition costs for many private schools.

The average cost for a Catholic school in Iowa last year was between $2,800 and $4,000 for grades K-8, and $9,000 for high school, executive director of the Iowa Catholic Conference Tom Chapman said.

For Protestant Christian schools, the average is $5,938 for elementary, $6,138 for middle, and $7,592 for high school, according to the Iowa Association of Christian Schools.

Only a handful of Iowa's private schools are not Christian or Catholic.

The bill states that parents and guardians "shall first" use education savings account funds for tuition and fees. Other qualifying expenses include:

The bill also mentions "education materials and services for pupils with disabilities from an accredited provider, including the cost of paraprofessionals and assistants who are trained in accordance with state law," but private schools are not required to accept students with disabilities or provide any special education services. Many routinely refuse to make such accommodations.

The bill lists several types of expenses that could not be covered with an education savings account, including transportation, food, clothing, and "disposable materials" such as paper, notebooks, pencils, pens, and art supplies.

Many lower-income families would be unable to send their kids to a private school without some help covering transportation costs, which can exceed a thousand dollars a year even when the school is in the same city. So the bill falls short of the governor's promise in her Condition of the State that "no child will be limited by income or zip code."

Reynolds tried to address concerns of House Republicans representing rural areas in 2022 by designating some state funds for districts with fewer than 500 students. But it wasn't enough to get to 51 votes in the chamber.

The new plan would compensate all public school districts for area children who choose to attend private schools. Stephen Gruber-Miller and Katie Akin reported for the Des Moines Register,

For the first time, the new legislation would provide categorical funding to public school districts for all students who live within their district, including students who attend private schools.

Reynolds estimates public school districts would receive about $1,205 for every student attending private school in their area — which would be new funds the districts didn’t previously get.

That money wouldn't go very far when you consider that the district would lose around $7,600 for every enrolled student who switches to a private school, or open enrolls to another public school district.

Republican lawmakers may alter some of the bill's provisions before the legislation reaches the floor in either chamber. An Iowa Senate Education subcommittee will consider the governor's plan on January 12, and the Iowa House will hold a public hearing on January 17 at 5:00 pm. Iowans wishing to speak or submit written comments can sign up here.