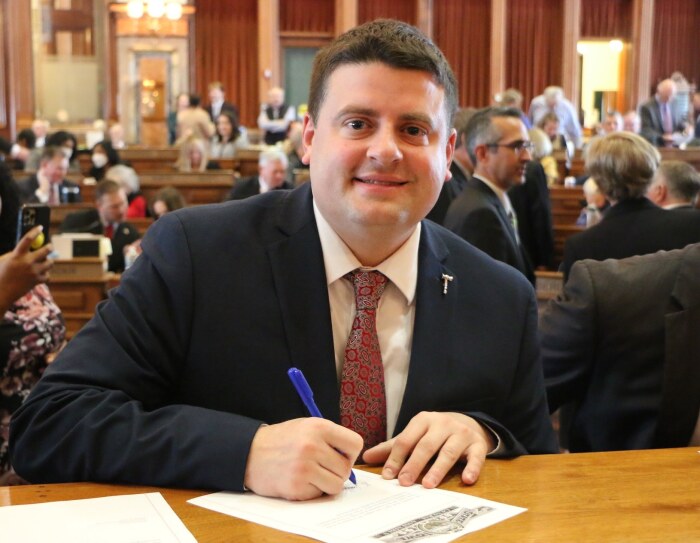 Since Republicans gained control of the Iowa House for the 2011 session, every rules package has contained the following language under Rule 32:

House Study Bill 31 would exempt "bills assigned to the Education Reform Committee" during the 2023 session or any special legislative session from moving through the Ways and Means and Appropriations committees.

Speaker Pat Grassley created the Education Reform Committee for the express purpose of considering major legislation, such as the governor's plan to provide state funds to families choosing to enroll their children in private schools. The panel's five members include Grassley, Majority Leader Matt Windschitl, and Speaker Pro-tem John Wills, all of whom support "school choice." So the Education Reform Committee is guaranteed to advance the bill, perhaps with some amendments.

The governor's proposed bill, numbered House Study Bill 1, appropriates state funds to thousands of qualifying students' "education savings accounts." It also affects tax collection by stipulating that "an education savings account payment received by a taxpayer is not taxable income for purposes of state individual income taxation." So under the previous Rule 32, the voucher plan would need to be referred to both Appropriations and Ways and Means before reaching the House floor.

Those committees each have 25 members: sixteen Republicans, and nine Democrats. So if any four Republicans on either panel are not inclined to support the governor's plan, they could vote with Democrats against bringing it out of committee.

Appropriations chair Gary Mohr was among the House Republicans who opposed last year's "school choice" plan, because of a provision that would have directed certain funds to rural schools. Speaking to Sarah Watson of the Quad-City Times after Reynolds unveiled the latest version of her proposal, Mohr said he is still reviewing the bill but has two concerns: its cost (which would run to hundreds of millions of dollars annually), and a possible threat to private schools' independence once they accept taxpayer dollars through education savings accounts.

A few other Republicans now serving on Appropriations have been voucher skeptics in the past, such as Brian Lohse and Norlin Mommsen. Another member of the panel, Michael Bergan, praised last year's bill for being "targeted and narrow"; the new plan is much broader and more expensive.

The House has new leadership on Ways and Means, since the previous committee chair, Lee Hein, lost the 2022 primary to a fellow House Republican who supports school choice. The new chair Bobby Kaufmann has not publicly confirmed he will vote for the governor's plan, but vice chair Barb Kniff McCulla is an enthusiastic backer. It was the central issue in her GOP primary victory against an incumbent in 2022.

The House has an unusually large number of new GOP members due to retirements and redistricting. While many of the first-termers are on record supporting the governor's plan, not all have taken a public stance. Some whose positions are unknown serve on Ways and Means or Appropriations.

Assuming House Republicans adopt the new rules package in the coming weeks, Grassley won't have to worry about getting the school choice plan through the tax-writing and spending committees. He will only need to get at least 51 of his 64 caucus members behind the bill on the House floor.

It's striking that House leaders feel compelled to tinker with long-established process to get this plan across the finish line, given the large GOP majority.

The Education Reform Committee hasn't scheduled a subcommittee meeting on House Study Bill 1. That will likely happen soon after a public hearing the Iowa House has set for January 17.

Appendix: Links to Iowa House rules adopted at the beginning of each two-year session under Republican control. All contained the same language as Rule 32