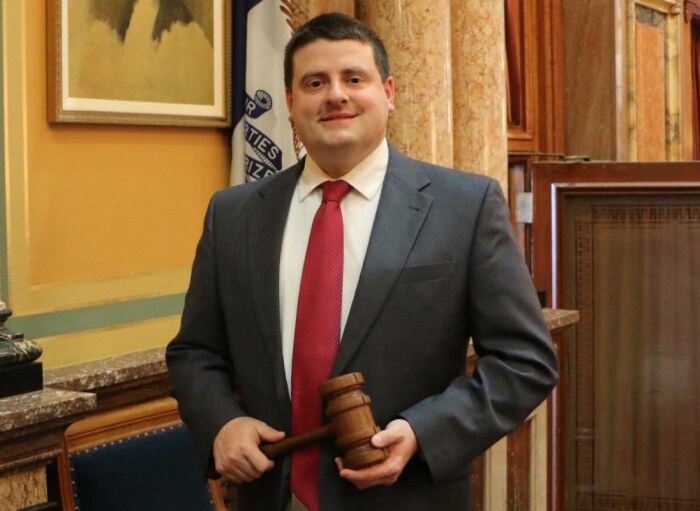 Iowa House Speaker Pat Grassley sent Governor Kim Reynolds a message this past week: her school voucher plan will need to go through him before it reaches the House floor.

In an unusual move, the speaker put himself in charge of a new five-member Education Reform Committee "dealing with bills containing significant reforms to our educational system."

The decision could signal Grassley's determined to get a "school choice" bill to Reynolds' desk, after House Republicans couldn't find the votes for the proposal over the past two years.

Alternatively, it could give more cover to GOP holdouts by sparing them from voting against the governor's plan in committee.

In a written statement provided to some media on November 16, Grassley said, “The House Republican caucus plans to consider a broad set of education reforms this session. This new committee will allow these important issues to be put in front of the entire caucus for the in-depth discussions they deserve.”

I'm not aware of any precedent for the Iowa House speaker to handle a hot potato in this way. If certain caucus members are blocking a high-profile bill, it would be more typical for the speaker to remove them from the relevant committee, or assign the bill to a different committee.

For whatever reason, Grassley does not want State Representative Skyler Wheeler, whom he selected to chair the House Education Committee, to handle the most weighty bills that would normally fall under that panel's jurisdiction. Wheeler is a outspoken "school choice" advocate and had Reynolds' endorsement in his 2022 primary.

Republican leaders have not specified which other education reforms may be on the table. One that will likely be paired with the voucher plan is a so-called "transparency" bill, which would force public schools to post more information about library books or curriculum materials. Reynolds has previously said she wants transparency language to be combined with her school choice plan.

I have heard speculation that Grassley's committee may consider changes to the K-12 school funding formula Iowa has used for nearly five decades. Most of the House Republicans who opposed Reynolds' plan in 2021 and 2022 represented rural areas. Small rural districts arguably are most threatened by the voucher plan, because losing state funding for even a few students could force them to cut teaching staff. In addition, rural school districts often have a smaller property tax base to help make up for lost revenue from the state.

HOUSE REPUBLICANS MAY STILL NOT HAVE THE NUMBERS FOR VOUCHERS

The governor's difficulty in getting this bill through the House is itself surprising. Republicans enjoyed a 59-41 majority during the 2021 legislative session and a 60-40 advantage this year. By many accounts, at least 20 House Republicans and perhaps as many as 24 were unwilling to vote for "school choice" during the 2022 session.

Reynolds responded by inserting herself into several competitive GOP legislative primaries, which no Iowa governor had done in living memory. Most of her endorsed candidates were successful.

Next year, the House will likely be split 63-37 (recounts are pending in a few close races). It's tricky to do a head count, because not all of the holdouts were "loud and proud" about their views. But the following opponents of Reynolds' plan won't be back in 2023:

To my knowledge, only one public opponent of school vouchers survived a GOP primary challenge in 2022: State Representative Jane Bloomingdale. Reynolds did not endorse her opponent (Deb Hild), but some conservative interest groups spent money supporting the challenger.

Eight House Republicans opted not to seek re-election to the legislature this year: Rob Bacon, Terry Baxter, Holly Brink, Cecil Dolecheck, David Kerr, Jarad Klein, Ross Paustian, and Gary Worthan. Not all of them were on record about the voucher bill. Klein had said he favored "parental choice" but not the governor's proposal in its current form. Dolecheck had publicly expressed concerns about the governor's plan, as had Worthan. Paustian was one of the holdouts as well.

State Representative Charlie McClintock, another opponent of the voucher plan, won't be back in the House because he was just elected to the Iowa Senate. I believe the three other House Republicans who won state Senate races this month—Mike Bousselot, Sandy Salmon, and Cherielynn Westrich—have spoken out in favor of "school choice."

The upshot is that about a dozen of the House Republicans who helped keep the voucher bill from passing in 2021 and 2022 won't be in the chamber next year.

Assuming the GOP majority is 63-37, Grassley can afford to lose at most twelve members. Many newly-elected Republican lawmakers will support the governor's plan, but not all have publicly committed to it. If even a handful of them don't want to allocate tens of millions of public dollars to benefit 2 percent of K-12 students (some of whose families can already afford private school tuition), the speaker may not have 51 votes for the bill.

WILL REYNOLDS BE ABLE TO STRONG-ARM PAST HOLDOUTS?

Coming off a landslide election win, Reynolds will be even more determined to get her top priority through the legislature. In her victory speech on November 8, she promised to make Iowa a place "where our schools are thriving and all parents have a choice." National advocates for defunding public schools and teachers' unions are counting on her. As chair of the Republican Governors Association in 2023, Reynolds won't want another failure in a GOP-dominated legislature.

So I expect her to exert massive political pressure on House members who aren't on board with "school choice."

Some who publicly opposed the governor's plan during this year's legislative session, such as Gary Mohr, Chad Ingels, Brian Lohse, and Tom Moore, didn't face 2022 primary competition. Reynolds may have reason to believe she can bring some of them around by threatening to endorse opponents in the 2024 primaries.

On the other hand, Bloomingdale's success may give colleagues hope of a similar result. In addition, some House Republicans who lost this year's primaries had extra baggage that wouldn't apply to other lawmakers. For instance, Hein and Maxwell had voted against abortion restrictions. Thorup was running in a redrawn district that no longer included Knoxville (the population center of his old district) but did encompass Pella, which has had a Christian high school since the 1930s.

In conversations with Iowans close to the legislature this summer and fall, I heard one thing again and again: Reynolds outraged many House Republicans by wading into Hite's primary. Not only was Hite well-liked in the caucus, he had been a loyal foot soldier on lots of bills that came through the House Education Committee, which he chaired. He had floor managed at least two of the governor's priority bills: a 2021 tax cut that also changed mental health funding, and the 2021 ban on school or local government mask mandates.

If the governor could turn on Hite over a good-faith disagreement about one issue, the same thing could happen to anyone who dissents from anything Reynolds wants. Some Republicans may not want to roll over on the voucher bill, fearing it would embolden the governor to force their hand on other policies.

Here's where Grassley's new committee comes in. Running the most controversial bills through a five-member Education Reform Committee shields others in the caucus from having to take subcommittee or committee votes. The speaker hasn't announced which other Republicans will serve on the new committee. Presumably he'll pick people who, like himself, broadly support Reynolds' education agenda. They won't become targets the way Hite and others did in this year's primary races.

Reynolds has been known to summon House Republicans to her office for a lecture about the school choice bill. Next year, she or her staff will have to negotiate with the speaker directly. Maybe the governor will give some ground on school funding or something else that matters to the holdouts. (She already dangled some extra money for rural school districts, which wasn't enough to get the bill through.)

I suspect that if Grassley were confident this concept had the votes to pass, he'd have the Education Committee chair run the bill through the normal legislative process.

So while I wouldn't bet against Reynolds prevailing in the end, vouchers are far from a done deal in the Iowa House.

Top photo of Iowa House Speaker Pat Grassley cropped from an image posted to his political Facebook page on November 10.