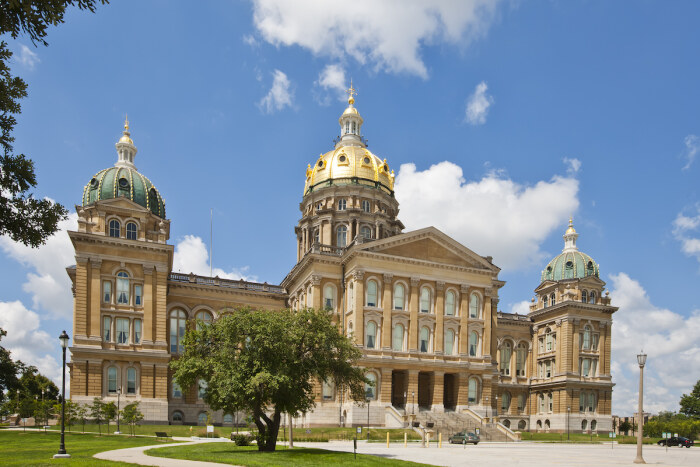 After a hectic two days at the capitol, the Iowa House and Senate finished their work for the year shortly after midnight on May 25.

In the coming days, Bleeding Heartland will cover some of the final bills in detail. As usual, there were a few surprises in the "standings" bill, such as a provision expanding open enrollment from public schools. While Democrats opposed many bills sent to Governor Kim Reynolds this week, including a ban on COVID-19 vaccine requirements for schools or child care centers, they welcomed one of the last-minute proposals, which exempts diapers and period products from Iowa's sales tax.

This piece will focus on bills that didn't make it through, despite a push from Reynolds or top Republican lawmakers.

I anticipate future legislative battles over most if not all of these proposals. Earlier this year, the governor signed into law two priority items that failed to advance in 2021: a measure banning transgender Iowans from girls' and women's sports, and deep cuts to unemployment benefits.

Despite a 60-40 Republican majority in the Iowa House, leaders couldn't convince 51 members to support the governor's plan to divert an estimated $55 million in public funds to 10,000 students who want to attend private school. At least fifteen and as many as two dozen House Republicans refused to support the proposal. Some explained their reasons, while others were quietly opposed.

Reynolds wanted this one very badly. She made the case during her Condition of the State address in January. She tweaked the proposal to direct more state funds to small school districts. She tried to persuade House Republican holdouts as a group and in some one-on-one meetings. She sought support from rural superintendents—a misguided effort, since superintendents rightly saw the voucher plan as a threat to their budgets. The governor has privately backed GOP primary challengers to several House members and publicly endorsed in one of those races.

The dispute over "school choice" was main reason the Iowa legislature didn't finish its work weeks ago. Senate leaders hoped that by holding up budget bills, they would pressure the House to pass the school vouchers. But sending the legislature into overtime didn't change minds.

During her big speech to lawmakers at the beginning of the session, the governor called for more "transparency" regarding school curriculum materials and library books. House Speaker Pat Grassley and Senate Majority Leader Jack Whitver sounded committed to that goal, and versions of the legislation advanced in each chamber. One of the bills, which would have required teachers to post anything used for instruction on the school district website before each semester, could have cost districts more than $27 million a year.

I expected some scaled-back transparency bill to pass, to give the governor a win on her agenda for Iowa schools. But Reynolds told WHO-Radio host Jeff Angelo on May 18 that she wanted transparency language combined with "parental choice." If the governor is re-elected in November, this will be part of her legislative agenda for 2023.

The Iowa Senate has repeatedly passed bills designed to reduce the number of Iowans receiving Medicaid, food assistance, and other benefits. In 2021, Reynolds quietly endorsed the plan as part of her office's proposed health and human services budget.

For several years in a row, the House Human Resources Committee buried all of the Senate-approved measures targeting Iowans on public assistance. But that committee's new chair, State Representative Ann Meyer, took up some of the proposals early this year. She bundled them into a bill that came out of her committee on a partisan vote. The bill was referred to the House Appropriations Committee, which moved it through subcommittee but took no further action.

Republican State Senator Jason Schultz, who is unopposed for re-election this November, will never stop trying to pass this kind of bill. The diverse coalition of groups that have lobbied against these proposals should be ready to fight again in 2023.

It's not every day that a legislative body volunteers to cede some of its authority to another branch of government. But Iowa Senate Republicans voted to do that this year. Senate File 2263 would have allowed the governor to appoint members of 29 state boards and commissions without any Senate action. Under current law, those nominees need support from at least two-thirds of the Senate (34 members) to be confirmed.

Under Senate State Government Committee chair Roby Smith's proposal, a confirmation vote on any member of an affected board or commission would be required only if state senators collected 26 signatures. In other words, the Senate majority party would retain the ability to force a vote on any appointee. But the minority party (which currently can prevent nominees from gaining 34 votes) would be powerless to reject Reynolds' choices for the bodies named in the bill. Those included the Iowa Civil Rights Commission, Iowa Public Information Board, and many commissions that address marginalized communities (people with disabilities, Latinos, African Americans, and Asian and Pacific Islanders).

When the Senate debated the bill in March, Democratic State Senator Janet Petersen emphasized the importance of checks and balances. She mentioned several examples of nominees who were rejected or had their nominations withdrawn after scrutiny during the confirmation process.

Democratic State Senator Todd Taylor expressed concern about removing confirmation requirements for the Board of Corrections and the body that oversees the Iowa Law Enforcement Academy. He noted that the academy board had been expanded in recent years to ensure broader representation and had done important work in 2020 on the academy's training manual regarding chokeholds.

Defending his bill, Smith said it would "streamline" the process. He denied that it would eliminate checks and balances, since senators would be able to object to any nominee by collecting 26 signatures.

Two Democrats, State Senators Joe Bolkcom and Herman Quirmbach, joined Republicans to vote for final passage of Senate File 2263—but not because they shared its goals.

Quirmach told Bleeding Heartland via email at the time, "Smith doesn't believe in democracy, witness his leadership role in voter suppression." He noted that under the bill, someone would have to file a lawsuit against the governor to "challenge any violation of the statutory requirements for gender balance and party balance on these boards." Furthermore, "There would be no way to challenge the general qualifications of any appointee."

Our only hope of moderating this bill--and a slim one at that--was to try to delete a commission or two from the list. To me the Civil Rights Commission was priority #1 because it has real decision-making authority over individual cases. Given Reynolds' and the Republicans' obvious anti-trans and anti-gay inclinations, as well as their indifference to civil rights in general, allowing her to stack the ICRC with homophobes and others more inclined to attack rather than defend civil rights would be a disaster.

Smith's price of excluding the Civil Rights Commission was that he wanted two Democratic votes for SF 2263. Saving the impartiality of the ICRC was worth the cost of casting that obnoxious vote.

The bill undermines an important check and balance between the legislative and executive branches of state government. I strongly oppose Senator Smith's efforts. I was especially concerned about removing senate confirmation of appointments to Iowa Public Information Board and the Iowa Civil Rights Commission. The members of these groups oversee and make critical decisions on the public's right to know what government is doing and protecting Iowans from discrimination. [...]

I believe that salvaging Senate confirmation for Iowa Civil Rights Commission members was worth voting yes on this bad bill. Was it enough, no.

Bolkcom added that he hoped the bill would be killed in the House.

The House State Government Committee advanced the proposal before the legislature's second "funnel" deadline, with an amendment changing some of its provisions. Although the bill was eligible for debate in the lower chamber, House leaders never brought it to the floor, nor were its provisions added to any budget bills this week.

Smith is on his way out of the legislature, having decided to run for state treasurer instead of for re-election. It's not clear whether other Senate Republicans are equally committed to giving the governor free reign to put anyone she wants on dozens of boards and commissions.

Under current law, OCIO is an independent agency, whose leader is appointed by the governor and subject to Iowa Senate confirmation. The House and the Senate approved the standings bill mostly along party lines, shortly before the legislature adjourned for the year.

House leaders tried this year to resurrect one of their priorities that failed to garner support in 2021. This bill would make Iowa the only state in the country to enact special protections for the trucking industry. The proposal would have limited non-economic damages to $1 million for each plaintiff suing "the owner or operator of a commercial motor vehicle" following a crash that caused a fatality or serious bodily injury.

Trucking companies would be immune from claims of negligence in hiring, training, supervising, or trusting an employee who later caused a crash. The protection would not be limited to Iowa-owned firms; it would extend to all domestic or foreign-owned firms in the industry. A lawsuit a crash survivor filed in March illustrated how broad immunity for trucking companies could impact ordinary Iowans.

This bill didn't go through the committee process in 2022. Rather, it came to the House floor as an amendment, combined with unrelated restrictions on private businesses seeking to require COVID-19 vaccination for employees. The heavy-handed effort backfired, as twelve House Republicans joined Democrats to oppose a procedural motion that would have allowed a vote on the amendment.

The House speaker told reporters in March, "we know we have more work to do" to build support for the proposals that didn't make it. I expected some version of the trucking bill to resurface this week, as rumors of behind-the-scenes maneuvering circulated. But nothing on the topic came to the House floor, either as an amendment or as a stand-alone bill.

Another "tort reform" proposal failed again to make it to the House floor. GOP leaders were said to be working to find 51 votes for capping non-economic damages in medical malpractice cases at $1 million.

As Bleeding Heartland discussed here, companion bills made it out of House and Senate committees in 2021. Some opponents argued it would be unconstitutional for the legislature to limit damages a jury can award. As with the trucking industry proposal, some Republicans were said to dislike the idea of protecting wealthy interests (in this case doctors and insurance companies) at the expense of ordinary people impacted by tragedies.

Nothing happened with the medical malpractice bills in the House or Senate this year (see here and here). Advocates will have to start from scratch when the newly elected legislature convenes next January.