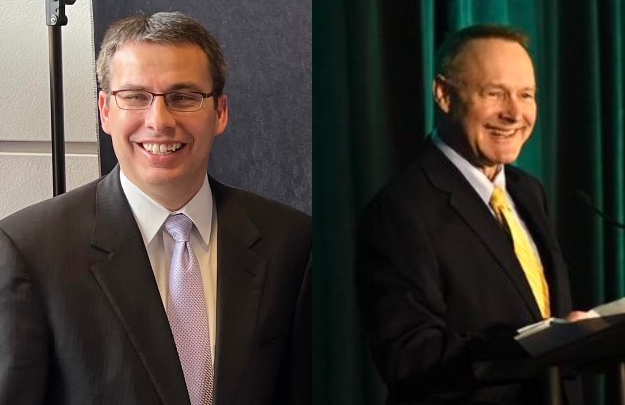 Smith outraising Fitzgerald in treasurer's race. Will it matter?

State Senator Roby Smith is on track to outspend State Treasurer Michael Fitzgerald, if the latest reports filed with the Iowa Ethics and Campaign Disclosure Board are any guide.

A news release from the Republican's campaign boasted that its donations, totaling $213,391.15 so far this election cycle, "have set an all-time record" for a candidate for Iowa state treasurer. Smith raised substantially more than Fitzgerald during the latest reporting period and had nearly three times as much cash on hand.

But it would be premature to conclude, as Smith's news release asserted, "Our historic fundraising number and Fitzgerald’s lack of support shows Iowans are clearly ready for change."

Each candidate takes advantages into what could be Iowa's most competitive state treasurer's race in four decades.

A LOOK AT THE FUNDRAISING NUMBERS

Smith raised an impressive $134,686.12 in 2021. But approximately $40,000 of the total came in before he announced he was running for treasurer in December. Political action committees gave at least $18,000 to the campaign during the last few weeks of the year.

While it's conceivable those PACs suddenly developed an interest in the state treasurer's work, they were more likely attempting to gain influence with Smith in his capacity as Iowa Senate State Government Committee chair during the 2022 legislative session.

Smith's latest disclosure shows $78,705.38 in contributions from January 1 through May 14. The itemized list shows a single $400 PAC donation, which came in a few days before the legislature convened. Iowa candidates for state offices can't accept political committee contributions while the legislature is in session.

Will PACs come in big for Smith after state lawmakers adjourn for the year? Or will they mostly support legislators who have a chance to serve in the Iowa House or Senate in 2023? We'll know the answer when the next campaign finance reports become available in mid-July.

If we include the one donor who gave $2,500, the two who gave $1,500, and the eight who each gave $1,000, then seventeen individuals were responsible for more than 75 percent of the funds Smith has raised this year. While that's a solid haul for a low-profile race, I wouldn't view a handful of large contributions as evidence that "Iowans are ready for change."

Most of the $23,099.81 Smith spent this year went toward consultant services, printing, or direct mail. As of May 14, his campaign had $200,136.15 cash on hand and $8,216.74 in unpaid bills. (Sometimes candidates delay paying for certain expenses in order to report a larger cash on hand number.)

Fitzgerald has never raised a lot of money for his re-election campaigns, and hasn't spent much either. That pattern has held so far this cycle.

During all of 2021, the treasurer's campaign raised $16,481.02. Other than a small amount of bank interest, all of the funds came from individual donors ($1,000 from the candidate). This year, Fitzgerald's campaign has raised $21,583.90. Again, there were no PAC contributions; only individual donations and some bank interest.

Last year, the incumbent's campaign spent just $986.17, of which $500 was a donation to the Iowa Democratic Party. Fitzgerald's campaign reported $1,414.15 in expenditures during the first four and a half months of this year, of which $750 went toward attending a recent state party fundraiser. He closed out the reporting period with $70,007.07 in the bank and no campaign debts.

HOW IMPORTANT IS SMITH'S FINANCIAL ADVANTAGE?

Smith was able to set an Iowa treasurer candidate fundraising record because Fitzgerald has never needed to raise a lot of money. The longest-serving treasurer in Iowa and U.S. history has usually been re-elected by comfortable margins even after spending less than some state legislative candidates. Fitzgerald's closest shave was in 2010, when he defeated Dave Jamison by 52.9 percent to 47.0 percent against the backdrop of a massive GOP landslide.

The Republican Party of Iowa put $50,000 behind state treasurer candidate Sam Clovis in 2014, and he spent tens of thousands of dollars on radio or television advertising during the last few months of that campaign. Yet Clovis lost by a 52.9 percent to a 43.7 percent margin in a year when many Republicans won up and down the ballot.

During the 2018 cycle, GOP state treasurer candidate Jeremy Davis raised and spent less than $30,000, which included some social media advertising but no radio or television. He lost by 54.8 percent to 42.7 percent in what was a tougher year for GOP candidates in Iowa.

Fitzgerald could get away with spending so little because he has very high name ID. The familiarity that comes with having served as state treasurer since 1983 helped the Democrat survive Republican waves in 1994, 2010, and 2014.

Perhaps Iowans are less prone to split tickets now, compared to previous cycles. If the Democratic trifecta in Washington produces another GOP wave this November, perhaps Smith can be swept in. But he will need to convince Iowans to mark the ballot for him specifically.

It is ironic that a state law Smith engineered five years ago is one factor working against him now. The 2017 changes to Iowa's election procedures are best known for introducing a voter ID requirement. A lesser-known part of that bill eliminated straight-ticket voting.

When I've discussed the upcoming state treasurer's race with political observers from both parties, all have agreed that Smith would have a better chance if Iowans still had the option of filling in a Republican oval and going home. Forcing voters to mark the ballot for each race could help Fitzgerald pick up thousands of votes from people who supported other GOP candidates but recognize the treasurer's name.

WHAT WOULD IT TAKE TO BUILD SMITH'S NAME ID?

Smith has served in the Iowa Senate for twelve years but isn't well-known outside the Quad Cities area. Even with a political environment favoring Republicans generally, he would probably need to invest a lot in paid media to build a winning campaign.

I looked to Rob Sand's 2018 race for clues on how much it might cost for Smith to defeat an incumbent in a statewide office. Going into that year's election, no Democrat had been elected state auditor in Iowa for decades. Sand shattered fundraising records and was able to spend more than $1.5 million during the last two months before the election. That included $1,186,300 for radio and tv commercials (see here and here) and $152,000 for digital advertising (see here and here).

Sand arguably had an easier task than Smith, because Republican State Auditor Mary Mosiman was much less well known four years ago than Fitzgerald is now. The Democrat's commercials were generally well-received because they were quirky and stood out against cookie-cutter political spots. In addition, Sand had campaigned extensively around the state for nearly a full year before the 2018 general election, giving numerous interviews to local newspapers and radio or tv stations.

That could happen in two ways. Major donors could get behind Smith on a much larger scale in the coming months, sensing an opportunity. Alternatively, the Republican Party of Iowa could put a lot of money into the state treasurer's race. That scenario is likely only if Governor Kim Reynolds turns over a large chunk of her campaign cash to the state party. Unfortunately for Smith, there is no well-funded national group focused on electing GOP state treasurers.