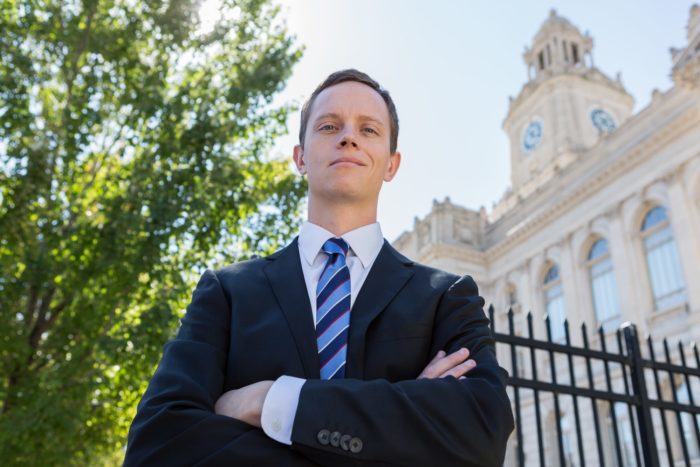 "We have to wake the watchdog up": Why Rob Sand's running for state auditor

The state auditor of Iowa is not a “sexy office,” former Assistant Attorney General Rob Sand told me earlier this fall. “But it’s a huge opportunity for public service, because I think that the way that it’s run right now, there’s a lot of low-hanging fruit for improvement.”

Sand kicked off his candidacy this morning with a website and Facebook page. He’s been tweeting for some time at @RobSandIA. His opening video is here. At the end of this post I’ve enclosed Sand’s campaign committee, including activists and elected officials from many parts of the state as well as Iowa Attorney General Tom Miller and former Attorney General Bonnie Campbell.

Sand discussed with Bleeding Heartland how he would approach the job and why he is running against Republican incumbent Mary Mosiman, a certified public accountant who has served as state auditor since 2013. Although this office is not the obvious choice for an attorney, Sand considers his experience prosecuting white-collar crime “my biggest qualification” and a key reason he could improve on Mosiman’s work. Moreover, he’s not afraid to call out a “historically irresponsible” state budget.

Gary Kroeger’s thoughts on the coming campaign in a targeted Congressional district where Democrats Abby Finkenauer and Courtney Rowe are already running. -promoted by desmoinesdem

October 15 was the deadline for Congressional candidates to report details on their donations and expenditures between July 1 and September 30 to the Federal Election Commission. Highlights from the FEC filings are after the jump.

I didn’t see any big surprises in this quarter’s fundraising numbers from Iowa, though one challenger raised more money than any of the four U.S. House incumbents, which I don’t ever remember happening before longtime GOP Representative Tom Latham retired in 2014.

None of the incumbents spent lavishly on their campaigns between July and September, but Representative Rod Blum was remarkably thrifty.

Congressional candidates were required to file quarterly campaign finance reports with the Federal Election Commission by the end of July 15. Three of Iowa’s four incumbents have no declared challengers yet, so most of the action was in the first district, where Monica Vernon’s filing removed all doubt that Washington, DC Democrats want her to face first-term Representative Rod Blum, considered one of the most vulnerable Republicans in Congress.

Follow me after the jump for details from all of the Iowans’ FEC reports. As happened during the first quarter, one would-be Congressional challenger out-raised each of the four incumbents for the reporting period.

Ravi Patel announced yesterday that he is no longer running for Congress in Iowa’s first district. I enclose below the full statement from the Patel for Iowa website, which says “it has become clear” that a “tough battle for the Democratic primary nomination” would “have diverted energy and resources that should be directed at changing the course of our nation.” Patel added that he will be able to have more influence on “public life in Northeast Iowa […] through the private sector.” He will offer full refunds to campaign contributors, who donated more than half a million dollars during the first quarter of this year alone.

I have no idea what prompted Patel’s decision. The stated reason makes no sense, as “it has been clear” for months that Cedar Rapids City Council member Monica Vernon was the front-runner in this primary, and that she would also raise significant campaign funds. Factor in Patel’s youth and the fact that he has mostly lived in IA-02, and there was never any reason for him to think winning the primary wouldn’t be a “tough battle.” Backers were allegedly getting ready to launch a super-PAC to support his candidacy, a move without precedent in this state.

Before we assume Patel still has a future in Iowa politics, let’s wait to learn more about why he quit this race. Pat Rynard cited a Dubuque Telegraph-Herald article from a few days ago, which showed that Patel “didn’t have much of an answer on some basic issues Congress would face, including the Renewable Fuel Standard and dealing with ISIS.” I find it hard to imagine any highly-motivated candidate would drop out because of some bad press nearly a year before the primary. Rynard speculated that Patel made a “mature” decision to end a candidacy with a low probability of success. If so, good for him, but count me among the cynics waiting for the other shoe to drop.

Patel’s exit leaves Vernon and Gary Kroeger as the only declared Democratic candidates in IA-01. Vernon will be heavily favored. Former State Senator Swati Dandekar, who finished third behind Pat Murphy and Vernon in the 2014 primary to represent IA-01, is considering a repeat bid here. Winning the Democratic nomination would be an uphill battle for Dandekar for various reasons.

Any relevant comments are welcome in this thread. IA-01 Representative Rod Blum is widely considered to be one of the most vulnerable Congressional incumbents.

UPDATE: Representative Dave Loebsack (IA-02) endorsed Vernon on June 24: “She has proven that she is committed to improving the lives of Iowa’s working families. I look forward to having her in Congress along side of me, fighting for the people of Iowa.” Loebsack lived and worked in Linn County (now the most populous in IA-01) for most of his adult life and represented the county in Congress from 2007 through 2012, when it was part of the second district.

Added below statements from Vernon and Kroeger on Patel dropping out.

First-term Representative Rod Blum will be one of the top targets next year for EMILY’s List, the political action committee supporting pro-choice Democratic women announced today.