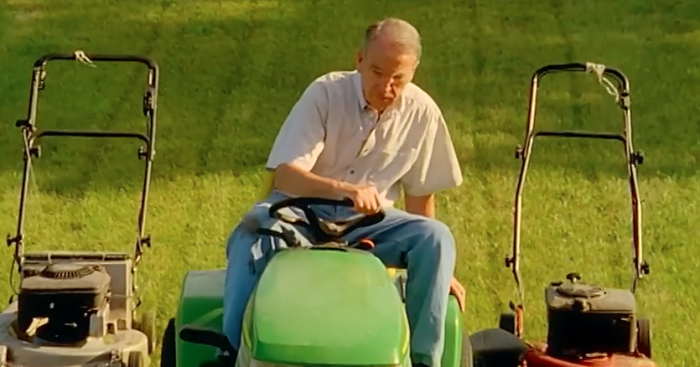 IA-Sen: Chuck Grassley's back on tv, and he brought his lawnmowers

The "barrage" of television commercials promoting U.S. Senator Chuck Grassley's re-election began a few days ago. The senator's campaign stayed off television for most of the summer following short buys for two commercials in late May and early June.

In style and content, the new 60-second ad resembles the first commercials Grassley ran during the 2010 general election campaign. The focus is on the senator's personal qualities and work ethic, not policy accomplishments. The viewer hears about Grassley's past work in factories as well as on the farm, his near-perfect attendance for Senate floor votes, and his commitment to visiting all 99 counties every year. Finally, as Iowa politics watchers have come to expect, the ad includes footage of Grassley mowing his own lawn, using his "cheap" invention of two push mowers attached to the back of a riding mower.

Male voice-over: He's kind of a big deal in Washington, but it never went to his head. [footage of Grassley wearing a suit, walking near the Capitol]

He knows where he came from. Born on a farm. [viewer sees two old photos of Grassley as a young farmer]

Years of farming by day, factory work by night. [then footage of a farm field, then a main street, presumably in the town where Grassley worked in a factory]

Twice he opened his pay envelope to find a pink slip. [footage of a man's hands opening an envelope containing a pink "notice of termination of employment"]

Laid off and worrying about taking care of his family. [footage of Grassley's legs and feet, walking on a sidewalk near the Capitol]

He's traded the factory floor for the Senate floor, but still lives on a farm. [footage of Grassley walking in Washington, then a view of his home near New Hartford; GrassleyWorks.com is visible near the bottom of the screen]

Still shows up for work every day. [footage of Grassley smiling, greeting an unidentified African-American man]

He's never been to the Congressional country club, but he can find every Dairy Queen in Iowa. [footage of Grassley walking back to his car in a Dairy Queen parking lot, eating some treat; then a shot of some other Dairy Queen in an unidentified small town]

It's the work ethic of the farm, the factory, of Iowa. [footage of a rural scene at sunset]

Named the hardest-working senator, but still mows his own lawn. [footage of Grassley riding his mower with two smaller mowers attached behind on either side; words CHUCK GRASSLEY FOR U.S. SENATE are visible near bottom of screen]

Grassley's voice: I'm Chuck Grassley, and I approve this message. [footage of Grassley speaking with a different young family]

The branding of Grassley as "one of us" despite many years of work in Washington has been a staple of his campaign advertising for many years. Ads from his 2010 race against Roxanne Conlin also played up the fact that he has almost never missed a Senate vote and visits every county every year.

Grassley really does have a remarkable streak of more than 7,000 consecutive Senate floor votes. But this summer, Progress Iowa scrutinized the senator's travel schedule and found that the "full Grassley" is not all it's cracked up to be. Specifically, he "has not held an open public event as part of his annual 99 county tour in nearly all of the state’s major population centers, including no public meetings in Polk, Linn, or 8 of Iowa’s most populous 10 counties." You can read the full report on the "Fake Grassley" here.

Democratic Senate candidate Patty Judge is pressing the case that "Washington changed Chuck," who is no longer responsive to Iowans or doing the work that needs to be done for constituents. One challenge for her is that Grassley has far more money to spend on tv ads promoting his message.

While Judge's latest tv ads alluded to Grassley's role in obstructing consideration of President Barack Obama's nominee for the U.S. Supreme Court, I think she needs to refer to that issue more directly. Grassley talks about going to work every day, but as Senate Judiciary Committee chair he has refused to schedule confirmation hearings for Judge Merrick Garland, a decision without modern precedent. Garland is clearly qualified to serve on the high court, whatever one might think about his judicial philosophy. If Grassley is really acting on principle, as he claims, why isn't his campaign bragging about how he is keeping a Supreme Court seat open, in the hope that President Donald Trump will fill it?

Grassley promised this spring that he would not rush through a lame-duck confirmation of Garland in the event that Americans elect Hillary Clinton president. However, speaking to the Sioux City Rotary Club yesterday, he indicated he might change his mind if many of his colleagues urged him to do so, Bret Hayworth reported. The lame-duck confirmation scenario appeals to many Republicans, because Garland is not as liberal as some judges Clinton might appoint to the Supreme Court.

Any comments about the U.S. Senate race are welcome in this thread.

UPDATE: Forgot to mention that while Grassley has repeatedly expressed his support for Trump, he has not appeared on the same stage as Trump since introducing him at a rally shortly before the Iowa caucuses. Grassley was absent during Trump's visits to Davenport and Cedar Rapids in July, and did not appear at a Des Moines rally in early August. This past Saturday, Grassley spoke at Senator Joni Ernst's "Roast and Ride" fundraiser in Des Moines, but he avoided being on stage for a group photo including featured guest Trump.

P.P.S.- Here's a classic Grassley tweet about his lawnmowers: