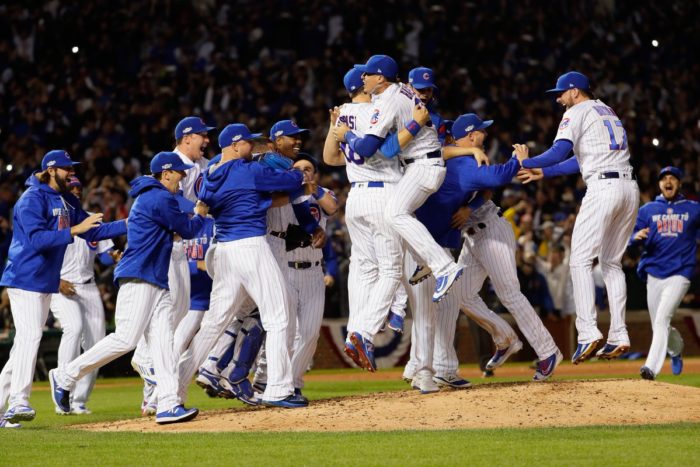 I'm a third-generation Tigers fan--my mother saw Hank Greenberg play at the old Tiger Stadium in Detroit--but most of Iowa is Cubs country. Congratulations to everyone who "Flew the W" Saturday night, watching the Chicago Cubs win the National League pennant for the first time in seven decades. Seeing any long-suffering sports team win a championship makes me happy, so I am glad the next World Series champions will be either the Cubs or the Cleveland Indians. Any thoughts on the potential impact of a Cubs or Indians victory on the election results in Iowa or Ohio?

I shouldn't tempt fate with November 8 two and a half weeks away, but FiveThirtyEight.com now gives Hillary Clinton an 86 percent chance of winning the presidency. The latest simulation by Reuters/Ipsos sees her winning in 95 percent of scenarios. Recent polls of Iowa voters show no clear favorite in the presidential race. I expect a close result here; the latest absentee ballot numbers give both Democrats and Republicans reason to be optimistic. No matter who wins Iowa's six electoral votes, Clinton appears very likely to be the next president.

Until a few years ago, I didn't think a woman would be elected president in my lifetime. Despite all the misogyny and Hillary hate this campaign has brought to the surface, my children's generation will grow up without the baggage of thinking this country would never elect a woman, just like they would never think an African-American can't become president. That's inspiring and empowering.

Any thoughts on which Iowans might get high-profile jobs in a Clinton administration? What place will she find for Tom Vilsack? Politico came up with a short list of five possible candidates to replace Vilsack as secretary of agriculture. (None are from Iowa.)

I've reached out to many Iowa Republicans who have kept their distance from Donald Trump or are rumored not to be voting for him. Most have not responded to my queries. I get that it's a tough political calculation to oppose your party's nominee, especially when the whole Iowa GOP establishment enthusiastically supports him. But I am convinced many of these closeted #NeverTrumpers will regret lacking the courage to take a stand before November 8. Trump is not some less-than-ideal candidate. He is playing to the ugliest strains in American politics. His demagoguery and blood libel encouraged white nationalists to come out from under their rocks, some explicitly playing the race card for votes while others relentlessly harass Trump's critics.

Five former heads of the Republican National Committee, dozens of current and former GOP members of Congress, and four former GOP presidential nominees have said they will not vote for Trump. Fifty former senior national security officials in Republican administrations and a former nuclear missile launch officer have said it would be dangerous to give him the nuclear codes. His narcissism is comical, until you remember this man with no impulse control could become president. Meanwhile, Senator Joni Ernst told the whole country Trump would keep us safer. Ernst pretends to care about sexual assault but will vote for a man who threatened to sue all the women who have accused him of assaulting them. This Iraq War veteran hosted Trump at her biggest fundraiser of the year soon after he insulted a Gold Star family.

In contrast to Ernst, Governor Terry Branstad, or state party chair Jeff Kaufmann, some Iowa Republicans have avoided Trump's rallies or events where they might be seen with the nominee. To them I say: speak up now, or expect your complicity to be a permanent stain on your political career. These people better not claim after Trump's landslide loss that they secretly didn't like him and didn't vote for him.

Hardin County Auditor Jessica Lara told the Wall Street Journal's Reid Epstein this week that she's voting for Hillary Clinton. To my knowledge, she is the only current elected Republican official in Iowa to come out publicly for Clinton. Bleeding Heartland was first to report in May that Lara was #NeverTrump.

This is an open thread: all topics welcome. History buffs may appreciate Radio Free Europe/Radio Liberty's phenomenal interactive site showing pictures of street scenes in Budapest during the 1956 Hungarian uprising and in the present day.