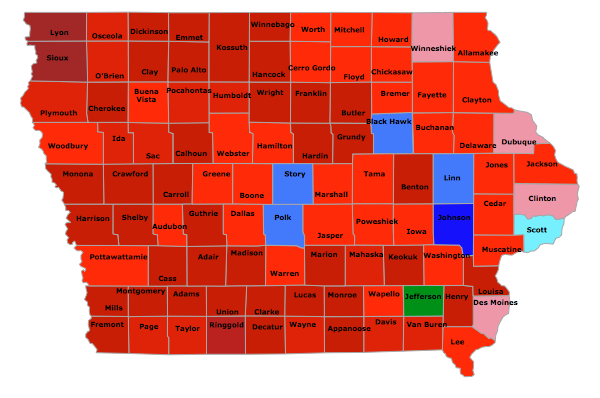 Jefferson County Democrats wanted to vote but not for Clinton. The 2016 Central Fairfield Caucus quickly ran out of space with caucus-goers spilling out of the main room and down the courthouse stairs. But when the counting was done, Bernie Sanders had 73 percent of the Jefferson County Democratic delegates, a larger share than in any other county. (Montgomery was the only other county where Sanders received more than 60 percent of the delegates.) On the Republican side, Donald Trump came in second behind Ted Cruz’s 32 percent. More or less in line with the rest of the state.

The Natural Law Party was founded in Fairfield in 1992. And while it ran several national political campaigns, it is now just another tombstone in the third party graveyard. But in 2016 it still provides a sense for Fairfield’s unique political leanings, and helps explain why a diverse base of local residents found a favorable interpretation of Trump’s message, when he moved into the general election with his sparse 140 character policy points.

There was plenty of more traditional support for Trump as well. Fairfield at its core remains part of rural Iowa, with a diverse range of locally owned businesses intertwined into a regional economy. Many of these businesses feel assailed from all sides. Obamacare, pending overtime pay rules, and the welfare state are poignant sources of concern in the business community. Entitlement programs are a particular worry for Jefferson County, which has a disproportional share of mental health challenges and a low labor force participation rate of 54 percent.

Despite Fairfield’s economic success, the same challenges facing all rural communities confront the County. Problems such as how to fund a shrinking school district and how to provide the amenities necessary to attract young talent continue to confound community leaders. Neither is Jefferson County immune to rural Iowa’s aging housing stock, the slow depletion of core downtown businesses and the trickling loss of locally owned major employers on which the foundations of a strong rural economy are built. Local businesses continue to be acquired, more often than not resulting in the higher paying white-collar jobs being transferred to a faraway company headquarters in an urban area. Attracting investment into new business ventures to sustain innovation and create good paying jobs is notoriously difficult for rural Iowa. Whether Fairfield can continue to replenish lost businesses, as it has thus far successfully done, is a question that has not escaped community leaders’ minds.

The community’s unique culture, strong civic minded business leaders, university presence and net immigration have thus far been its saving grace. But national trends are not favorable to rural Iowa and that is visibly clear, even here. Despite the purported population gains, the greying community is currently embroiled in a school consolidation fight (as well as a highly controversial bathroom transgender use debate) and has seen its housing stock decrease and deteriorate. While small town colleges across the state are struggling, Fairfield’s Maharishi University of Management has thus far persevered with its unique strategy of focusing on attracting international students. But will future immigration policy reverse enrollment trends? If so, the median age in Fairfield, which at 46 is already one of Iowa’s oldest, would skyrocket, and the innovation and energy resulting from having a local university would be lost.

Jefferson County is well aware of the urban-rural divide and the political questions now ominously surrounding it. For years the county has been the exception to the rule, as people from around the US and globe have immigrated to the unique rural enclave. But what will the future hold? While few of these questions are likely to reach resolution in the next two years, Jefferson County will be paying close attention come 2018.