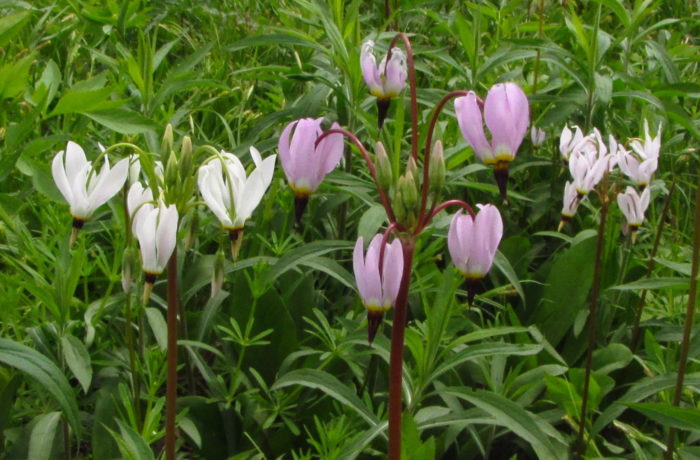 Until this month, I had never seen today's featured wildflowers "in real life." Shooting star (Dodecatheon meadia) is as eye-catching as last week's wild chervil is unobtrusive. Also known as prairie shooting star or pride of Ohio, the plant is native to more than 20 states east of the Rocky Mountains, but it is rarely seen outside "high-quality habitats" including prairies, upland forests, and fens.

The Illinois Wildflowers and Minnesota Wildflowers websites have botanically accurate descriptions of shooting star foliage, flowers, and seed capsules. I took all of the enclosed pictures at Rochester Cemetery in Cedar County in early May. This never-plowed patch of prairie is well worth a special trip or at least a short detour if you're traveling along nearby I-80.

According to Stephen Longmire's book Life and Death on the Prairie,

Iowa’s Rochester Cemetery is one of the most unusual and biodiverse prairies left in America, boasting more than 400 species of plants—337 of them native to the region—on its thirteen-and-a-half acres. Among them are fifteen massive white oaks that stood watch as the surrounding landscape was converted into farmland after Euro-American settlers arrived in the 1830s. The cemetery is the last resting place of these pioneers and their descendants, down to the present. Graves and wildflowers are scattered across hills that geologists consider sand dunes; these are held in place by the deep roots of the plants and people.

Pioneer cemeteries have been recognized as important prairie remnants and seed banks ever since Aldo Leopold, another Iowa native, called attention to them in his landmark essays of the 1940s, as he developed the new field of ecological restoration. At Rochester Cemetery, the drama of the prairie’s survival continues to this day, in a controversy that flares up as reliably as spring’s shooting stars. To botanists across the country, this place is a pilgrimage site. To local residents, it is either a source of pride or a shameful weed lot (some feel regular mowing would show more respect for the dead).

I'd recommend bringing a prairie wildflower guide if you visit the cemetery. A weather-beaten notice board lists some of the native plants that bloom at different times of the year, but does not provide photos to help with identification.

Alma Gaul wrote for the Quad-City Times in 2011 that "People come in droves around Mother's Day to see the spectacular shooting stars."

I expected to have to hunt for this rare plant once I reached the cemetery, but a large colony was growing near the main entrance. You can see why early white settlers reportedly called these flowers "Prairie Pointers."

Some of the plants still had only buds.

Others were starting to bloom.

Most were already in full flower. The blossoms range from white to many shades of pink. A related species, jeweled shooting star, can have even darker pink flowers.

I tried to capture the scale of this massive colony.

The yellow-orange flowers near the bottom of this picture are hoary puccoon, another relatively uncommon native plant.

The bright sunlight didn't help my cause in capturing the shooting star near wild geranium and Columbine.

These yellow flowers are some kind of buttercup, possibly swamp buttercup.

Because it was relatively early in the season, I didn't see any shooting star with fruit growing, but some of these flowers were already past their prime.