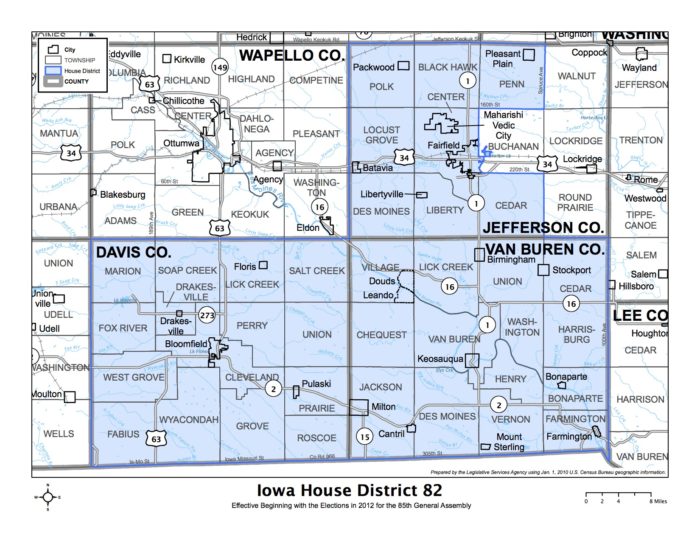 How worried are Iowa Republicans about the special election in House district 82?

Worried enough to try to disqualify the Libertarian contender.

Four candidates are on the ballot for the August 8 special election in House district 82, where voters will choose a successor to the late Democratic State Representative Curt Hanson. Bleeding Heartland previously covered background on the candidates and the recent voting history of this area in southeast Iowa, as well as early television commercials in a race where Democrats and Republicans will spend six figures.

The Libertarian Party gained full political party status in Iowa last year after Gary Johnson exceeded 2 percent of the presidential vote here. As a result, Libertarians can select candidates for special elections through district nominating conventions, like the major parties do. The Libertarian candidate in House district 82 is Josh Miller (not to be confused with Democratic nominee Phil Miller).

Last week, Republicans conducted a below-the-radar attempt to eliminate some competition on the right. From a Libertarian Party of Iowa press release on July 21:

On July 17th, Republican Marshan Roth filed an objection with the Iowa Secretary of State's office over the nomination of Mr. Miller claiming that certain procedural motions were not followed during the LPIA's special nominating convention held July 5th at the Fairfield Public Library, and that ultimately the Libertarian Party of Iowa's nomination of Miller should be ruled invalid and he should not appear on the ballot. Roth, along with another GOP activist, submitted video that they asserted would validate their claim. However, their video did not include the first eight minutes of the Libertarian Party's special convention, and instead captured several references that affirmed all legal and procedural processes had indeed been followed.

On Thursday, July 20th, a panel comprised of Republican Secretary of State, Paul Pate, Democrat Attorney General, Tom Miller, and Republican State Auditor Mary Mosiman met for approximately 90 minutes to discuss these baseless allegations. Following Thursday's unanimous decision of the panel, Josh Miller stated that 'This is a waste of taxpayer resources for Republican Party operatives to attempt to bully a candidate that they feel threatened by off the ballot.'"

A spokesperson for the Iowa Secretary of State's office declined to provide further details on the alleged procedural violations but confirmed that Marshan Roth filed an objection to Joshua Miller's candidacy, and that Secretary of State Pate, Attorney General Miller, and Auditor Mosiman unanimously rejected the GOP's attempt to remove the Libertarian candidate from the ballot.

Roth has been a reliable Republican activist for many years, holding leadership positions for the county GOP and the Iowa Federation of Republican Women. She served as a county co-chair for Senator Chuck Grassley's 2016 re-election bid and signed on recently to support Governor Kim Reynolds' campaign.

Republicans conducted a telephone poll in the district earlier this month to gauge voter sentiment and test messages about Phil Miller and his GOP opponent Travis Harris. I wonder whether the hardball attempt to get Josh Miller out of the way stemmed from poll numbers showing a close race. Libertarians have nominated candidates in quite a few state legislative races, and I cannot recall similar Republican efforts to disqualify them.

The fourth contender in House district 82 is also a conservative; Edward Hee III qualified for the ballot as a Constitution Party candidate.

Regardless of who wins on August 8, Republicans will control the Iowa House for the 2018 session, with either a 60-40 or a 59-41 majority. But the special election is still important as an early sign of which side's base is more energized. For that reason, the outcome could affect both parties' recruiting for other legislative races.

UPDATE: The Iowa Attorney General's Office provided a copy of the complaint. When the panel has finished its written statement denying the objection, I will add that below as well.

Conservative blogger Shane Vander Hart speculated that "Two Republicans (the candidate and another activist)," not the Iowa GOP as a whole, tried this "stupid" tactic. But Jake Porter, the Libertarian candidate for governor, said the Republican Party of Iowa "had several representatives" at the hearing to consider the objection.

As a general rule, party leaders call the shots on battleground Iowa House and Senate races. I find it highly unlikely that Roth and GOP candidate Harris dreamed up and executed this idea on their own.