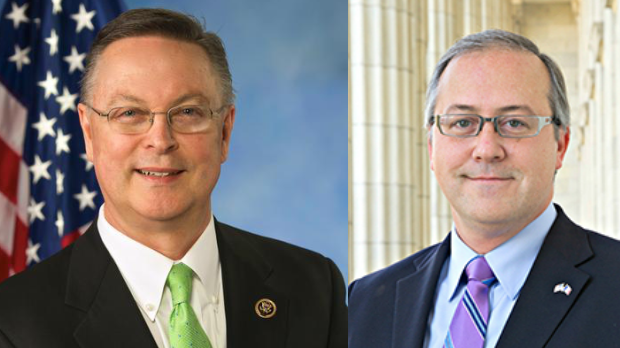 Republican Representatives Rod Blum and David Young have approval ratings below 40 percent and re-elect numbers below 50 percent, according to new surveys from Public Policy Polling.

The Patriot Majority Fund, a super-PAC that largely opposes GOP incumbents, commissioned polls in nine House districts around the country, including the two in Iowa that Democrats will target next year.

Blum's approval rating is well underwater, and he slightly trails an opponent, though her lead is within the margin of error. From an October 10 memo by Public Policy Polling's Anniken Williams:

In Iowa’s 1st Congressional District, Republican incumbent Congressman Rod Blum has an approval rating of 33%, and a majority (51%) of voters say they do not approve of the job he is doing. President Trump has an approval rating of 45% and a disapproval rating of 50% in Blum’s district, while 6% of voters say they approve of the job Congress is doing and 87% say they disapprove. Speaker Paul Ryan is also unpopular with 26% of voters saying they approve of the job he is doing and a majority (61%) responding that they disapprove. These percentages, along with a hypothetical matchup between Democrat Abby Finkenauer (42%) and Blum (40%) indicate that Blum is vulnerable in his upcoming re-election. The new tax plan is not popular in his district, and a plurality of voters (48%) indicated they would be less likely to vote for Blum if he voted in favor of the Republican tax plan.

These numbers are more plausible than the May 2017 poll by Clarity Campaign Labs, which showed an unnamed "Democratic challenger" beating Blum by 47 percent to 32 percent, or by 52 percent to 37 percent "when undecideds are pushed."

While PPP tested Blum against Finkenauer, it's worth noting that four Democrats are seeking the nomination in the first district. Finkenauer has substantial support from organized labor, prominent Democratic officials, and advocacy groups including EMILY's List and the National Abortion Rights Action League. She has also raised the most money so far, though one of her rivals, Thomas Heckroth, had a good fundraising quarter and has quite a few endorsements. Next week Bleeding Heartland will publish highlights from this year's Iowa Congressional campaign finance reports.

UPDATE: The Cook Political Report changed its rating on IA-01 from "lean Republican" to "tossup" on October 13.

The 20 counties in IA-01 contain 159,736 active registered Democrats, 142,640 Republicans, and 189,857 no-party voters, according to the latest figures from the Secretary of State’s office. Here are links for the Democratic candidates, in alphabetical order:

The sixteen counties in IA-03 contain 162,027 active registered Democrats, 174,229 Republicans, and 167,768 no-party voters, according to the latest figures from the Secretary of State’s office.

PPP didn't name a challenger for Young because none of the seven Democrats running against him is a clear front-runner. Here they are, in alphabetical order:

The Patriot Majority Fund ran television commercials in May against two House Republicans who voted for the GOP alternative to the Affordable Care Act, as did Blum and Young. For a taste of what Iowa's GOP incumbents might face next year, here's the super-PAC's spot against Representative Fred Upton of Michigan: