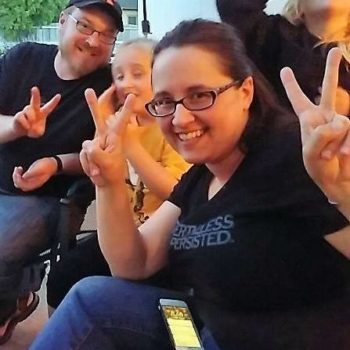 Y’all, we’re about to hit the anniversary of the worst day ever and I’m maxed out on rage. I’m beyond maxed out. I’ve reached a level of chronic underlying frustration and anger that is simply unsustainable, and I know I’m not the only one.

As a recovering addict AND a person with a diagnosed mental condition, I’m familiar with what “unsustainable” feels like. It impacts work, relationships, and ability to take care of your basic shit. It traps you in what feels like an inescapable situation of being unable to stop but also being unable to keep going on. So I know when I’ve hit a point where this is just not going to work, and I know I’m there, and I think a lot of other people are there, too. Rage is not an unlimited resource. It is the fossil fuel of our movement. It’s gotten us this far but we will run out. And it’s not good for us.

So here’s my proposal.

Let’s forget about unity for awhile. Our feelings are all still hurt, on both “sides.” Everyone is obviously and clearly aware that we are at an impasse, with each side becoming more and more angry and righteously indignant. I know I still feel that way at times. Feelings are still raw and nothing’s gonna fix that but TIME. We can WISH we could skip to the part where we’re all copacetic but it’s going to take time. Let’s just own that and be ok with it. We’re just not there yet. What we need is a strategic alliance.

Once, during a massive fight, my husband asked me what mattered more, “being right or maintaining our relationship?” This has stuck with me and is often the ultimate question I have to ask when considering doing what seems unthinkable. We’re fighting about who is right, and the more we do that, the deeper we dig our resentment. It gets us nowhere. I don’t think there’s any good ending when one half of the group has to capitulate to the other. It’s a Pyrrhic victory for whomever comes out on top. That won’t serve our goals. But that doesn’t mean we have to love each other while we do the work of saving each other and our communities.

George Lakoff has written that Dems mistakenly see Republicans as fractured and therefore weak, when in fact their disunity makes them stronger (at least before 2016 this was true). Right now, Dems are disunited, but we can use that to our advantage instead of seeing it as a sign of inevitable decline. So let’s drop the facade; we don’t have to like or love each other right now, and we don’t fully agree, but we can work together. What we need isn’t unity; we need a strategic alliance.

History, movies, comics — a major theme has always been unlikely allies working together to defeat a greater evil. Buzz and Woody. The Goonies. Guardians of the Galaxy. Castiel and Crowley. Murtaugh and Riggs. Dillon vs Dillon East. I’d so much rather be in one of those movies than the one I’m in right now. This movie currently sucks.

So I’m offering a truce to my Bernie-loving allies in this historic time:

- I’ll stop talking shit about Bernie publicly. I can’t make promises behind-the-scenes; I think a safe space to vent is necessary and I’m sure you need it as well. But I’ll keep it off Twitter and off my Facebook feed. And if I see fellow HRC folks being unnecessarily hostile in public I will call that out. I’ll save the hostility for Trump/GOP. Would appreciate reciprocation on this.

- I will release control on some things I have strong feelings about and let y’all run with the ball. I’m skeptical about the single-player plan but, hell, it’s better than nothing, which is what we have right now. At this point I have to not let the perfect be the enemy of the good (ironic, because this is often a problem I have with “progressives”). Eyes on the prize. Would appreciate reciprocation on this.

- I’ll bring my talents and strengths to work alongside yours to accomplish some goals. I like plans, I like getting things done, so I’ll bring that to the table. In this way, we will combine our super powers for the good of the land. Our Venn diagram overlaps nearly completely. There’s no logical reason we can’t accomplish things together, even if we aren’t BFFs.

- I’ll be an advocate for new liberal/Dem candidates to receive a fair shot from party leaders, especially at the local level.

I want the legislature back. I want the governorship back. I want Trump gone. I think we all do. So let’s try to find some humor and some cooperation, both of which are more renewable and less toxic than anger, and all just get along until we get our feet back under us.

Top image: Photo of Lauren Whitehead after she won the special election for a Solon City Council seat in May. Used with permission.