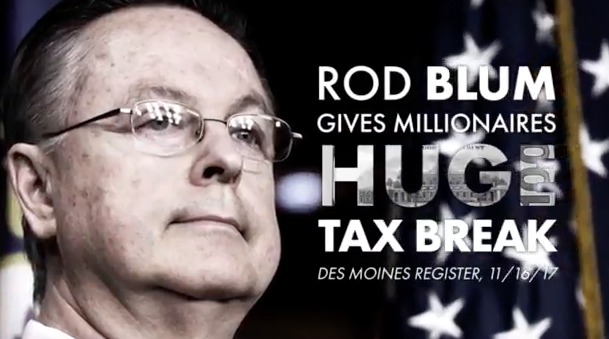 Voters in Iowa's first district favor an unnamed Democrat over two-term Representative Rod Blum by 51 percent to 43 percent, according to a new survey by Public Policy Polling. Respondents in the same survey opposed the tax bill U.S. House Republicans approved last month by a 50 percent to 44 percent margin.

The Not One Penny coalition, formed in August to oppose any tax cuts "for millionaires, billionaires and wealthy corporations," commissioned the survey in IA-01 and five other Congressional districts. The group has also launched a new round of television commercials targeting Blum and Representative David Young in Iowa's third district. Not One Penny previously ran television commercials in August in IA-01, IA-03, and six other Republican-held House districts.

Meanwhile, the End Citizens United political action committee confirmed yesterday that Blum is among the "Big Money 20" Congressional Republicans it will target in 2018.

Not One Penny didn't release full results or cross-tabs from Public Policy Polling's survey of 677 voters in Blum's district on November 27 and 28 (margin of error plus or minus 3.8 percent). The polling memo provided the following highlights:

50 percent of IA-1 voters are opposed to the tax plan recently passed by the House (including 39 percent who strongly oppose the plan) while just 44 percent are supportive (only 22 percent strongly support). Moreover, among the 49 percent of voters who have heard, seen, or read “a lot” about the plan, opposition to the tax proposal rises to 59 percent compared to just 40 percent who are supportive. The more voters are paying attention to the tax plan, the more they hate it.

In addition, individual provisions of the tax plan are just as, if not more, opposed by voters in IA-1, including:

Furthermore, most IA-1 voters believe the wealthiest Americans would be the top beneficiaries of this tax plan – 61 percent think the wealthiest households would benefit more, while just 33 percent think the middle class will benefit more. Additionally, 60 percent would be less likely to support the tax plan when informed that passage would trigger a $25 billion cut to Medicare.

Finally, looking ahead to next year’s midterm elections, a generic Democratic opponent already leads Congressman Blum in a hypothetical 2018 election matchup by 8 percentage points (51 percent to 43 percent), but his vote for the tax bill further hinders his likelihood to win re-election: 54 percent say they are less likely to vote for him because he supported this legislation.

The memo didn't include any findings on Blum's favorability or job approval. PPP measured the incumbent's approval at just 33 percent last month.

Public Policy Polling didn't test Blum against an unnamed Democrat in its last two IA-01 surveys, so it's hard to say whether an 8-point lead for a generic opponent represents slippage for the incumbent. A PPP poll taken the first week of November, commissioned by Democratic candidate Thomas Heckroth, found Blum trailing Heckroth as well as Democratic candidate Abby Finkenauer by 1 point, within the margin of error. In early October, PPP surveyed IA-01 for the Patriot Majority Fund and found Finkenauer led Blum by 42 percent to 40 percent, also within the margin of error.

The new Not One Penny commercial hammers on some of the unpopular features of the House Republican tax bill, saying the plan gives millionaires like Blum a big tax break while raising taxes on 36 million middle-class families. It also cites the AARP as saying that ending the medical expense deduction "means a tax increase for many older Americans." Here's the video:

The spot Not One Penny aired in IA-01 in late August and early September made a more general case against Republicans approving tax cuts that would benefit their wealthy donors:

The tax bill will also be a key theme of anti-Blum messaging from the End Citizens United political action committee. That group spent $117,377 against Blum during the 2016 election cycle and put him on its top target list for 2018. The PAC's new page on Blum explains why he's among the "incumbents who represent the worst of Washington’s rigged system":

• Blum willingly sold out his constituents to please his donors and gave tax breaks to the mega rich. For example, Blum repeatedly did the bidding of some of his biggest campaign contributors. During the health care fight this spring, mega-donors — who stood to gain millions in tax breaks from an ACA repeal — threatened to withhold contributions from GOP Congress members if they didn’t vote ‘yes.’ While the secret money group American Action Network — which had previously spent nearly $700,000 supporting Blum’s campaign — ran an ad campaign pressuring the Congressman, Blum flipped his vote from a hard ‘no’ on repeal to a ‘yes.’ In doing so, Blum put more than 40,000 people in his district at risk of losing health insurance.
• Blum sided with the Koch Brothers and Club for Growth against the Export-Import Bank, despite the $42 million it supported in exports in Blum’s district. Both the Kochs’ and Club for Growth became major supporters of Blum.
• Blum voted for the tax bill, the top priority for Republican mega-donors. It would raise taxes on 13 million Americans who earn less than $100,000 a year, while half of the benefits would go to the top one percent in the country.
• Blum voted for a bill backed by the mega-donor Koch brothers that seeks to keep Iowa voters in the dark about funding sources for secret money organizations. He also voted to block a constitutional amendment to overturn Citizens United.

In early November, End Citizens United endorsed Finkenauer, one of four Democrats running against Blum. The others are Heckroth, Courtney Rowe, and George Ramsey III.

Any comments about the IA-01 race are welcome in this thread. The latest figures from the Iowa Secretary of State’s office indicate that the district's 20 counties contain 159,352 active registered Democrats, 142,538 Republicans, and 191,620 no-party voters.

“Blum represents a rigged system that puts mega-donors and the special interests above Iowa families,” said Tiffany Muller, president of End Citizens United. President Donald Trump “was elected on a promise to drain the swamp, but things are only getting worse in Washington. Rod Blum is one of the worst offenders, and we will hold him accountable.”

“Let me get this straight: an out-of-state political action committee that wants to end money in politics is proud to announce it is spending $35 million on political attack ads?” he said. “And against Congressman Blum, whose goal is to drain the swamp and has introduced or co-sponsored legislation to enact term limits, ban lobbying, ban taxpayer-paid first class travel, ban luxury car leases, cut members pay and end the congressional pension?”

Top image: Screen shot from a new tv ad Not One Penny is running in Iowa's first Congressional district.