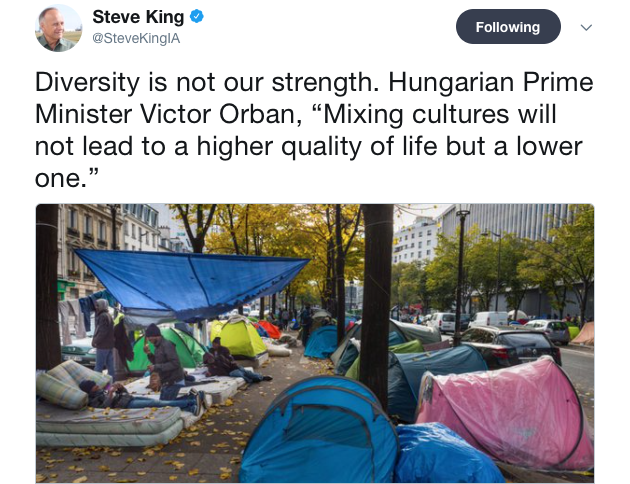 Yet again, the Iowa Republican establishment is looking the other way.

King has found kindred spirits in various right-wing European leaders as he beats one of his favorite drums, about the alleged threat posed by immigration. The Dutch politician Geert Wilders inspired King's notorious comment earlier this year: "We can't restore our civilization with somebody else's babies."

Early on the morning of December 8, King tweeted that "Diversity is not our strength" as he quoted Hungarian Prime Minister Victor Orban:: “Mixing cultures will not lead to a higher quality of life but a lower one."

Diversity is not our strength. Hungarian Prime Minister Victor Orban, “Mixing cultures will not lead to a higher quality of life but a lower one.” https://t.co/ZlMXzcc87w

Assimilation has become a dirty word to the multiculturalist Left. Assimilation, not diversity, is our American strength.

Commenting on King's appeal for "assimilation," Brian Guillaume quipped, "Weird that @SteveKingIA would come out so strongly against the celebration of Dutch Culture and the Tulip Festival in Sioux County." It's funny because we all know conservatives like King are only worried about immigrants preserving their heritage when with those immigrants have darker skin or adhere to a different religion.

Last month, Governor Kim Reynolds proudly announced that King would co-chair her campaign, only one day after complaining to reporters about the lack of "civil discourse" in our "vicious" political climate.

Yesterday, neither Reynolds nor anyone representing her office or her campaign said a word about King denigrating diversity and "mixing cultures." (The governor's staff have continued to send out press releases this week while the Reynolds is on vacation.)

In a statement enclosed in full below, Iowa Democratic Party leader Troy Price called on Reynolds to "do the right thing for the people of Iowa and immediately remove Steve King from her campaign committee,” saying "King’s brand of racist, divisive politics is simply unacceptable and flies in the face of the values of fairness and community that unite Iowans." Gubernatorial candidate John Norris tweeted at Reynolds, "your campaign chair is disgusting. Iowans don’t deserve King’s racist comments & those comments make us all look like fools. Show some leadership & kick him off your campaign committee."

It won't happen for lots of reasons. Reynolds knew King's long history of offensive statements when she endorsed him in last year's Republican primary to represent the fourth Congressional district. Her chief of staff Jake Ketzner managed King's 2012 campaign before running the Branstad/Reynolds re-election effort in 2014.

As usual, Republican Party of Iowa leader Jeff Kaufmann has said nothing about the latest display of King's bigotry. Kaufmann might denounce racist sentiments expressed by Republican small fry, but not when elected officials are involved.

I haven't seen a single GOP office-holder criticize King's December 8 sentiments. The most influential Republican to speak out was King's longtime detractor Nick Ryan, who called the congressman "Disgusting...racist...pig."

I'll update this post as needed, in the unlikely event some Iowa Republican does the right thing.

Des Moines, IA –Today, in light of Representative Steve King’s tweet saying “diversity is not our strength” and warning against “mixing cultures,” the Iowa Democratic Party is calling on Governor Kim Reynolds to immediately remove him as Chair of her campaign and denounce his hateful comments.

Steve King’s ideology is not only a threat to the civility needed to have bipartisan debate, but an insult to the founding values of our country and the protections laid out in our Constitution.

“Governor Reynolds needs to do the right thing for the people of Iowa and immediately remove Steve King from her campaign committee,” said Iowa Democratic Party Chair Troy Price. “Steve King’s brand of racist, divisive politics is simply unacceptable and flies in the face of the values of fairness and community that unite Iowans. His presence as a leader if her campaign sends the message that Kim Reynolds believes our state should be free of any diversity. If she truly believes that Iowa is welcome to all, then she must remove Steve King from her campaign, and do it immediately.”

UPDATE: Kaufmann didn't have the guts to criticize King's views, but he posted the following tweet on December 10:

My views on diversity are best summed up by President Reagan: “[We]'re filled with the spirit of our land in all of its magnificent diversity...We Americans come from every continent...Ours are the faces of all humanity, just as our nation was built by the hopes of all humanity.”

SECOND UPDATE: At a December 12 press conference, Reynolds said of King's tweet about diversity, "I strongly, strongly disagree." However, she declined to remove him as a campaign co-chair: "I completely disagree with what he said. I have a lot of co-chairs that have signed up to support our campaign. ... I'm not going to agree with everything they have to say." The governor then tried to depict King's racism as a minor social media phenomenon: "I'm not going to get involved in the Twitter war."

If Reynolds found King's racist views repellent, she wouldn't want him to be associated with her campaign.