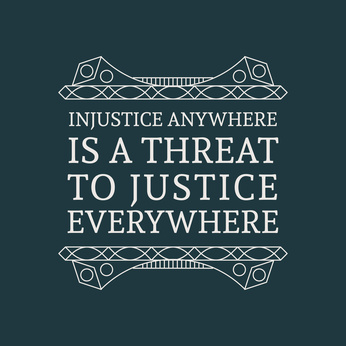 The African-American Museum of Iowa (55 12th Ave. SE in Cedar Rapids) is offering free admission between 10:00 am and 4:00 pm, with children’s activities between 11 and 3. After the regular opening hours, the museum is hosting a job fair and a free screening of the movie “Hidden Figures.” On January 25 from 6:30 to 7:30 pm, museum staff will hold an event at the North Liberty Public Library highlighting “the fight for equal rights, both nationwide and in the state of Iowa. Featured individuals include Alexander Clark, the man who helped desegregate Iowa schools in 1867, and Edna Griffin, the woman who led sit-ins at the Katz Drugstore in Des Moines in 1948.”

I enclose below excerpts from a few articles related to racial inequality or the civil rights movement. Bleeding Heartland has compiled other links related to this holiday or to Dr. King’s work here, here, here, here, and here. The quote pictured at the top of this post first appeared in Dr. King’s “Letter from a Birmingham Jail” (April 1963).

Many politicians will quote the civil rights icon today. If Iowa lawmakers want to honor his legacy, they could pass some of the criminal justice reform bills introduced in recent years, or other ideas advocated by the NAACP. Instead, members of the Iowa Senate and perhaps the state House are likely to debate a bill to reinstate capital punishment this year. Many years of data point to racial disparities in how the death penalty is applied. (Rod Boshart’s reporting suggests the death penalty bill probably will not pass.)

Last year’s detailed study on “The State of Black Polk County” is essential reading on the persistent racial disparities affecting African Americans in Iowa. The report disproves ignorant statements like Representative Steve King’s tweet over the weekend, “The oppression of black people is over with… blacks are, today, a free people.” I flagged some of the most striking findings in this post, but there’s much more to learn from the yearlong research project led by The Directors Council and State Public Policy Group.

“This report excavates the enduring truism that American public schooling is, and has been, profoundly unequal in the opportunity delivered to students, the dollars spent to educate students, and the determinations of which students are educated together,” writes the commission’s chair, Catherine Lhamon. […]

The problem, according to the commission’s report, is that too many schools remain segregated along racial and/or socioeconomic lines with too much inequity in funding from state to state, district to district and school to school, especially when research shows that students living in poverty often show up to school needing extra help and extra resources.

During the month of January, the Coralville Public Library is displaying documents civil rights activist Eric Morton donated to the University of Iowa in 2014. Morton wasn’t from Iowa, but during the “Freedom Summer” of 1964, he assisted voter registration efforts in Mississippi and became friends with Iowa undergraduate Steve Smith. Many years later, Smith donated his civil rights files to the university, and Morton wanted his records “to be housed alongside Smith’s.” According to a university news release by David McCartney,

An African American man who grew up in Detroit, Morton (1934–2015) was very familiar with racism in the country that he served as an enlisted member of the U.S. Armed Forces during the Korean War in the early 1950s. He joined the Student Nonviolent Coordinating Committee in about 1962, and for the next several years was on the front lines in the Deep South, participating in voter registration drives and other civil rights–related activity. […]

His papers bring directly to us the exhilaration and pain that the civil rights movement came to represent for those who fought bravely for rights that, by any measure, should never have been denied in the first place.

American Libraries magazine published a fascinating interview this month with “five leading African-American librarians about their careers, the changes they have witnessed over the decades, and the current issues in librarianship.” Excerpts:

Robert Wedgeworth: Libraries have to be responsive to their constituents, and they need to present themselves as a place where people can find information that helps to explain and understand the current issues affecting their lives. That has been a very important role for libraries over the years, and it will continue to be one. It’s not the social issue itself but that the library can be an active place in helping people to respond to issues as they present themselves.

In the 1960s, librarians were asking what extent they should be active participants in protests and combating certain topics. That continues to be a question raised in the ranks of professionals, and it will always be controversial. Different people will feel different levels of responsibility in dealing with various circumstances, but there will always be a professional role to helping people understand what’s going on in their lives and in their world.

Alma Dawson: First of all, people need information. If they’re just running on emotion, they don’t have the correct info. If we’re talking about Black Lives Matter and other issues of the day, the library has background information that is not just emotional. They have the history right there. When the hurricanes came, people went to the library because that’s where they could connect with family and the community. Librarians can be the right group of people to help. […]

[Gladys Smiley] Bell: Even today, librarians of color have stories of racism, either overt or subtle, with regard to tenure and promotion. When I came up for tenure in the 1990s at Kent (Ohio) State University, I faced opposition and a lot of adversity from people who I thought knew me, with stupid questions about not having enough non-African-American references. […]

Wedgeworth: There are a lot more opportunities within the field for minorities. The problem is the library field doesn’t reach broadly enough to attract people into the field. We are mostly recruiting people who have worked in libraries or who are relatives or friends of librarians and know what librarians do. We haven’t been able to reach more broadly into undergraduate talent to fill various kinds of positions in libraries. We need students with backgrounds in the sciences and economics, but we don’t tend to reach out to attract those kinds of people.