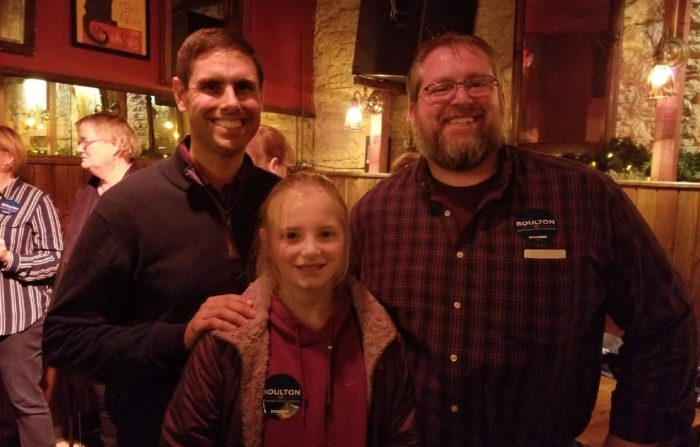 I am supporting Nate Boulton for Iowa governor because a year ago I saw him out front with Iowa Democrats who, against near-impossible odds, fought back on behalf of Iowa families like mine.

I am supporting Nate Boulton because I saw him fight for teachers and education funding. He fought in the Senate, and he marched with us outside the building where the Iowa Senate meets.

I am supporting Nate Boulton because I saw him fight for workers’ fundamental rights to speak for themselves.

I am supporting Nate Boulton because I saw that others who I respect were seeing the same things I was. Over two dozen labor groups and another couple dozen of state lawmakers who I have also watched fight for all Iowans. Good and smart public servants like Senators Joe Bolkcom, Liz Mathis, Bill Dotzler, Rita Hart, and Representative Amy Nielsen, just to name a few.

I am supporting Nate Boulton because he has a clear plan of how he can start on Day One of his term using the powers of the Governor to help Iowa – from ending the Reynolds administration’s nightmare Medicaid privatization to ordering the reopening mental health facilities closed by Branstad.

I am supporting Nate Boulton because I see him building support across the state, from cities to farms, from my current hometown of Iowa City, to my former homes in Waterloo and Mason City, and to where I grew up in rural Clinton County. If we nominate him in June, he is the candidate who can win the whole state in November.

But most of all, I’m supporting Nate Boulton because I trust him to fight for the most important thing in the world to me: the future of my two elementary school aged kids. I trust him not just because of what I saw him do in the senate or on the campaign trail. That's absolutely vital, but one more seemingly little thing really struck a chord. We ran into each other after the University of Iowa Homecoming parade, and not only did he remember me by name after only one or two brief meetings, but the first thing out of his mouth wasn’t about his race for governor. It was to ask about my son, whom Nate had heard missed the parade because the boy was sick (just a cold, thankfully). I’m a big sap of a dad, so that stuck with me.

I am supporting him because in addition to all of those necessary qualifications, I see that he is a decent human being.

Shawn Harmsen grew up in a blue-collar family while going to rural Iowa public schools, went to Wartburg College in Iowa, worked as a radio and TV journalist in the state, got a Masters at UNI, a Ph.D. in Journalism and Mass Communication from the University of Iowa, and currently works as an adjunct professor at Coe College in Cedar Rapids. He lives with his wife and two kids in Iowa City, where his most recent progressive political activism was to manage the successful city council campaign of Mazahir Salih.